Above: A group of journalists demanding that the long-standing recommendations of the Majithia Wage Board be implemented. Photo: Blog/terasyadav

While the apex court says it is mandatory for newspaper managements to implement the Majithia Wage Board recommendations, much will depend on how it’s implemented

Have the terms of employment of working journalists been finally recast and rewritten? On paper, the June 19 judgment of a division bench of the Supreme Court may well have just done that. It mildly pulled up several newspaper managements for their failure to honour the February 7, 2014 apex court order which had upheld the recommendations of the Majithia Wage Board for working journalists and newspaper employees and ordered its implementation. The Court, while delivering its verdict in 83 contempt petitions filed by journalists, made it clear that henceforth newspaper managements would have to comply with the Wage Board’s recommendations and cannot hide behind the excuse of heavy financial losses to deny journalists the prescribed wages and benefits.

But journalists active in unions point out that there are grey areas in the Working Journalists Act 1955 and in the judgment which could still be exploited by newspaper managements to avoid or delay compliance with the Wage Board awards. In fact, senior journalist R Rajendra Prabhu in a review prepared for the National Union of Journalists (India) while lauding the judgment at length added this caveat in the concluding paragraph:

“As for compelling managements to pay new salaries, it all depends upon the pressures the unions can exert. The unions have been demanding many important changes in the Working Journalists Act to better implement the vision that central governments so far held out to workers. We are facing decades of neglect by newspapers to implement wage board awards… However, the SC cannot be expected to give you tools… Journalist members with non-journalists beside them must make unions strong enough to force employees to implement what the law and courts have given them.”

The subtext of what he says is this: the apex court had perhaps not conclusively addressed the issue of non-compliance. It has avoided drawing up a course of action or a time-frame that the managements have to follow.

Gurbir Singh, former executive editor of Businessworld who has been following wage board cases closely since the 1980s, articulated this point to India Legal: “The judgment merely reiterated what the Supreme Court had already said in its 2014 order, except that it offered clarity on a few issues. However, there is no direction or mechanism formulated as far as implementation is concerned or any mention of penalties for managements who refuse to comply. This, I would say, has left a gaping hole in the judgment delivered by Justices Ranjan Gogoi and Navin Sinha.”

According to him, the task of ensuring that the Wage Board recommendations translate into action has been left totally to state governments and their labour departments. This is the process which has been followed ever since 1955 when the Working Journalists Act came into effect. “There have been several court orders and five wage boards before this one but you will see that their recommendations were partially implemented or ignored by several newspaper owners,” adds Singh. He fears that this trend may be perpetuated despite what many see as a favourable judgment from the apex court.

Recommendations of the Majithia Wage Board: 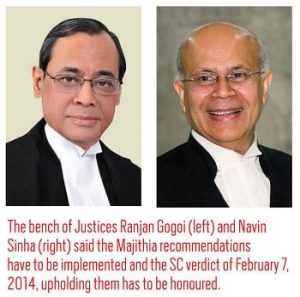 To its credit, the bench of Justices Ranjan Gogoi and Navin Sinha made the following pertinent points in its judgement:

But despite the terms drawn up, the judgment is also seen as having been soft on managements. For one, it has rejected the plea of initiating contempt proceedings against them, saying that there was no willful attempt to disobey the court’s earlier orders. In fact, the bench provided some measure of relief to the errant managements by offering them one more opportunity to comply with the Wage Board recommendations.

Review of the judgment for the National Union of Journalists (India) said compelling managements to pay new salaries depends upon the unions.

The judgment says: “The default alleged though is unmistakably evident to us, in the absence of any wilful or deliberate intention to commit the same cannot make any of the newspaper establishments liable for contempt. On the other hand, they are entitled to one more opportunity to implement the Award in its proper spirit and effect…”

As for recovery of dues, the bench stuck to the provisions in the Working Journalists and Other Newspaper Employees (conditions of Service) and Miscellaneous Provisions Act, 1955.  Section 17 of the Act deals with recovery of money due from an employer. It states: “Where any amount is due under this Act to a newspaper employee from an employer, the newspaper employee himself, or any person authorised by him in writing in this behalf, or in the case of the death of the employee, any member of his family may, without prejudice to any other mode of recovery, make an application to the State Government for the recovery of the amount due to him, and if the State Government, or such authority, as the State Government may specify in this behalf, is satisfied that any amount is so due, it shall issue a certificate for that amount to the Collector, and the Collector shall proceed to recover that amount in the same manner as an arrear of land revenue.”

It has thus left it to the petitioners in the case to continue their individual legal battle in the revenue courts (a time-consuming process) to recover the backlog of dues from November 11, 2011 when the Wage Board recommendations came into effect. Many of the 82 petitioners in the case have already lost their jobs—some of their services were terminated after they threatened managements with court cases for not abiding by the Majithia award.

Also, the Court in its verdict noted that the rules laid down in the Act must be followed in future disputes involving recovery of dues. To quote: “It would be more appropriate to resolve such complaints and grievances by resort to the enforcement and remedial machinery provided under the Act rather than by any future approaches to the courts in exercise of the contempt jurisdiction of the courts or otherwise.”

Sujata Madhok, general secretary of the Delhi Union of Journalists, is guarded in her enthusiasm about the judgment because it falls back upon the existing mechanism as far as recovery of dues is concerned. She said: “You could say the judgment a mixed bag. The court has provided clarity on certain issues but it has left it to the journalists who filed the contempt petitions to recover dues by approaching the revenue courts. That is going to be a time-consuming process. Most journalists will not have the resources or the patience to pursue cases for years.” 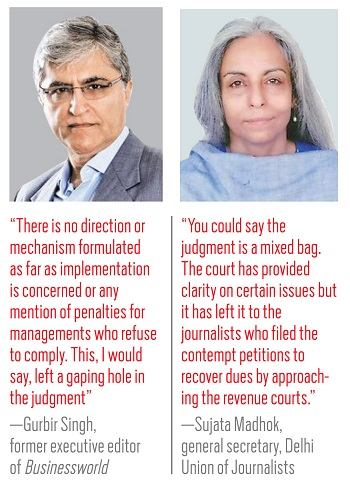 Parmanand Pandey, a lawyer who fought the contempt case for journalists, told the media that he was disappointed with the judgment which did not spare a thought for the petitioners and hundreds of employees who had been retrenched ever since the Majithia Wage Board award came into effect in 2011.

“The court has fully glossed over the pathetic plight of those employees who had been dismissed or transferred to faraway places, whose only fault was that they had prayed for the implementation of the award. This amounted to aggravating the contempt of court but the honourable court has simply ignored it causing further depression among the employees,” Pandey told a media website.

In the final analysis, the judgment does come as a shot in the arm for journalists but with several riders. The managements on their part have so far not reacted to the judgment. But insiders say that the implementation of the Majithia Wage Board recommendations is likely to trigger further downsizing in the name of “cutting costs”—an expression which has much currency at management meetings.