No Time to Lose

Rarely has a chief justice assumed office in the midst of such hope. As he was sworn in by the President, CJI-designate Justice Dhananjaya Yashwant Chandrachud looked like a man in a hurry to get down to the task at hand.  India Legal tracks his first day on the job. 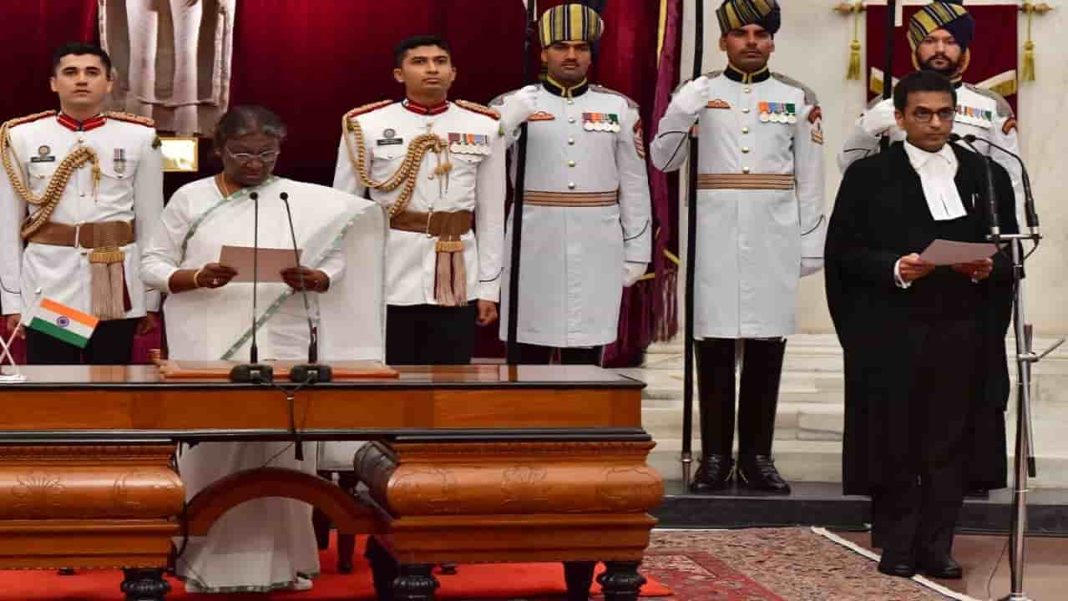 A sea of suits, formal and traditional, and the assorted colours of resplendent sarees and turbans all surrounded by the white ceremonial uniform of the Presidential Guard presented a solemn image in the Durbar Hall of Rashtrapati Bhavan on Wednesday, November 9, 2022. The occasion was the swearing-in of the 50th Chief Justice of India. The man in the spotlight, CJI-designate Justice Dhananjaya Yashwant Chandrachud, sat on a chair separate from the audience, waiting for President Droupadi Murmu.

Soon after her ceremonial arrival, President Murmu read the oath to Justice Chandrachud, who earlier had sung the national anthem along with his predecessor, Justice UU Lalit, in the audience. Justice Chandrachud then greeted the President with a namaste and signed the ceremonial register, and became the 50th Chief Justice of India.

In his moment of ascension to the highest judicial office in the land, Chief Justice Chandrachud moved to where his family was seated and touched the feet of his elderly relatives. He then returned to his solitary chair, as lonely as the perch from which he will adjudicate for the next two years in line with the Constitution. A final singing of the national anthem brought the ceremony to an end.

After his swearing-in and the usual round of congratulations, he returned to the Supreme Court for the first time as the Master of the Roster. His ascension to the Supreme Court’s highest position comes almost 45 years after his father, Justice Yeshwant Vishnu Chandrachud, became the 16th CJI in very turbulent times for the young republic. Incidentally, both Chandrachud Senior and Chandrachud Junior became chief justices of the Supreme Court under non-Congress governments.

The first thing Chief Justice DY Chandrachud did on his return to the Supreme Court premises was to garland the statue of Mahatma Gandhi by ascending a ladder and praying in front of the Father of the Nation. He then spoke to the media, and said it was a great opportunity and a great responsibility at the same time. His first words were to let his work speak for itself.

With his wife Kalpana Das by his side in a pastel green saree, the CJI went to his new chambers and prayed again to the deities in the office puja enclosure and the Tricolour.

After the ceremonies were over, it was back to business for CJI Chandrachud. The bench headed by him and comprising Justice Hima Kohli and Justice JB Pardiwala was hearing an appeal of the state of Tamil Nadu challenging the relief granted to a safai karamchari by the Madras High Court.

In his first case since becoming CJI, Chandrachud remarked: “A man served the school for 22 years. At the end of these 22 years, the person goes home without gratuity, pension etc. This is the lowest strata of our society. How can the government go against a poor sweeper? The might of the government against a safai karamchari? Sorry. We are dismissing.”

Before rising for the day, CJI Chandrachud observed: “I could not take up some cases today since we assembled late. I hope it is only once in my career that I am late since I was sworn in,” he quipped with a laugh.

The expectations from CJI Chandrachud are great indeed.

Did you find apk for android? You can find new Free Android Games and apps.
Share
Facebook
Twitter
Pinterest
WhatsApp
Previous articleVoices from the Bar
Next articleGauhati High Court constitutes committee to assess ground reality of road construction in Nagaland