Voices from the Bar

As Justice DY Chandrachud takes office, expectations soar high among the legal fraternity. Bar Associations and Bar Councils from across India have given their felicitation messages and voiced the hopes of their respective organisations. A report by India Legal. 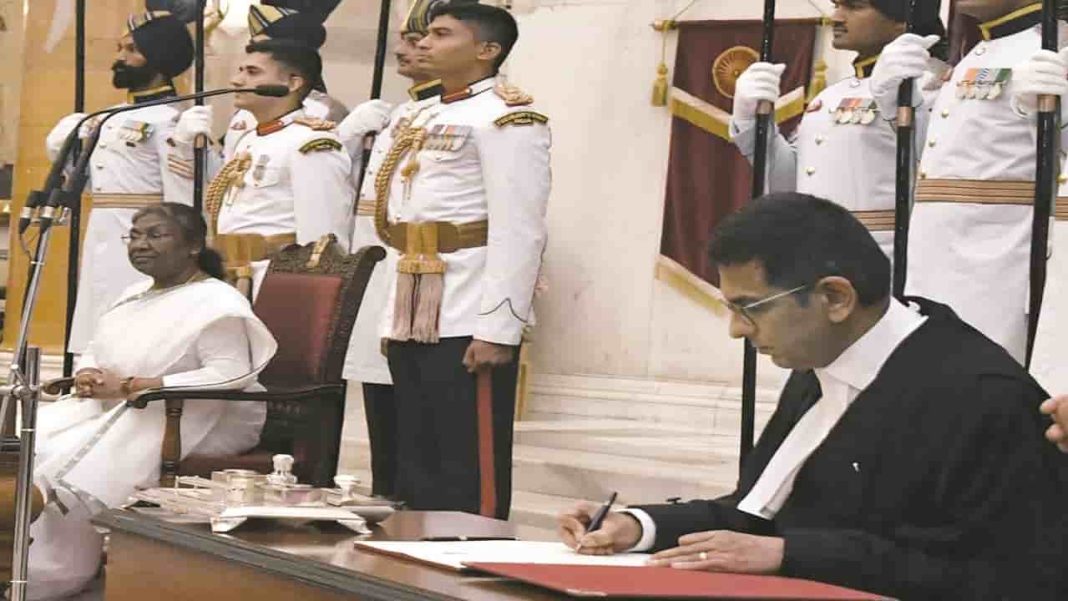 “Justice Chandrachud has been an upright person, an extraordinary academician and judge and we have a lot of expectations from him. He has to handle a lot of problems as CJI. He is working on many projects and with his conduct and competence, he is going to do a lot. Expectations are high from abroad also. Once he settles down in his new role, he will surely come out with laws which will be precedents not only in India but in other parts of the world.”

“Considering that Justice DY Chandrachud has delivered many landmark judgments and due to the comparatively long term he will have as CJI, the Bar and the Nation are looking forward to welcome changes in policies and programmes of the Supreme Court during his term.

Members of the Bar in small states will probably agree that the administration there with the number of judges as low as 2 or 3 at times may be of special concern. This is particularly with regard to the appointment and transfer of judges. The checks and balances inbuilt in the higher judiciary are mostly found lacking in small High Courts on account of the low number of judges. Special policies of the Supreme Court with regard to the administration of these small High Courts are required to ensure efficient dispensation of justice. This may possibly be adopted in the long term of Justice Chandrachud as CJI.”

“The judiciary is one of the important pillars of democracy. As the other institutions are failing in discharging their duties imposed  by the Constitution, pressure is mounted on the Judiciary.

Justice DY Chandrachud has at this crucial stage created hope that the  judiciary  will be  able  to  sustain and discharge its solemn duty in preserving the principles of democracy.

I have no doubt that he will be able to fulfill the  expectations of the  people  of this country with  his vast experience and exposure to the  latest technological developments.”

“We have a lot of expectations from CJI Chandrachud. Firstly, he has to ensure that judicial accountability has to be taken to a new level. There is a feeling that judges are above accountability. Secondly, subordinate judiciary is challenged with a weak infrastructure. The two-year tenure of the CJI must address this.

Corruption has seeped into some sections of the judiciary though the institution is credible. The few who are a cause for this must be weeded out ruthlessly.

Delays in the law and disposals must be addressed

Judicial temperament and decorum of the judges must be insisted on across the judiciary. This will ensure that advocates freely, boldly and persuasively get justice for their clients.”

“I congratulate the new chief justice on assuming office. Since he has a tenure of around two years, I am sure that he will get a lot of time to achieve his goals and solve problems.

Cases take a huge time to be disposed off due to not appointing  judges on time and vacancies are increasing. So I think Justice Chandrachud will work together with the government to do something to fills these vacancies fast which will increase the working efficiency of courts and help in faster disposal of cases. I also feel that he must work towards digitisation of courts. Improving the infrastructure of  courts is also necessary. Many courts are in a very bad condition and Chief Justice Chandrachud should focus on it.”

“I wish Justice Chandrachud all the best for his new pivotal position in the judiciary. I had the occasion to interact with him on a number of cases where he appeared as a junior. This was the time when he had just began his career. Since 1982, Goa had the bench of Bombay High Court and this is where Justice Chandrachud began his career as an advocate and practiced and later was designated as a senior advocate. This is a proud moment for all of us. We wish him success in his new assignment.”

“As Justice DY Chandrachurd will hold the office of CJI for an extended period of time, we hope that his work will be accomplished in a way that takes history into account.

His directions will help establish a new dimension in the Indian justice system. Moreover, I am hoping that he will provide his expertise on the judiciary system in Chhattisgarh in order to help the people of the state.

I extend my congratulations to the chief justice of India once more.”

“I heartily congratulate Justice DY Chandrachud. He is the hope of the citizens of India.

His tenure will be around two years, the longest of any CJI in this decade. We hope that he helps all Bar Associations because he was also a member of a bar association.

Secondly, he should look at the pendency of the cases and give a solution to it. I would request him to appoint more judges to reduce this pendency. He should also try to resolve the problems arising between the executive and the judiciary and make the relationship amicable.”

“The chairman and members of the Bar Council of Punjab and Haryana look forward to the tenure of CJI Justice DY Chandrachud.

The Indian judicial system is advancing at a very fast pace whereby the administration of justice is its heart and soul. The recent precedents and the futuristic vision of the apex court as well as the Indian judiciary would provide solid foundation for democracy. The Bar Council hopes that CJI Chandrachud will be able to bridge the gap between the Bar and the Bench which he has been entrusted as a function to be done under The Advocates Act, 1960.”

Chairman and members of the Bar Council of Punjab and Haryana

“On behalf of the Bar Association of Dehradun and the legalistic society, I congratulate CJI DY Chandrachud. We have a lot of expectations from him. We have been inspired by his work ethics.

I believe the relationship between the Bar and Bench will improve.

We want monitoring of High Courts and lower courts, especially district courts, so that their functioning is organised and the problems of advocates solved. I wish and expect that our chief justice will take this up in right earnest so that relationship between the Bar and the Bench improves and mutual understanding persists.”

“Justice Chandrachud is a very knowledgeable man and I congratulate him on becoming the new chief justice. When Allahabad High Court was celebrating its 50th anniversary, I was a member of the Bar Association. I have seen him working both on the judicial as well as administrative side. He is an intelligent and judicially sound man. Even from an administrative angle, we have got an extremely strong administrator. I have closely witnessed him resolving several malpractices in the Allahabad High Court and making various improvements. On the basis of this personal experience, I am vouching that we are going to get a great CJI who is going to judicially and administratively improve the system. I hope that through this appointment, the judiciary becomes stronger and judicial administration is strengthened.”

“I and 12,000 Bar members of the Awadh Bar Association congratulate Justice DY Chandrachud. He was the chief justice of Allahabad High Court for more than two years. So he is connected to Awadh lawyers and they love him.

The online system in courts was initiated by Justice Chandrachud. Now he has to strengthen it. To given strength to the values in the Preamble of the Constitution and to make it strong and transparent is the biggest need and demand of the country. Unless democracy is strong, constitutional institutions will not become strong such as the Election Commission. Until these institutions become strong and transparent, development and justice will not be possible.”

“I would like to congratulate Justice DY Chandrachud. I firmly believe that he will usher in positive changes in our courts. Justice  Chandrachud recently set an example by ordering the demolition of Ghaziabad’s  twin towers. He is an intelligent person who has a deep knowledge of law.

The nation has got a very good chief justice. He is an esteemed jurist  who will take the country in the right direction. I request him to take up the problems of advocates of Varanasi.”

“Firstly, I want to congratulate Justice DY Chandrachud. The legal fraternity has many hopes from him. I want to bring out the DLSA job issue in which nominees are appointed on the basis of bias. An eye should be kept on this issue. Secondly, law and justice will be looked after in a firm manner. We hope he does his best for the Bar.

Every Bar association of Delhi and district courts have hopes from the CJI on the issue that NLSA and DLSA are giving appointments nowadays to paid lawyers because of which private lawyers will suffer in this profession. We want him to correct matters here.”

“Justice Chandrachud is an alumnus of the esteemed Campus Law Centre, Delhi University, from where I also graduated in law. He has been impressing the legal fraternity with his exceptional jurisprudential acumen. He has already delivered path-breaking progressive judgments and championed issues relating to social causes, privacy, and free speech and has created rights where none existed. The court and advocates are two wheels of the chariot of justice and we expect the new CJI to be empathetic towards the lawyer fraternity and ensure the welfare and betterment of legal practitioners and their families. Small steps such as ensuring timely disbursal of financial aid to advocates during distress and speedy insurance guarantees will help in improving the deplorable condition of lawyers and their families. Welfare of lawyers has a far-reaching effect on the functioning of the entre judicial system and we hope that the new CJI will take proactive steps to ensure the same.

A known workaholic, Justice Chandrachud played a pivotal role in starting virtual hearings during the pandemic and has been instrumental in encouraging and making live-stream court proceedings a reality. We look forward to more dimensions employing technology and paving way for a citizen-centric and lawyer-friendly justice dispensation system. Justice Chandrachud admires the power of the law to effect change and his stewardship would strengthen the judicial infrastructure and allow the rule of law to reach the poorest sections of society.

I wish him all the success in his tenure.”

Since I belong to Jharkhand, I would like to raise the following issues regarding the judiciary here. There is the issue of the infrastructure of the judiciary in Jharkhand, which is very poor, be it civil courts, criminal courts or the Bar. Despite crores of funding coming from the state and the centre, the infrastructure is poor, and no one has taken the initiative to improve it. We hope he will take the initiative to improve matters here.

Also, I would like to put emphasis on making the collegium system more effective by allowing meritorious lawyers and civil court judges to be promoted as the judges of the High Court. The criteria of integrity and merit should be emphasised over seniority. I hope that after taking charge as the new CJI, the legal system will improve.”