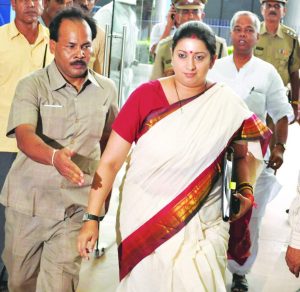 The widespread outrage over the Smriti Irani-inspired proposal to punish mediapersons publishing “fake news”, albeit short-lived, was largely because the bodies that would impose the penalties—the Press Council of India (PCI) and the National Broadcasting Authority (NBA) have lost credibility in recent times. The PCI chairman, retired Justice CK Prasad, who said he backed Irani’s move and helped draft the proposal, had been criticised by the Editors’ Guild for rejecting all six of its nominees and reconstituting it recently, with many who are seen as pro-BJP.

One of them is BJP MP Prathap Simha, who, ironically, was the first to attack the Karnataka government for arresting Mahesh Vikram Hegde, founder-editor of fake news website Post Card News. (Hegde’s Twitter account, replete with anti-Muslim fake news, is followed by PM Modi).

The NBA is headed by Rajat Sharma who is known to be extremely close to Modi, Amit Shah and Arun Jaitley. The PCI has 28 members of whom five are MPs, three from the Lok Sabha and two from the Rajya Sabha, selected by the respective Speakers. Sumitra Mahajan nominated Meenakshi Lekhi and Simha. Another objection to Irani’s sneak attack was that anyone charged with publishing fake news would automatically lose accreditation privileges, which allows access to the parliament and key government buildings, and getting them back would be an arduous process. As of now, 2,404 journalists are accredited with the government of India. 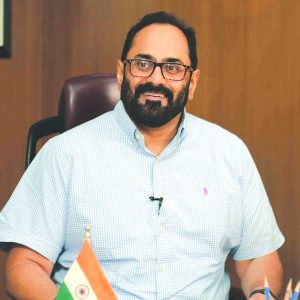 Is this another example of fake news? Rajeev Chandrasekhar, founder of Asianet News, which launched Republic TV and re-launched Arnab Goswami, has announced that he is stepping down as a director to “ensure the neutrality” of Republic TV since he has formally joined the BJP. Republic TV is anything but neutral and Chandrasekhar’s move, according to media sources in Bengaluru, is a fig leaf, meant to give him credibility in corporate circles, wary of his connection to Goswami’s Fox News (ultra-nationalist and rightwing) imitation. In a letter, Chandrasekhar says, “…from 2006 I have been in public life as an Independent MP….Since I am now a member of the BJP, I believe it is in the  interest of Republic TV’s brand and team that I no longer serve on the board.” Social media was not convinced and plenty of Twitter chatter was about “power without accountability”. He is still the majority investor in Republic TV. Sources say his move is meant to get him onto parliamentary committees to do with information and broadcasting—which he managed earlier as an “independent” MP. 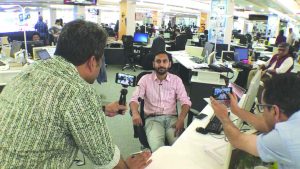 One has heard of phone-in news—reports that journalists in the field send to headquarters over phone lines, and now mobiles. Due to massive staff cuts by television broadcasters and advances in technology, there is a dramatic change in broadcast journalism. Journalists are being sent out on their own, sans camera crew, to shoot videos on their smartphones—hence they are called MOJOs, Mobile Journalists. Broadcasters like NDTV have taken a huge pioneering step by tying up with Samsung to provide their reporters with high-end Samsung Galaxy S8s which come with 4k resolution—almost as good as the traditional TV camera. The mobiles come with stands and selfie-stick-like extensions, to allow for hands-free use.

It’s bad news season for journalists, especially those in print publications. In March, everyone looks forward to the annual increments. This year, there are plenty of long faces in newsrooms with even senior journalists being told that increments will be a bare minimum, and not for all. The Times of India, which has been quite generous come March, has this time gone in for restricted increments, and only a few will get hikes. Much of this is to do with general belt-tightening in the media industry over the last two years with falling ad rates, exacerbated by a sharp rise in paper costs. Global newsprint prices have gone up by more than $200 per tonne after China began to import newsprint since it stopped producing its own, citing environment concerns. No wonder the bar at the Press Club wears a deserted look.