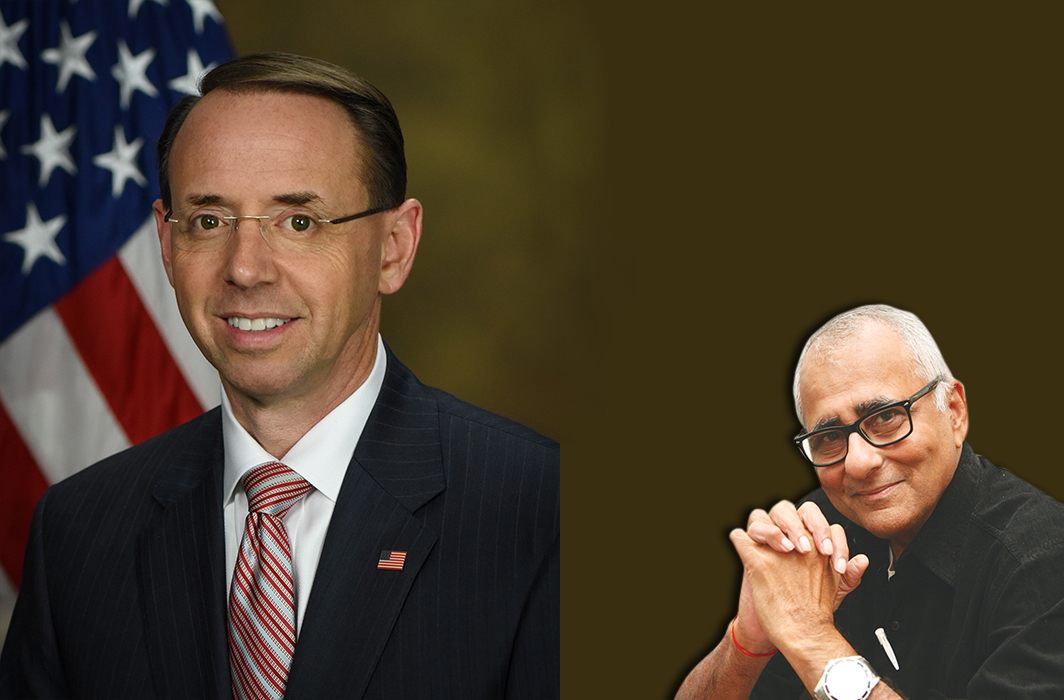 “Let reverence for the laws be breathed by every American mother … let it be taught in schools, in seminaries, and in colleges; let it be written in Primers, spelling books, and in Almanacs—let it be preached from the pulpit, proclaimed in legislative halls, and enforced in courts of justice. Let it become the political religion of the nation; and let the old and the young, the rich and the poor, the grave and the gay of all sexes and tongues, and colors and conditions keep the rule of law.”

This quote from Abraham Lincoln was how the current deputy attorney general of the United States, Rod Rosenstein, ended a recent speech at the Bar Association of Montgomery County’s Law Day Celebration in Maryland.

Rosenstein is probably the most talked about public official in the Donald Trump administration. He has become the lightning rod for the fury of the White House and its Republican supporters in Congress for refusing to play footsie with them in the ongoing Justice Department investigation headed by special counsel Robert Mueller into the Trump administration’s subterranean interactions with the Russians, designed to influence the outcome of the presidential election.

The ongoing probe is a textbook case for all constitutional democracies—especially India—on the role and conduct of prosecutors in the disinterested pursuit of fraud, waste and corruption. It is an abject lesson on the practical operation of the separation of powers without which the rule of law is emptied of all meaning.

One of the biggest problems in functioning democracies is that they often become dysfunctional when faced with investigating allegations of criminality, and actual or perceived conflicts of interest against high-ranking Executive officials. This is a glaring flaw in the Indian system of government which is committed in constitutional principle to upholding the separation of powers between the branches of government but fails to make that cut in the real world.

Exactly a year ago, I wrote that this principle is the very foundation of the accountability of rulers to those whom they govern. Under the Indian system, the Legislature—whose prime function is to ensure that the Executive branch carries out the mandate of the public with diligence and integrity—is in effect a slavish extension of the Executive. A minister is also a Member of Parliament or a legislative assembly. This is a built-in conflict of interest because, as a legislator, the minister can hardly be expected to be an impartial judge of his own actions.

It is small wonder then, that despite the CBI, the Central Vigilance Commission and the CAG, fraud, waste and corruption, even when detected, go uninvestigated, unpunished, or covered up by the very agencies appointed to probe them. At the central level, the CBI, reporting directly to the prime minister, while an effective tool against his political enemies, can hardly be expected to launch a prosecutorial inquiry against the chief executive and would also need prior permission from the government before opening cases against high-ranking officials and ministers. A newly elected chief minister of a state can simply shut down an ongoing criminal investigation against him launched by a previous administration. Joint parliamentary committees have been notoriously partisan in their approach to inquiring into wrongdoing by their own parties.

And here’s where America makes the cut. Mueller reports to Rosenstein who reports to the president through Attorney General Jeff Sessions, a presidential appointee whom Trump can fire at will. But Sessions has recused himself from all aspects of the Russia investigation because, before becoming attorney general, he had participated in an undisclosed meeting with a top Russian official.

So, Rosenstein has the ball squarely in his court. But he won’t play ball with the president who is putting constant pressure on him through his aides as well as members of Congress and even hinting at firing him as he did former FBI director James Comey. But there’s a Catch-22 here, thanks to the American system of accountability. Legally, Trump could get rid of Rosenstein. But the constitutional consequences would be disastrous. After all, the special counsel was appointed under public and Congressional pressure precisely because Trump fired FBI chief Comey who was inching closer to the White House in the agency’s investigation of Russia’s meddling in America’s election.

The Comey ouster was tantamount to obstruction of justice—an offence the American legal system does not forgive. Richard Nixon was forced out of the presidency for obstructing justice in the 1970s after he fired the special prosecutor investigating Watergate. That firing served to accelerate and widen the probe. Trump’s getting rid of Rosenstein and then getting his successor to oust Mueller would lead to catastrophic charges of obstruction of justice.

And why do Trump and his supporters want so badly to get rid of Rosenstein? Because he is refusing to turn over documents that the FBI and Justice Department investigators gathered in the course of their inquiry to members of Congressional committees who blindly back Trump. Already, former Trump aides have been indicted, and the premises of his campaign manager and personal attorney have been raided, with evidence emerging of payoffs from Trump through slush funds maintained by his own lawyer.

Rosenstein has been under several threats, but he has struck a “note of defiant independence”, one report said. Publicly, he has stated that “the department of justice is not going to be extorted”. His public remarks at the recent bar association gathering are a stirring reminder that men and women of courage are still around to defy power structures. The theme of his speech, ironically, was “Separation of Powers”. I will quote liberally from that speech which was circulated by the bar.

One of the biggest problems in functioning democracies is that they often become dysfunctional when faced with probing allegations of criminality, and actual or perceived conflicts of interest against high-ranking Executive officials. This is a glaring flaw in the Indian system of government.

Faithfully enforcing the law is not about following a simple set of instructions, he said. As the great champion of the law, Robert H Jackson, who was attorney general in 1940, put it, “law enforcement is not automatic”.  Enforcing the law requires discretion and judgment.

Rosenstein recalled that when you enter the courtyard of the Main Justice building, you pass beneath a depiction of the scales of justice and an inscription that reads “Privilegium Obligatio”. It means that when you accept a privilege, you incur an obligation. He said that French Enlightenment philosopher Voltaire put it more concisely: “With great power comes great responsibility.”

Touching obliquely on the recent pressures on him to turn over to legislators documents gathered during the Russian investigation, Rosenstein said it is “a bedrock principle, with very few exceptions, that we do not discuss investigations. The Department’s longstanding practice of keeping information about our investigations confidential has often been the source of disagreement with Congress”.

He cited the 1941 example of Congressman Carl Vinson writing to Attorney General Robert Jackson requesting FBI and Justice Department reports made in connection with an investigation of labour disputes involving Navy contracts. Vinson’s committee had oversight for such issues, which is why he wanted the documents. Attorney General Jackson flatly refused the request.  He did not compromise.

Jackson explained that declining to open the FBI’s files to review by Congressional members and staff is an “unpleasant duty”, but it is in keeping with the separation of powers embodied in the constitutional system. To illustrate his point, Jackson quoted a Supreme Court opinion explaining that it is essential to the successful working of this system that the persons entrusted with power in any one of these branches shall not be permitted to encroach upon the powers confided to others, but that each shall by the law of its creation be limited to the exercise of the powers appropriate to its own department.

According to Rosenstein: “Our constitutional structure, and the separation of powers embodied in that structure, represents our government’s defining feature. Justice Scalia explained that those other humdrum provisions—the structural, mechanistic portions of the Constitution that pit, in James Madison’s words, ambition against ambition, and make it impossible for any element of government to obtain unchecked power—that convert the Bill of Rights from a paper assurance to a living guarantee.”

The push and pull among and between the branches is bipartisan. It exists regardless of which party is in power. Justice Scalia explained that Americans should “learn to love the separation of powers”, even though it frequently leads to controversy. That tension—the power of each branch to say no—is one of the things that protects liberty.

On the wall behind the chair on which Rosenstein sits in his Justice Department office in Washington, D.C., is a huge portrait of his hero, Robert Jackson. It would be apt, and appropriate to the spirit of this essay—especially when the Indian judicial and prosecutorial system is sorely in need of more advice and inspiration as it goes through a period of trial and tribulation—to quote from The Federal Prosecutor, an address by Jackson delivered at the Second Annual Conference of United States Attorneys, Great Hall, Department of Justice Building, Washington, D.C., on April 1, 1940, 10 am.

Rod Rosenstein is probably the most talked about public official in the Donald Trump administration. He has become the lightning rod for the fury of the White House and its Republican supporters for refusing to support them in the Justice Department probe.