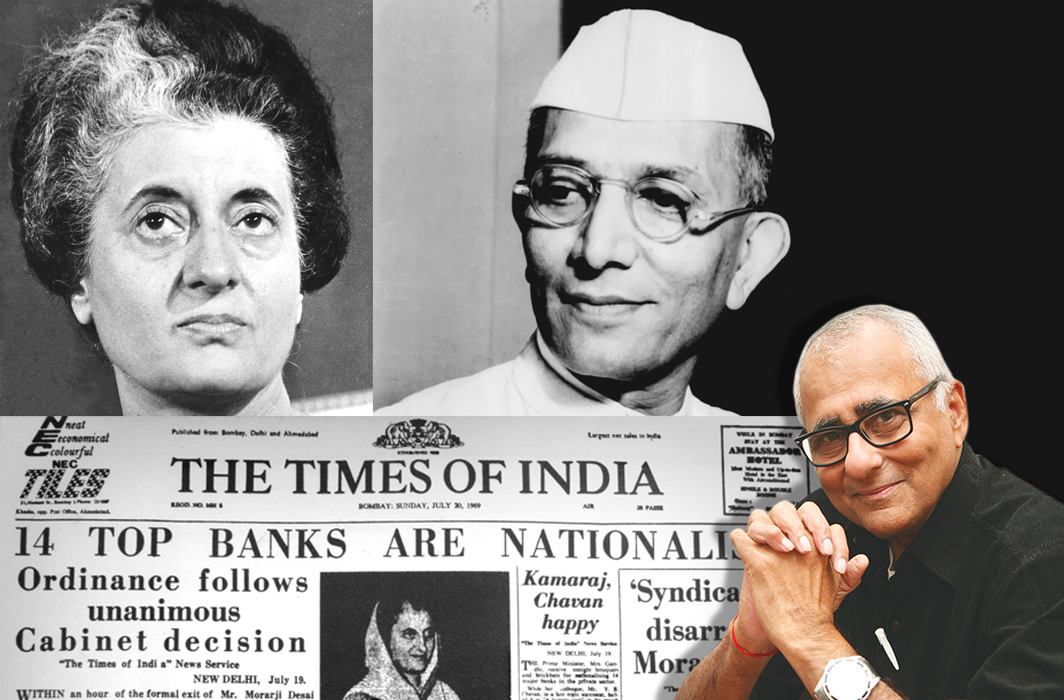 I caught up recently with S Narendra who, during an illustrious career spanning several decades as a veteran senior bureaucrat, served as press adviser to several prime ministers and was India’s Principal Information Officer. He also served as Information Officer in the Ministry of Finance under Indira Gandhi. He brought to my notice a recent article he had penned and wondered why the subject he had chosen had not received the media attention it deserved.

The subject was the 50th anniversary this July of bank nationalisation in India. He agreed that India Legal could use it as a Q&A in the format of an interview, the excerpts from which are produced below:

Why do you believe any importance should be given to this subject in today’s economic situation?

Because it is a positive legacy. When internationally well-known bank brands were coming crashing down under the weight of their own greed ten years back, (2007-08), and in turn seeking bailouts from their governments, Indian and foreign commentators had noted that Indian banks did not catch the global infection because of their government ownership. In fact, India should have thanked the much vilified Indira Gandhi for nationalising private banks that prevented the Indian financial system from going bust along with the global meltdown. The nationalisation of commercial banks 50 years back came as a popular political drama serving good economics as well.

What was the atmosphere then, internationally and within the government?

On the day man first landed on the moon, the Indian government walked the first step on its road to climbing the “commanding heights of the economy” with bank nationalisation. This distant July month was packed with intrigue and struggle for power within the Congress party and economics became the handmaiden of power and influence.

You were witness to dramatic power shifts at that time. What were some major elements?

Very swift political currents began to reshape the Indian polity after Prime Minister Lal Bahadur Shastri’s death in early 1966. Power brokers in the party installed Indira Gandhi as his successor by defeating Morarji Desai in the prime ministerial poll. In the first general election held in the post-Nehru era in 1967, the Congress party had lost power in many states and the opposition ranks in Parliament had swelled, especially that of the Swatantra Party representing ex-royalty and business and the Jana Sangh. The Congress was seemingly losing its traditional social and regional base and also the support of business and industry. In the new Congress government, Morarji Desai was made the deputy prime minister as well as the finance minister.

Weren’t there major differences between Indira and Morarji Desai?

While Indira opposed his proposal to bring farm income under income tax, Morarji Desai stalled her suggestion for bank nationalisation, with his “social control”—a system of token oversight over banks. The Bangalore All India Congress Committee (AICC) session in the summer of 1969 at the glass-house in Lalbag, became a watershed. The party president, Nijalingappa, associated with the party old guard, in his opening address to the session, had given a call for pro-market policies. Indira countered with her “stray thoughts”, outlining a more pro-people line hinting at greater government control over the economy. When the post of president of India fell vacant in May, after the death of Dr Zakir Hussain, the rift within the party became an unbridgeable divide. Indira and her supporters decided to oppose the nominee of the party old guard (dubbed “syndicate”) for rashtrapati.

What are some of your personal memories of the events that followed?

On July 14, the Prime Minister’s Office notified news agencies that Morarji Desai had been stripped of his finance portfolio. I was then his Information Officer, and went into his office. On being shown this news flash, Desai sent in his resignation letter, asked for his personal car and left for his residence. From that moment up to July 19, I was at his residence from morning till late into the night. On July 19, in the afternoon, the prime minister accepted Desai’s resignation from the cabinet. Around 6 pm, Economic Affairs Secretary Dr IG Patel gave me a copy of the ordinance nationalising 14 private banks, but forbade me from leaving the finance ministry until 8.45 pm when Indira was expected to announce the bank nationalisation over AIR.

Did you not find that unusual?

It was her masterstroke to go to the people for support over the heads of party power brokers who wanted her to be their “gungi gudiya” or dumb puppet.

Was this pure power play and gimmickry? Were there any justifiable, solid grounds for this sweeping step?

Actually, until this nationalisation, a few business houses in order to maintain their dominant position, managed a cosy arrangement with commercial banks and general insurance, since they were also their owners. An RBI report on rural credit had bared the stark reality of rural poverty and the total neglect of agriculture and the rural sector by private banks. Desai’s “social control” seems to have not done anything to correct this situation. Successive governments that claim to have enhanced the flow of credit to farmers rarely thank Indira for giving them this powerful political tool.

Where was the empirical data to support these assertions?

Interestingly, the officials chosen to work on nationalisation could not even lay their hands on any reliable official records for determining the size of banks to be nationalised. They reportedly took the cue from a newspaper (The Economic Times) and a research article that divided banks with Rs 50 crore deposits and below.

Some top officials in the finance ministry changed and a new banking department was added to it for exercising broad policy oversight over banks. The finance and other economic ministries under strict prime ministerial supervision came with a series of policies whose traces are present in most sectors of the Indian economy even today. Many such policies for the broadening of industrial base, entrepreneurship, advances in agriculture and allied occupations, and measures to change the face of rural India perhaps would not have been possible without this single act of bank nationalisation 50 years back.

Would you venture to say that the Modi government has benefited from Indira’s initiative?

Banking in unbanked areas as well as the opening of crores of zero balance accounts has become possible because of this single move. Bank depositors in India have overwhelmingly voted for the safety offered by public sector banks, even while forgoing some of the blandishments offered by their private competitors.

But does not this give the government undue influence over the banking sector?

Whenever the subject of expansion of access to banking, particularly in favour of underserved areas, crops up, arguments are advanced for opening up of the sector to private and international banks. It is rarely noticed that even the nationalised banks needed to be cajoled and incentivised to move into difficult geographies and sectors. The banks had to be driven to unfamiliar rural and other sectors with a definite policy of priority lending. For the first time, the banks were asked to lead economic development with the district as the focus. Each bank adopted a district and prepared detailed surveys of their economic potentials and steps needed to tap it.

But the prevailing popular wisdom seems to regard Indira’s initiative as a retrograde measure that set back economic growth to benefit her personal political ambition.

While there is a wealth of research damning the effects of bank nationalisation, partly biased, undertaken when rainbow economic conditions prevailed, contrary non-partisan research is sparse. The all-pervading economic gloom of the present perhaps is an opportunity for a proper appraisal of the politics of the ideological debate over bank nationalisation and the road ahead.

What should be the actual focus of this debate at a time when public trust in the banking system is at an ebb?

This needs to be separated from the other debate over the merits or otherwise of the government dominating the “commanding heights of the eco­nomy”. Or for that matter, on the issues of moral hazards of loan waivers, mounting bank NPAs and their writedowns and crony capitalism assisted by pliable government banks. There is a section of opinion that has been attacking the government ownership of banks on the ground that banks lend under political pressure and acquire toxic debts. Such critics should remember that in the western countries, including the US, privately-owned banks brought down the global financial system itself by their unregulated greed and mismanagement. Sadly, even when high-level probes in those countries named individuals for wrongdoing, the relevant government departments did not pursue prosecution of such individuals. While billions of dollars of public money were lost due to misconduct on the part of bank management, they were let off with fines of a few million dollars.

Then how do you ensure proper accountability and systemic checks and balances?

It is not ownership that matters for the growth and development of healthy financial institutions, of which banks are a vital part. What is required is independent, specialised and prudent regulatory vigilance of the financial system that is not influenced by political exigencies. In the normal course, the golden anniversary of bank nationalisation should have been a fitting occasion for recording their saga—their immense contribution to the building of modern India during the past five decades. This would be very interesting economic history. Unfortunately, their NPA story, authored by Indian politics, is eclipsing their positive legacy.