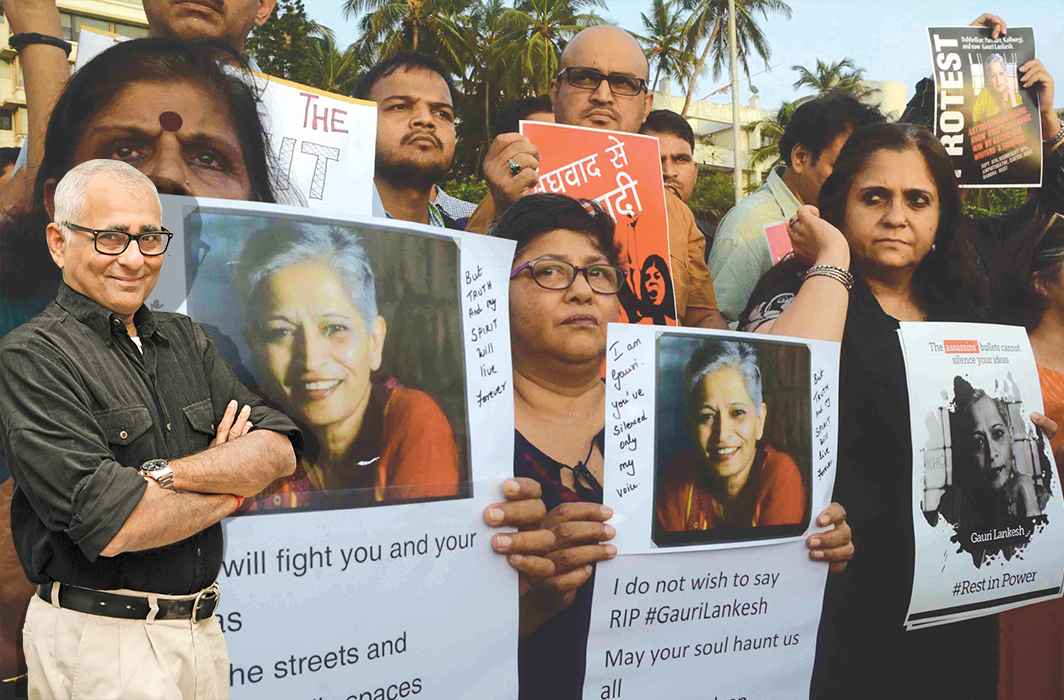 Despite the cliché that “one man’s terrorist is another person’s freedom fighter”, there do exist in common sense, in law, in international conventions, fairly well-defined definitions of terrorism. And in all nations which accept these classifications, terror and its perpetrators are treated differently from what is prescribed in various penal codes of investigation and punishment. More than 140 countries have passed counter-terrorism laws since the attacks of September 11, 2001.

And by any categorisation of this crime, there is little doubt in my mind that the brutal execution-style slaying of Left-leaning journalist Gauri Lankesh, a bristling thorn in the sides of fanatics and bigots, was one more example of terror which has plagued India for decades. It calls not for routine police or crime branch investigations but for the sternest action under terror laws under which Kashmiri terrorists and armed assassins in the North-East are brought to book in the pursuit of larger peace in the land.

If we can easily accept that the killing of Lala Jagat Narain on September 9, 1981, founder of the Hind Samachar group, for his powerful stand against Khalistani fanatics, was an act of terror, there is no reason for applying any other standard to the cold-blooded murder of Lankesh. I do not subscribe to any broad definition of “Hindu terror” or “Muslim terror”. There are some Hindus who commit heinous acts of violence to achieve what they consider to be their own agendas of religious identity politics. And today, more Muslims—in Pakistan, in Afghanistan, in Turkey, in Syria, in Iraq, in Yemen —are being killed and tortured by their brethren in the name of the Holy Book— than by their common enemy, Israel.

In Kashmir, during the Pakistani invasion in 1947, thousands of local Muslims were butchered, their women raped, their houses burned by hoards of invading terrorists. Later, in the 1990s, local Kashmiris who happened to be Muslims terrorised Sikhs, Pandits, and murdered their own leaders like Qazi Nisar, Abdul Ghani Lone, Mir Mustafa, among others.

I could go on. What emerges from these examples is that terror is often blind to religion or casts religion in a mould convenient to a special agenda. It is nourished by prejudice and the kind of hatred that militates against rational behaviour and saner counsel and all the contours of ethics and morality. In order to confront it, we must call a spade a spade, as did the mayor of Charlottesville in the US, Mike Signer, who openly called the fatal car crash—as did most American newspapers—a “terrorist attack with a car used as a weapon”. Its driver, James Fields, Jr, drove his vehicle into a crowd of peaceful demonstrators who were protesting against white supremacists and Nazis last month. He killed a woman, 32-year-old Heather Heyer, and was charged with second-degree murder. But the mayor, supported by most of the media, wants him tried as a terrorist.

Similarly, London Mayor Sadiq Khan recently condemned an apparent anti-Muslim car-ramming incident outside a mosque in north London as a “horrific terrorist attack”. Sherrilyn Ifill, an American lawyer, professor and president and director-counsel of the NAACP Legal Defense Fund, believes that racist hate crimes such as the murder of Timothy Caughman by a self-confessed hater of non-whites was an act of domestic terrorism. She wrote recently:

“Crimes like these certainly seem to be acts of terrorism, but our federal terrorism law doesn’t account for prosecution of true homegrown terrorism, that which comes from Americans, against Americans, and without foreign influence. (The killer) James Jackson has been charged with second-degree murder in New York and faces decades in prison. The District Attorney’s Office has indicated it is considering classifying Jackson’s alleged acts as terrorism under state law, which would make him eligible to be charged with first-degree murder, carrying the possibility of life in prison.”

She continues: “Understanding the ideological forces that promote violent extremism is essential to developing strategies to prevent future killers from carrying out their plans. In addition, properly designating white supremacist acts of terror could provide the proper law enforcement lens from which to investigate these cases.

“Most of all, designating these crimes as terrorism sends a message to vulnerable communities that their fears are understood, and that violent white supremacy is recognized as a threat to American security as well as to individual victims.

“Lynching—the indiscriminate killing of (mostly) black people in the American South during the late 19th and 20th centuries by hanging, burning, dragging, drowning and shooting—unleashed a wave of terror in African-American communities. The randomness and brutality of the violence was central to the way in which it spread terror.”

India is passing through a period of what is now widely described as “beef terror” in which people are lynched on the mere suspicion of transporting bovines or storing meat. The government’s response has been tepid. As Professor Ifill observes, the government is sending no real message of deterrence. Writer Swaminathan Aiyar summed this up succinctly: “The lynch mobs that beat up and kill people suspected of carrying beef are terrorists. So too are Muslim lynch mobs killing policemen in Kashmir. All these lynch mobs are unlawful, use violence against civilians, and have religio-political goals. They fit the definition of ‘terrorist’ like a glove. And violence begets violence in which no resident is safe in his own neighbourhood. It’s a terrifying spiral.”

A document prepared by the Centre for Legal Policy contains a concise history of the applicability of anti-terrorism laws in India. Excerpts: “Considering the nature and gravity of terrorism, the Centre and States have enacted other specific legislations to deal with terrorism and related activities. In 1985, Parliament enacted the TADA as a specific anti-terror legislation, in the backdrop of the 1984 Indira Gandhi assassination. The law remained in force till 1995, after which it lapsed, following widespread allegations of misuse. In the aftermath of the 2001 Parliament attack, the Prevention of Terrorism Act (‘POTA’), 2002 was enacted. POTA also faced severe criticism for allowing widespread human rights abuses in the country. It contained a broad definition of a ‘terrorist act’ that covered political dissents, allowed prolonged pre-trial detentions. The law was thus repealed in 2004.

If we accept that the killing of Lala Jagat Narain in 1981, founder of the Hind Samachar group, for his stand against Khalistani fanatics, was an act of terror, there is no reason for applying any other standard to the cold-blooded murder of Lankesh

“Currently, the UAPA (Unlawful Activities [Prevention] Act) is the primary anti-terrorism law in force in India. This law was enacted by Parliament in 1967 to enable the imposition of reasonable restrictions on the rights to freedom of speech and expression, peaceful assembly, and formation of associations or unions in the interest of sovereignty and integrity of India.  The original Act was targeted at unlawful activities of a general nature, and stringent provisions on terrorism were added only later through various amendments starting in 2004, following POTA’s repeal. It was subsequently amended in 2008 in response to the Mumbai terrorist attacks. The amended UAPA incorporated the definition of a ‘terrorist act’ under section 15 and created new terrorist offences. It also increased the period of detention without bail.”

I do not use the word “terrorism” loosely. The accepted dictionary definition of it is “the unlawful use of violence and intimidation, especially against civilians, in the pursuit of political aims”. India’s own law-makers spelled it out when they first drafted the Prevention of Terrorist Activities Act in 2002, drawing heavily from the language of the Terrorist and Disruptive Activities Act of 1987. Section 3 calls terrorism the “intent to threaten the unity, integrity, security or sovereignty of India or to strike terror in the people or any section of the people does any act or thing by using bombs, dynamite or other explosive substances or inflammable substances or firearms or other lethal weapons or poisons or noxious gases or other chemicals or by any other substances (whether biological or otherwise) of a hazardous nature or by any other means whatsoever, in such a manner as to cause, or likely to cause, death of, or injuries to any person or persons or loss of, or damage to, or destruction of, property or disruption of any supplies or services essential to the life”.

I am using the government’s own language to characterise the killing of Lankesh.

In 1985, Punjab terrorists adopted a new strategy to intimidate the media which stood in the way of their political agenda. India Today described that strategy in the opening para of a story it wrote at the time: “Since the followers of Sikh zealot Jarnail Singh Bhindranwale began rewriting the history of Punjab with bullets and blood, the Hind Samachar group (combined circulation: 6.94 lakh) has lost its founder Lala Jagat Narain, his son Romesh Chander and seven members of its editorial staff. But it received the biggest blow last month when seven of its newsagents and hawkers were gunned down by the terrorists.”

There can be zero tolerance for any group or person trying to rewrite the history of India with bullets and blood. In fact, the government gave massive armed police protection to the journalists and distributors and hawkers of Hind Samachar in the 1980s to ensure that its voice would not be silenced by violence. The least the government can do now in the wake of the terrorist assassination of Lankesh is to go after the assassins with the anti-terror mechanism under its command.