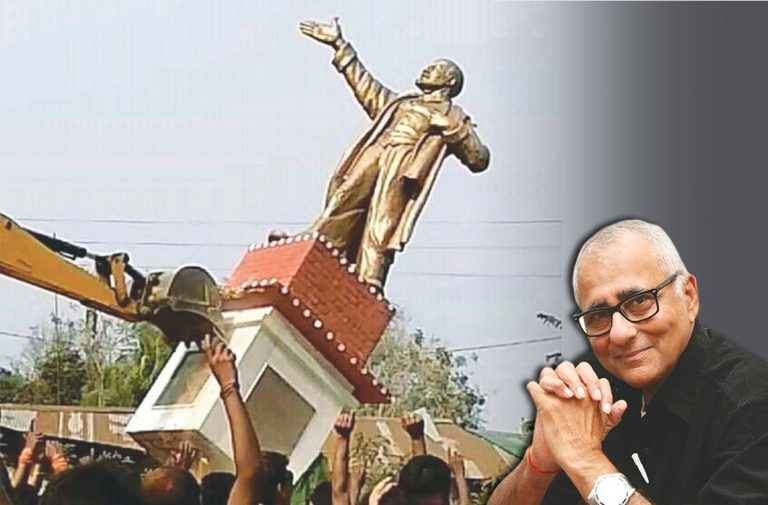 It is ironical indeed that Vladimir Ilyich Lenin, the founder of the Bolshevik-ruled state of the erstwhile Soviet Union, should meet his latest iconoclastic demise in so remote a place as India’s hilly North-east Tripura, a name the Communist giant may not have even heard of when he penned essays praising the Indian independence movement against the British imperialist “jackals” after they jailed Lokmanya Tilak in 1908 for “sedition”. Perhaps the pro-BJP wrecking crew which destroyed the Lenin statue last week in a macho display of triumphalism did not even know how to spell L-E-N-I-N, or where he had ruled. But their mindset bespeaks the escalating polarization which is cutting a swath of political hatred across the land. A veritable demolition derby followed, in which statues of Dravidian hero and rationalist Periyar, Dalit champion and perhaps India’s greatest constitutional scholar Ambedkar, and Jan Sangh founder Syama Prasad Mookerjee were defaced.

At a personal level, I am no fan of statues, unless created as an artistic adornment to give a happy feeling to some particularly drab corner of my study. And (also personally), I oppose the creation or perpetuation of personality cults. After all, no matter how great our political and spiritual heroes may have been in real life, as statues, like Shelley’s Ozymandias, they all have feet of clay. I prefer the intimacy of family albums or even my icloud drive.

I have no idea how great a man Lenin was, whether he was an enormous liberator of the oppressed, starving masses from the clutches of Czar Nicholas and gave his people the promised “peace, bread, and land”, or a demagogic megalomaniac obsessed with a messianic zeal with which he forcibly collectivized agriculture and created a brutal one-party state in which his Cheka secret police executed or exiled millions of dissenters. I suppose those who have faith in the first description and built his statue must have been convinced that he helped bring in socio-economic equality to Tripura, while those who tore him down believed his statue was a symbol of their unemployment or wretchedness.

Erecting one doesn’t bring relief and freedom, just as placing a moorti inside a temple does not bring instant salvation. Demolishing it does not accomplish much except removing something which, to many, may have become an eyesore. But you can accomplish the same by simply refusing to look at it.

The act of demolition does, perhaps, provide a more emotive kick and sense of empowerment. The collective fury this releases also let loose energies of divisive hatred which, if left uncontrolled, or exploited for political one-upmanship can lead to civil unrest for which democratic societies have to pay a heavy price.

One of the best-known toppling in modern times was that of a bronze Saddam Hussein in Baghdad during the American invasion of Iraq in 2003. Was this a spontaneous outburst of Iraqi jubilation? Peter Maass, a journalist for The New York Times Magazine, was an eyewitness. He wrote in a 2011

ProPublica piece that US Marines who were present “helped drag the statue down, in part, because they understood the mass appeal of such an image. He did not personally see it as a defining moment, and he added that the square was less crowded, and the Iraqis present less enthusiastic, than it had appeared in many photographs and live broadcasts”.

Tripura’s Lenin is not the first to bite the dust. The Ukranian Week calculated that 376 Lenin monuments were removed and/or destroyed in February 2014. Says an official account in Wikipedia: “The demolition of monuments to Vladimir Lenin in modern Ukraine started during the fall of the Soviet Union. During Euromaidan, it has become a widespread phenomenon and dubbed by Ukrainians Leninopad, a pun literally translated as Leninfall.”

On 15 May 2015, President of Ukraine Petro Poroshenko signed a bill into law that started a six-month period for the removal of Communist monuments (excluding World War II monuments) and the mandatory renaming of settlements with names related to Communism. A website Raining Lenins tracks the statistics of the fall of Lenin statues in Ukraine. Several other Lenin statues were removed in countries, including Romania, Uzbekistan and Ethiopia, around the time of the implosion of the Soviet bloc.

Lest you should think that I am an incorrigible Leninophobe, let me quickly run you through a quick list of some the institutions and icons which have suffered similar fates. So you think Chairman Mao is sacrosanct in China? Perhaps Xi is more so today, while he still lives than the Great Helmsman of independent China. Recently, a massive golden 36-metre statue of Mao—known as “Mega-Mao”—was pulled down in Henan, China, following its erection at a cost of about 3 million yuan. According to a report in The Guardian, the statue was the subject of scorn and ridicule in the social media. Later, photographs in circulation showed “the Great Helmsman’s hands, legs and feet appeared to have been hacked off, and a black cloth draped over his head”.

“I heard it was destroyed yesterday,” a local delivery worker, who asked not to be named, told The Guardian. “I heard it was because it had occupied a farmer’s land.” The People’s Daily newspaper later confirmed Mao’s demise. Officials said the statue had not gone through the correct “approval process” before construction.

‘“Why not use the 3 million to improve local education?’ argued one of thousands of critics on Web, as photos of the golden statue spread,” The Guardian reported. Henan province, the paper said, was one of the region’s worst hit by China’s great famine, a catastrophe that claimed tens of millions of lives that was caused by Mao’s disastrous Great Leap Forward—a bid for breakneck industrialization.

You think Mahatma Gandhi has been spared? Not that Badu was any votary of having statues erected in his image. He would have been repelled by the idea. Yet Gandhi statues abound worldwide. In 2016, a Mahatma statue was to be removed from a university campus in Ghana “after professors launched a petition claiming the revered Indian independence leader and thinker was racist,” according to published reports. The petition stated: “It is better to stand up for our dignity than to kowtow to the wishes of a burgeoning Eurasian super power,” and quotes passages written by Gandhi which say Indians are “infinitely superior” to black Africans.

More than 1,000 people signed the petition, which claimed that not only was Gandhi racist towards black South Africans when he lived in South Africa as a young man, but that he campaigned for the maintenance of India’s caste system, a primeval collective pecking order that still delineates the rank in India of hundreds of millions of people.

Would BR Ambedkar have agreed? Well, he for one had no love lost for one of the most revered Hindu texts of the Sangh Parivar—the Manusmriti of the Dharmashastras.  On December 25, 1927, in an act as defiant and aggressive as the demolition of any physical icon, he organized a protest march to Mahad, south of Bombay, where the participants swore a public declaration of human rights. They pledged themselves to equality, abolition of the caste system and condemned the Manusmrirti, considered to be by many the Hindu code of conduct. A funeral pit was then dug in front of the Speaker’s platform and the Laws of Manu were consigned to the flames.

The most recent incidents of toppled statues which have caught world attention and caused seismic divisions in American society are those of confederate leaders who took up arms against the American union in the Civil War (1861-1865) in defence of the continuation of slavery. I was in the US last year and reported on the violence that was sparked off in Charlottesville, Virginia, centered in part on the city’s plan to relocate a statue of Confederate leader Gen. Robert E Lee. A memorial to Confederate soldiers in Durham, North Carolina, was also pulled down.

“But stiff opposition remains,” reported The New York Times. “Debates are raging over whether the statues should fall because they commemorate those who fought to uphold slavery, or stand because they remind us of a history that cannot be erased. The United States has been dismantling statues since its very foundation.

“One of the earliest recorded instances came in 1776, just five days after the Declaration of Independence was ratified. In a moment that was immortalized in a mid-19th-century painting, soldiers and civilians tore down a gilded statue of Britain’s King George III in Manhattan.

“That dismantling was more than symbolic. The leaden king was to be repurposed  ‘to make musket balls, so that his troops will probably have melted Majesty fired at them,’ during the Revolutionary War, said a letter from Ebenezer Hazard, New York’s postmaster, to Gen. Horatio Gates.”

Globally, iconoclasm, defined by scholars as “the social belief in the importance of the destruction of icons and other images or monuments, most frequently for religious or political reasons”, now also includes aggressive statements or actions against the status quo. Medieval Christians smashed sculptures of Ancient Rome. And in the 8th century, following a literal interpretation of the Second
Commandment as revealed to Moses in the Book of Exodus, the Byzantine Empire proscribed the erection, painting and worship of all icons and persecuted those who would follow the practice.

Portraits or statues of Stalin in Budapest, Hitler all over Europe, Christopher Columbus in Caracas, Cecil Rhodes in Cape Town, Hafez al-Assad in Syria, Muammar el-Qaddafi in Tripoli, Hosni Mubarak in Cairo, the Babri Masjid… have all been smashed into smithereens.

But has any of this statue-bashing lessened tensions or political violence in Egypt or Libya, Iraq or India?  Historical legacies cannot be made or ended by creating or destroying symbols. But we will never change our ways. The poet Shelley, is still the only one who seems to have got it right in Ozymandias:

It depicts a wrecked statue of a renowned king of ancient times, lying forgotten in the desert. The face is distinguished by a frown and a sneer which the sculptor carved on the features with these words on its base: “My name is Ozymandias, king of kings: Look on my works, ye Mighty, and despair!” Most people agree that the poet’s message could not have been more direct: reminding powerful people that their power is only temporary. But the interpretation I like best is that “obscurity is the ultimate destiny of the human race. One day all of our works will lie as dust under a dying sun for some alien traveller to gaze upon and wonder who or what we were. The cosmos itself will whirl and condense, rip apart and eventually die too.”