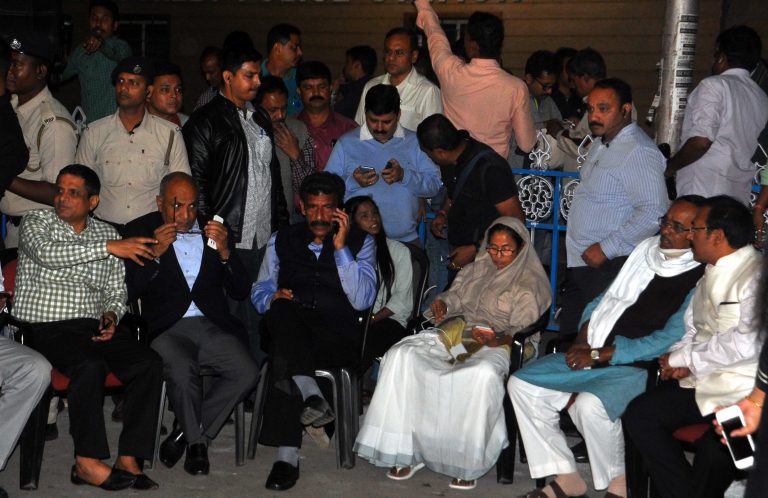 Taking over as the new Director of the CBI, on Monday (February 4), 1983-batch IPS officer Rishi Kumar Shukla must have got a taste of the ominous task that lies ahead of him in his two-year term as head of the agency, known now for stumbling from one crisis to the other.

The ugly scenes that began playing out in Kolkata, since Sunday (February 3) evening, are emblematic of how deep the CBI has plunged into catastrophe; becoming a pawn in the hands of political ringleaders while its credibility gets eroded swiftly.

On Sunday evening, a team of CBI officers was rounded up by the city police in a van after its failed attempt at questioning Kolkata police commissioner Rajeev Kumar for allegedly destroying evidence in the Saradha and Rose Valley chit fund scams. In a never-seen-before theatre of the absurd, the Kolkata police detained the CBI team for a few hours and simultaneously cordoned off the agency’s offices in Nizam Palace and Salt Lake. Shortly after, chief minister Mamata Banerjee rushed to Kumar’s residence and threw her weight behind the officer she termed as one “among the best in the world” whose “integrity, bravery and honesty is unquestioned”.

Banerjee then announced an indefinite dharna as support poured in for her from the Opposition brass, including Congress president Rahul Gandhi, all of whom alleged that the happenings in Kolkata were the result of Prime Minister Narendra Modi and his Union government’s concerted effort to destroy institutions and harass political opponents.

On Monday morning, the raging battle reached the Supreme Court even before its proceedings for the day commenced. Solicitor General Tushar Mehta, appearing for the Centre, sought an urgent hearing of the bench headed by Chief Justice Ranjan Gogoi to allow the CBI to continue its probe in the chit fund scams by questioning Kumar. Mehta claimed that the Kolkata police chief was “destroying evidence” linked with the Saradha and Rose Valley scams which have defrauded lakhs of small investors across Bengal.

The Chief Justice, however, declined Mehta’s request, stating instead: “Lay the material if Kolkata police commissioner is trying to destroy evidence, and we will come down so heavily that he will regret (sic).” The chief justice directed that the matter be listed for hearing tomorrow but also pointed out to Mehta that his application provided “no evidence” for the claim that the Kolkata police commissioner was destroying evidence or scuttling the CBI’s probe into the scams.

Meanwhile, the echoes of the political furore kicked up in Kolkata also reverberated in Parliament with Opposition leaders slamming the CBI’s move and demanding that Prime Minister Modi come to the Lok Sabha and issue a statement. Of course, Modi did nothing of the sort. Instead, Union home minister Rajnath Singh spoke in Lok Sabha trying to defend the CBI’s action and informed the House that Bengal governor KN Tripathi had summoned the state’s chief secretary and Kumar and asked them to immediately resolve the situation.

In his statement to the Lok Sabha, Singh was economical with the truth, telling the House that the CBI’s action was in accordance with Supreme Court’s orders which had directed the agency to investigate the chit fund scams. Singh said that the agency had summoned Kumar on multiple occasions but that the Kolkata police chief failed to do so.

Following the high drama in Kolkata on Sunday evening, Banerjee had informed the media that on December 8, a Calcutta High Court order had restrained the CBI from enforcing the summons it had served on Kumar. Kumar and several other Kolkata police officers had also complained to the high court’s bench of Justice Shivakant Prasad that they were being served summons well after the dates fixed for their questioning by the agency had already passed. The pleas filed by Kumar and his colleagues are scheduled to come up for hearing before Justice Prasad’s bench on February 13.

Kumar’s contention that the summons were being wrongly served can be illustrated from two undeniable facts. Two notices had been issued to Kumar’s colleagues by the CBI in recent months asking them to appear for questioning. First, on November 30 and then again, on December 12. Strangely though, in both these instances, the date of questioning preceded the date on which these cops were to appear before the CBI – i.e for the notice dated November 30, the date of appearance was November 6 and 7 while for the notice issued on December 12, the date of appearance was Dec 10. Expectedly, the Calcutta High Court had suspended both these notices as well as those issued to Kumar. Therefore, the CBI’s claim and Rajnath Singh’s reiteration of it that the Kolkata police officers were ignoring the summons appear far from the facts.

As the drama in Kolkata was unfolding, M Nageswara Rao, the controversial interim CBI Director, told mediapersons in New Delhi that his officials were being intimidated by Banerjee’s police and that he feared that important documents related to the case may be destroyed amid the Centre-State stand-off.

Considering that Rao surely knew on Sunday evening that his interim term as the CBI director would no longer be operational by Monday morning after Shukla takes over as the full-time chief, shouldn’t he have desisted from ordering the action in Kolkata in the first place?

As Shukla, a man with 35 years of experience in the police services but none at all in working with the agency he now heads, takes the helm of the CBI, he will need to swiftly learn the tricks required to steer a rocky ship out of the choppy waters it has been stuck in for months. More importantly, will the Modi government, notorious like earlier regimes, for using the CBI to hound its political opponents, allow Shukla to function in a manner expected of him under the law – especially at a time when the crucial Lok Sabha polls will begin rolling out soon.