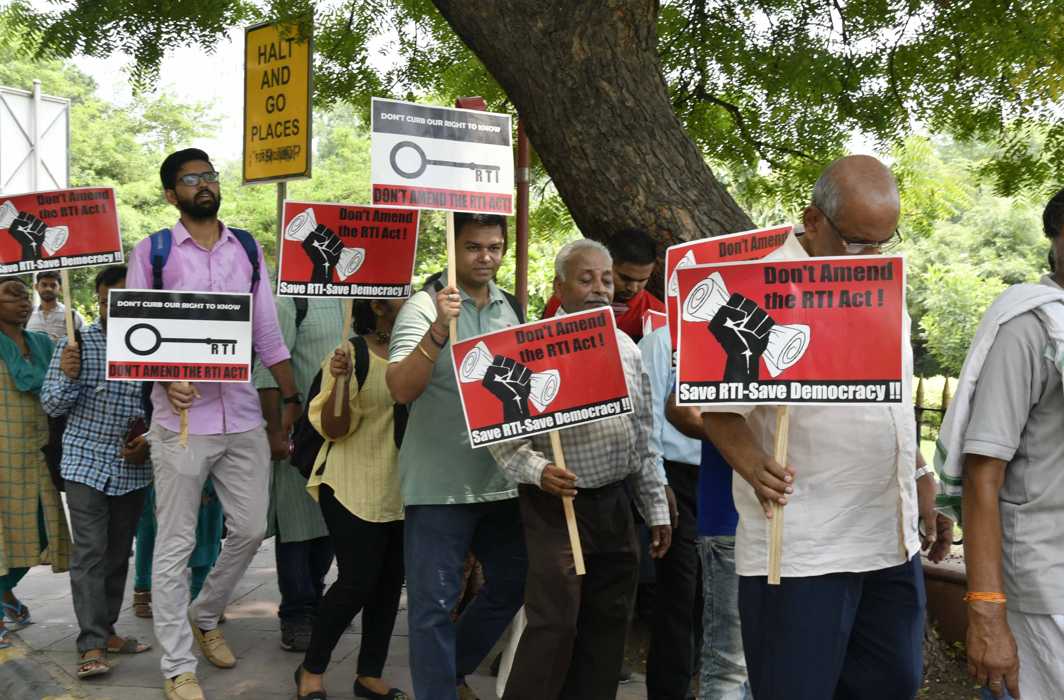 Above: A protest march against the proposed changes in the RTI Act, in New Delhi/Photo: Anil Shakya

The amendments to RTI law restrict citizens from taking power into their hands and curb the independence of Information Commissioners. Is it time to wake up and smell the coffee?

The Right to Information (RTI) Act bestows on citizens the right to own and retrieve information from government organisations. It says that in a democracy, the government belongs to its citizens who are the potentates. The fundamental aim of the Act is to embolden citizens, ensure transparency and make the government liable for better governance. It has helped unearth many scams since 2005. Thus, the Act has helped citizens act as vigilance inspectors in discovering the dishonest deeds of the government.

In 2004, the first draft of the RTI Act was presented in Parliament. It recommended the appointment of Information Commissioners (ICs) to protect citizens’ right to information. The Bill was discussed by a parliamentary committee over six meetings. In it, the chief commissioners were given the same status as secretaries to the government and other commissioners with joint secretaries. The RTI Act, 2005, had its origins in the apex court verdict which was pronounced in 1981.

However, amendments made to the Act in July 2019 were unfortunate. The Lok Sabha passed the RTI Amendment Bill, 2019, within three days of its introduction. Initially, the Telangana Rashtra Samithi, the YSR Congress Party and the Biju Janata Dal opposed it. However, in the Rajya Sabha, they joined strength with the NDA. The Opposition parties failed to put up a united front and this gave rise to numerous questions.

The amendments announced placed ICs under the thumb of the government. Thus, one more autonomous institution will become an enslaved parrot.

The RTI was employed by citizens to get information right from the village ration shop to the RBI. Numerous questions were raised on demonetisation, non-performing assets, defence deals, electoral bonds, unemployment issues, the appointment of various judicious authorities, namely, Central Vigilance Commissioner, Election Commissioners, and so on. Now the government wants to amend this. 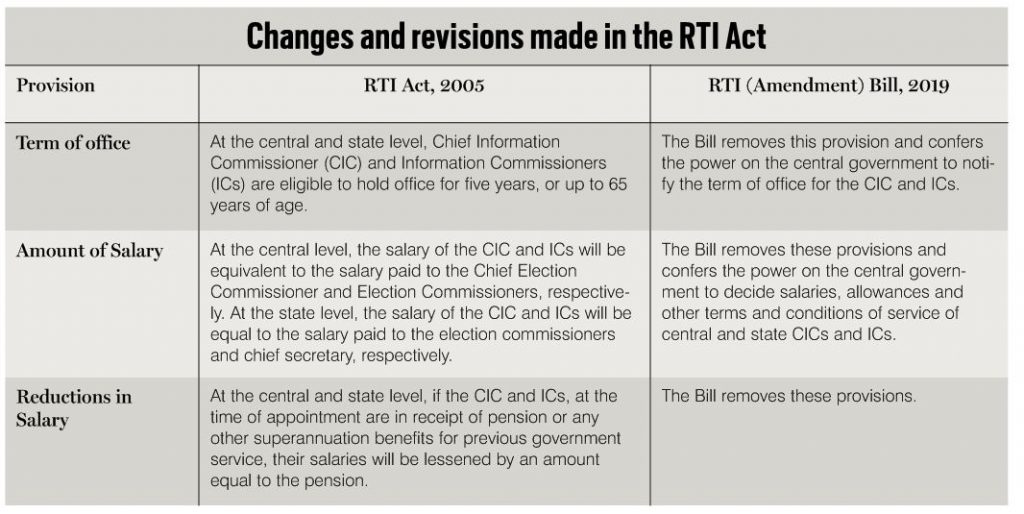 Prime stakeholders, the CIC and the ICs were kept in the dark and not consulted before introducing the Bill. The draft of the Bill was not made available to the members in advance and no time was allotted to them to study the pros and cons. Enough time was also not given to parliamentarians between the introduction and discussion of the Bill. Thus, the Bill’s introduction undermines the provision of the Pre-Legislative Consultation Policy which stipulates public revelation and discussion on draft legislation. Due to this, MPs, citizens and the media did not know the contents of the Bill. All this raises questions about transparency.

The government’s contention that the RTI is not a constitutional right cannot be upheld. Numerous judicial pronouncements of the Supreme Court have conferred this right on the citizens of the country. The ruling government is also of the opinion that the RTI Act was passed in a hurry in 2005. According to sources, all the provisions were critically evaluated by the Parliamentary Standing Committee after consulting governmental, non-governmental and related stakeholders in 2005. While the government argues that amendments to the Act are routine streamlining and rationalisation of procedures, the haste and mystery should not undercut citizens’ right and obstruct itchy questions.

Many concerned citizens exhibited their discontent regarding the amendments and felt it was a bid to hijack democracy. It is sad that the government wants to weaken the strong legislation which gives power to citizens to raise the flag against the government in various spheres.

Citizens should wake up to save the RTI. They must write to the president, asking him not to sign the Bill. It is the responsibility of the citizens to safeguard the Constitution. In addition, we can force the government to focus on the real challenges faced by independent organisations and send the Bill to a Parliamentary Select Committee for in-depth verification. The government may amend a law but cannot stop a united movement. If we fail to save the RTI, this sunshine law will lose its gleam.

Sadly, there has not been sufficient public pressure on the government to abstain from murdering the true spirit of the original decree. Poor people need food and not transparency and freedom. They are aware that they have been deprived of their basic rights through a net of false promises based on documents that are mentioned, but never publicised. But as per the RTI, these documents were made available to all. This is the main reason why we must oppose any law which makes the RTI misleading and deceptive.

Although the UPA government gave a huge gift to the country in the form of RTI, it failed to market it properly. The BJP, on the other hand, grabbed the RTI as a golden opportunity to expose corruption and other cracks in the UPA government. However, the hasty amendments to the Act make us ask valid questions: Why is the government scared of RTI? Does it want to continue the autocratic style of governance? Is the government worried that the RTI is strong enough to topple it from power? There are many questions to be answered.

—The writer is a Goa-based financial and tax specialist