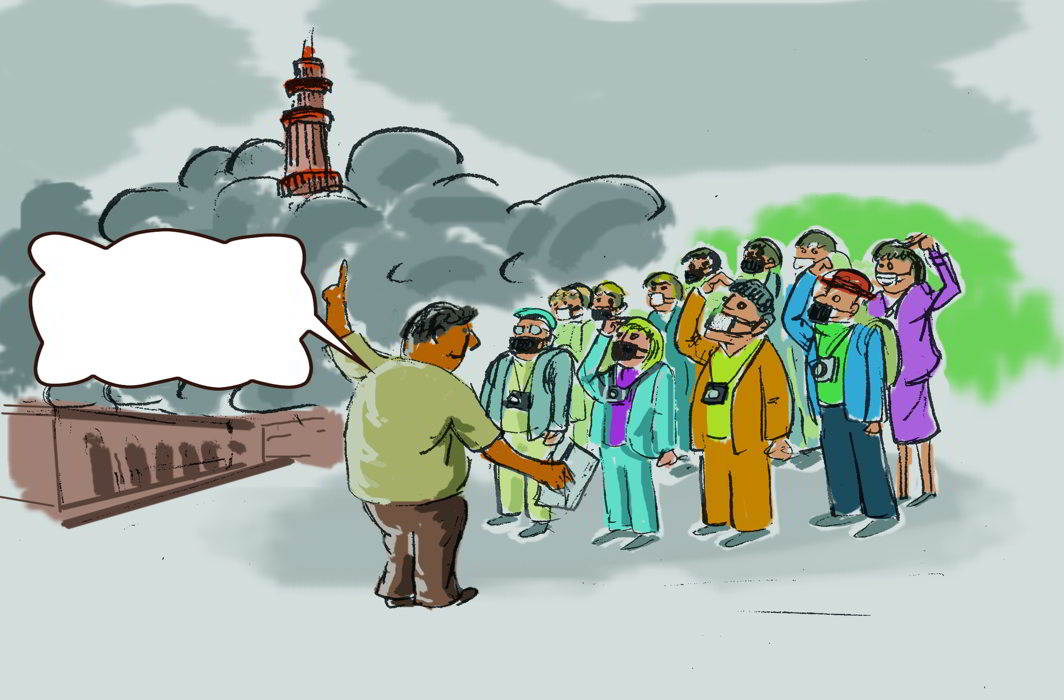 Residents of the capital are getting used to odd things happening in their lives, like odd and even, which is among the measures being taken when measurement of pollution levels goes through the smokestack. It’s causing a lot of chaos and problems and darker days lie ahead. Here are some areas where things have taken a peculiar turn.

Policing: Senior officers at police headquarters are being close-mouthed but sources confirm that they face their darkest hour. With everyone forced to wear masks, how do you tell the good guys from the bad guys? In the movies, apart from superheroes, only crooks and terrorists wore masks but now that burre din has come, democracy in the new India means that all are equal. Or equal looking. The worst hit are the cops manning CCTV feed from all over the city. Trying to spot criminal activity through the smog and dust is as difficult as getting Amarinder Singh and Arvind Kejriwal to sit at the same table.

Homes: Picture this scene. Husband: Is that you darling? I can’t see very well so I am going to switch all the lights on even though its midday. Wife: The lights are already on and so are the fans. Husband: I can’t even read the newspapers, it’s so dark and gloomy but I heard on television that the pollution level is life-threatening and this darkness at noon is depressing. Let me give you a hug, darling, suddenly I am feeling in need of some physical reassurance. Wife: You are damn right it’s life-threatening. That woman you are embracing with such joyful physical abandon is the maid!

Red Light Area: For a year, it has been shrouded in darkness, and not just now. Here’s why.  Sex Worker: Hello darling, looking for a good time? Man: No, I’m looking for the nearest political party office to see if I can get a ticket. I must have turned into the wrong street, thanks to the fog. Sex Worker: Well, in either place you get screwed but we are more desperate than politicians looking for votes, and it’s nothing to do with the pollution. Man: Why is that?

Sex Worker: Demonetisation. The law minister, Ravi Shankar Prasad says that prostitution has taken a nosedive after notebandi. Since this government does not believe in fake news, we have to assume it’s true. We now carry POS machines. You can call us Postitutes!

Shop Owners: The retail scene tells us how pollution affects business. First shop owner: I was rubbing my hands in anticipation and not because winter is here. This is the wedding and festival season in the NCR when sales go through the roof, and I have stocked up with wedding outfits and gift items and Christmas goodies but I haven’t seen any customers. Second Shop Owner: You know, AQ levels are also going through the roof so it’s difficult to see anything but I am also rubbing my hands, in glee. First Shop Owner: I can see that! I also see long lines of customers waiting for entry to your shop and none outside mine. What’s the secret? Second Shop Owner: I changed my product line to just three items: anti-pollution masks, air purifiers and proximity sensors for cars.

Transport Ministry: Bureaucrats at the ministry of transport are at their wit’s end, thanks to the conflicting signals they are getting. Their bosses say issue instructions to curb vehicle purchases in NCR since it is a major cause of pollution. Once they get home, the real bosses, aka their wives, are after them to buy a second car so they can overcome the odd-even restrictions. No marks for guessing which boss they are going to listen to.

Tourist Guide in Delhi: Winter is also the foreign tourist season but those headed for Delhi are in trouble. Here’s why: Tourist Guide: That is the famous Qutab Minar, its legend has grown through the mists of time. Foreign Tourist: I can see that, I mean I can see the mist but nothing else. Our advisory warned us about things that disappear in India. Tourist Guide: According to the environment minister, there’s no need to panic. Everything should be fine in a week or two. If you have to extend your stay, I know a great hotel…