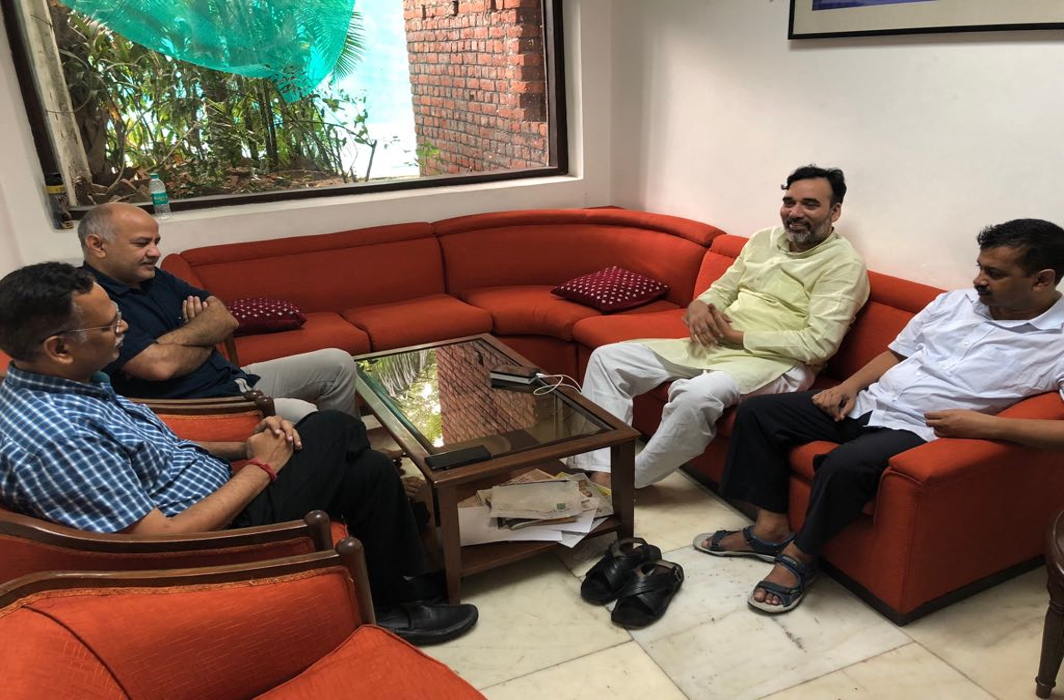 The primary goal of the Occupy Movement, a global form of protest, was to advance new forms of democracy. In India, we are seeing a new manifestation of that as Delhi Chief Minister Arvind Kejriwal and his colleagues occupy a waiting room at Raj Nivas, the office-residence of the capital’s Lt Governor, Anil Baijal, to protest the lack of democratic functioning. Here’s how they spend their time:

Sisodia: Actually it’s been four days of occupying these sofas, so my daughter says that we are officially having a sleepover, something I never allowed her to do, as she reminded me.

Satyendar Jain: Four days without a shower or shave, plus having joined my senior colleague Sisodia in a hunger strike, is the height of sacrifice, Anna Hazare be praised. Has anyone noticed, when we line up to use the only loo, we all say “Pehle Aap”? Ironical, no?

Gopal Rai: Has anyone also noticed that the LG’s office only has LG air conditioners? Talk about self-promotion.

Kejriwal: This LG is all hot air, and he is still acting like the Governor General. You were talking about ironies, how’s this: the LG is unelected. The CM, that’s me by the way, is elected by a thumping majority, and yet he is the one giving us a thumping.

Sisodia: We are here resting in the LG’s office, but the real power rests with him. What sort of an arrangement is that?

Kejriwal: Well, firstly we are protesting not resting, even though the photos look like we are all playing video games in someone’s drawing room. Delhi governance is a ridiculous arrangement that makes me half a CM and makes me look ridiculous. I am not going to take this lying down.

Sisodia: We know that the LG is acting with the support of the PM and the HM. We know he met the HM yesterday for a long chat. Is it possible they could be planning a PR coup?

Jain: The public is with us. Our relations are good.

Sisodia: That’s not what I meant by PR. I meant President’s Rule.

Rai: That would make de jure what is de facto right now.

Sisodia: De fact of the matter is that such a move would gain us public sympathy and dent the government’s record on federalism, which is pretty poor anyway.

Rai: We are under bureaucrat rule right now, with them refusing to work with us. Could it really get any worse? We have a job with no work being done.

Jain: Under Central rule, we won’t even have a job, we can join the list of 31 million people who are unemployed.

Kejriwal: He wouldn’t dare, President’s Rule would be a PR nightmare for the government with Lok Sabha elections looming on the horizon.

Jain (wistfully): Is that a waiter looming on the horizon. This government has shown it is hungry for power, after three days, I am pretty hungry but they take the cake, and eat it too…

Kejriwal: We must be steadfast like Gandhi, and refuse to break our fast till our demands are met.

Kejriwal: I meant the original Gandhi. He wore spectacles and a Gandhi cap and sacrificed a lot on behalf of the people. I hope the public spots the resemblance. It’s the only way to stop this regime from imposing Central rule.

Sisodia: By the way, to while away time, my daughter suggested a video game for my mobile phone. It’s called Doom, quite apocalyptic, or appropriate.

Kejriwal: Doom or bust, we must put down our foot with a firm hand. It’s a question of principles.

Sisodia: Our face-off with the Chief Secretary and their refusal to do any work reminds me of Peter’s principle. It says that in a bureaucracy, accomplishment is inversely proportional to the volume of paper used.

Jain: I recall another one which reminds me of our present predicament: If anything can go wrong, it will do so in triplicate.

Kejriwal: We have no time for aphorisms.  We are taking on the might of the Central government and their executioner, Mr Baijal, who, let me remind you, is a former bureaucrat himself. He knows the way the game is played.

Sisodia:  This room is starting to resemble a mousetrap.

Jain: It reminds me what an American President once said: “Even if you invent a better mousetrap, the government will be sure to build a better mouse.”