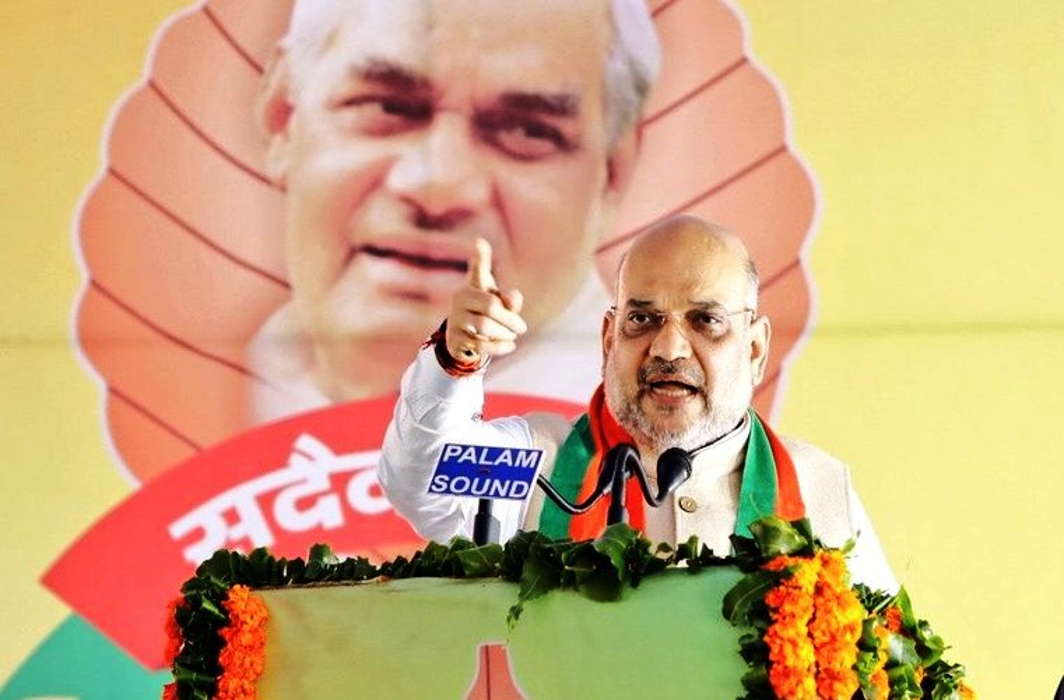 Amit Shah has caused serious birthing pangs in political circles with his boastful promise that the BJP will rule for the next 50 years. Other political parties have taken his claim with a pinch of Patanjali salt but within the party, there is a frantic rush for the maternity ward and Janam Patris to ensure there are no babes in the wood as far as the BJP’s emerging leadership is concerned, with pampers for pampering and grooming already underway. Here’s how politicians are gearing up for 2068!

First Minister: I thought I was good at electoral arithmetic but this version of the Pythagorean Theorem by Amit Shah has upset all my calculations…

Second Minister: What has the Pythagorean Theorem got to do with Amit Shah? I always thought he was a graduate in bio-chemistry?

First Minister: It is now political bio-chemistry but he has come up with a new version of the Pythagorean Theorem which now reads B+J+P=50 which means it will take ages for a new leadership to emerge. All my colleagues are taking a new look at the Janam Patris of their offspring. As they say, leaders are born, not made.

Third Minister: I have been making my calculation on just janams. Modi is 67 so he will no longer be the unquestioned leadership choice…

First Minister: That is blasphemy! He is invincible, undefeatable, indefatigable, ageless, endless, indissoluble and indestructible. Modi is India and India is Modi, or since he likes acronyms so much, he stands for Me Or Dynastic India.

Second Minister: That is all very well, but, dare I say it, he will be 117 years old! Can he really be expected to be alive till then?

FM: His spirit will live on forever (whispering: “in case there are any listening devices”) but by my calculations, looking at the current cabinet, only one minister of state, Anupriya Singh Patel, will be old enough, or young enough to be around—she will be 85, the same age as Amit Shah’s son Jay, but look at the rest, Amitbhai will be 113, Rajnath is 67, the same age as Modi, Jaitley will be 115, and even with a kidney transplant, his other organs of state will have collapsed.

SM: I have told my son to forget about Harvard and Oxford and focus on having lots of babies so they can enter the RSS very young—judging by the current leadership, that’s the most important entry in your bio for a future in the BJP.

TM: I have bought my grandson a tea estate, by my calculation, chaiwallas are the hot new flavour in politics.

FM: I consulted my Jyotisha—he says in the year 2068, there will be new stars in the Milky Way, so any potential leader must make cow protection their main crusade.

SM: That is what I have been puzzling over while deciding whether to groom my son or grandson, the son will be 65 when the next generation takes over, which is the peak age for politicians in India, but if I groom my grandson, what agenda will I teach him to follow?

SM: By then, as this government has promised, there will be no poor people: they will all have jobs, with health insurance, 15 lakhs in their bank accounts, houses with electricity, water and toilets, in other words, acche din. Petrol and diesel prices will not matter since everyone will have vehicles running on gas and hot air. My God, what a country to rule over, a superpower! Have I forgotten anything?

FM:  My astrologer is well trained and he says the future lies in bullet trains, smart cities and the banking sector..

TM: But what about all those NPAs?

FM: All those crooks hiding in London, Antigua and in transit will be brought back and made to pay back every rupee so the banks will be flush with funds.

SM: But that is their money?

FM: Let’s not quibble about minor details. In my humble opinion, if the BJP is to rule for 50 years, the sectors to avoid for our kids and grandkids are the Media, Activism, NGOs, the Gandhi family, defence deals, educational institutions, except Institutes of Eminence of course, and avoid becoming writers, rationalists, thinkers and columnists. Our kids and grandkids have to learn these lessons if they are to make it big in the new India.

SM: I hate to play spoilsport, but there’s one thing that puzzles me about all this effort in grooming our kids to make it to the top.

SM: The two top political leaders and contenders for the Prime Minister’s chair are Modi and Rahul Gandhi.

SM:  They both happen to be bachelors…just saying.