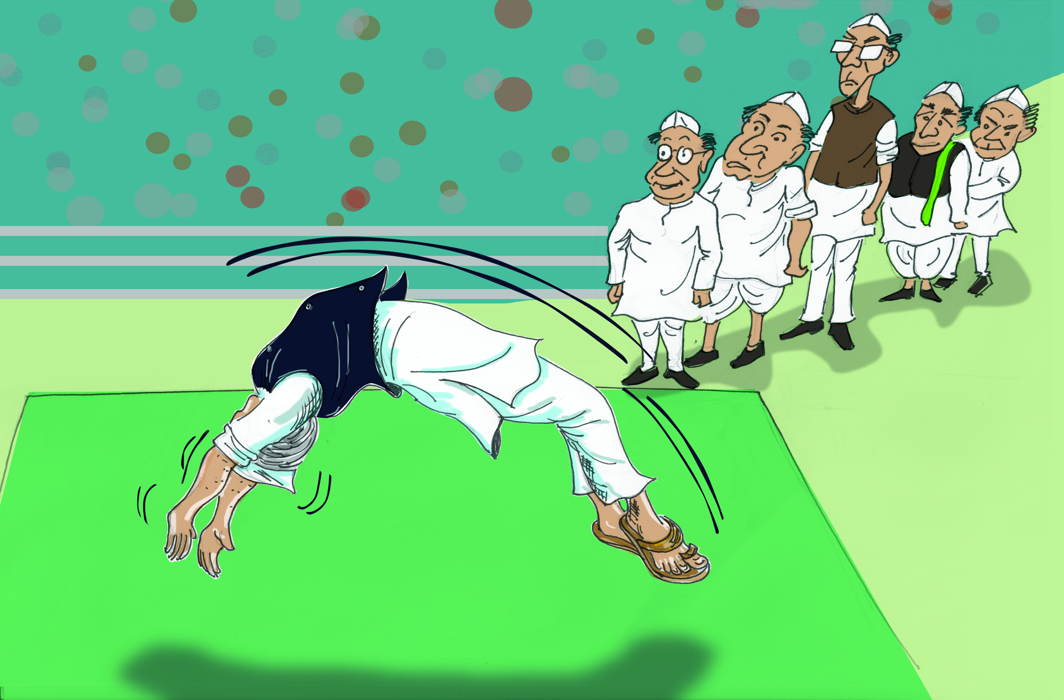 It was I & B Minister Rajyavardhan Rathore who kicked things off with his fitness challenge, posting photos doing push-ups on his office floor and giving a new twist to the floor test. He challenged others to match his moves. No one can beat the Prime Minister when it comes to beating his own 56 inch chest, so he has joined in along with Virat Kohli and a host of celebrities eager to flaunt their six packs. Adding fuel to the fire was Rahul Gandhi who instead of pumping iron, asked about rising prices at petrol pumps. While we await the flood of videos and photos of people working out—sadly many of our countrymen are not working at all—here’s the ultimate fitness challenge: the Floor Test Challenge. Here’s how it works.

Candidate Selection: Much like choosing players to represent the country in the Football World Cup, players are selected on the basis of their skills in dribbling past opponents, tripping up opposing players and gaining maximum crowd support, whether paid for or voluntary. Based on the fitness mantra that wealth is health, those with deep pockets are given first preference. Those with a proven track record of (a) having won previous contests, or (b) having gone to jail on corruption charges (a la Yeddyurappa) or (c) having the right caste credentials are given preference shares.

The Weight Loss Programme: This is where the men are separated from the boys and only the fittest survive. The original list is whittled down and those who display the qualities to make the cut are officially given the title of netas and a non-refundable ticket along with the booklet—that no one reads or follows—called the manifesto. It has been replaced with the individual’s choice of campaign rhetoric—promising non-existent jobs, pledging to attract non-existent industry, waiving off all loans, and as many freebies as one can think off, from free meals to education to mobile phones and above all, freedom to create mayhem (West Bengal is the market leader when it comes to election violence, but other states are in hot pursuit). During this period of wooing voters, campaign speeches are secondary to the activity taking place, away from the beady eye of the Election Commission, namely the distribution of money. In developed countries, it would qualify as a bribe, but in India, it is perfectly acceptable, so acceptable that the money distributed in a prestige election like Karnataka would increase the country’s GDP by a few decimals were it to be a legal transaction.

Buy Buy Democracy: Once the dust has settled and the winners are declared, is the real challenge—the floor test. These days it doesn’t matter if a party has won 2 seats or 200, buying legislatures with a bundle of money and a ministerial berth can change all equations, the Constitution and democracy be dammed. Like floor exercises in the gym, a floor test can turn a six pack into a pear shaped disaster. Witness the sorry sight of Yeddyurappa being chief minister for three days, promising loans and waivers and corruption-free governance, and then having to waver goodbye as he quit and left the state assembly in disgrace and much embarrassment.

The Last Resort: This is the new five star twist in the numbers game; and it turns the famous saying on its head—politics is the last resort of the scoundrel, now resorts have become the politics of the scoundrel. Winning candidates are treated like royalty; even the Kohinoor is not as well guarded, nor are the royals who wear it occasionally, treated with such indulgence. From spas to swimming pools, all-day massages, five-course meals and exotic drinks, a range of entertainment and activities to maintain the loyalty factor and guarantee an appearance at the floor test. The only hitch is that cell phones are monitored as closely as a suspicious wife would.

Taking the Floor: The ultimate test: maintaining the herd mentality while moving to a five star hotel in preparation for the most important vow after marriage—to honour, obey and be as one from this day forward, richer not poorer, with power and pelf, but only until the next election comes along.