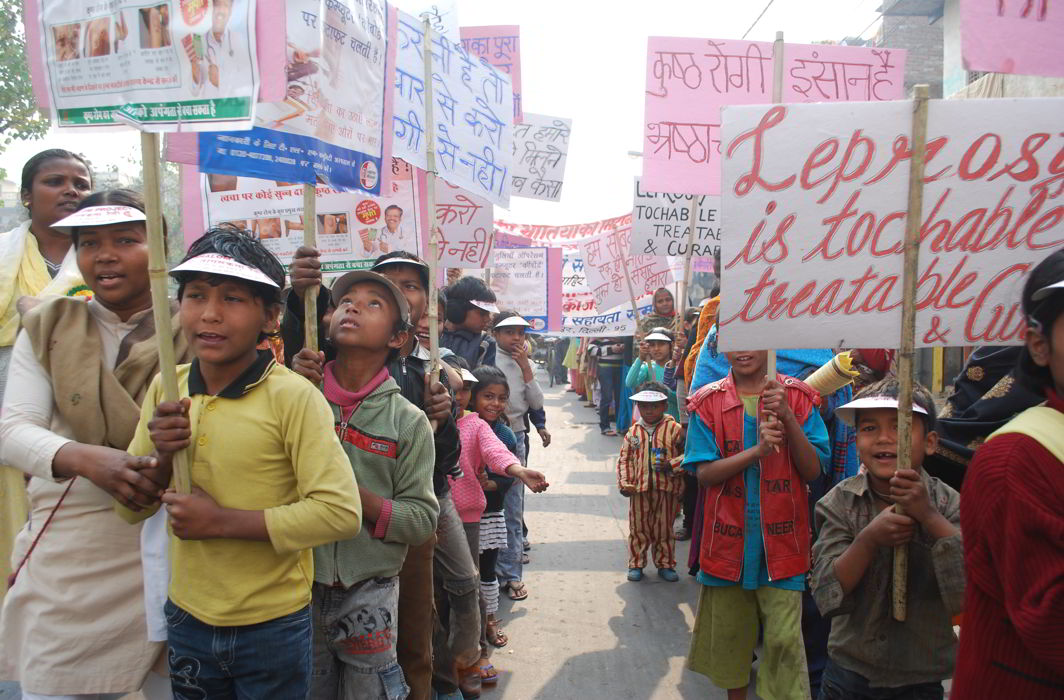 Above: Beneficiaries of an anti-leprosy project raise awareness about the disease on World Leprosy Day in India. Photo: leprosymission.org.uk

At first look, a writ petition filed by an NGO under Article 32 of the Constitution seemed quite ambitious to the Supreme Court bench of Chief Justice Dipak Misra and Justices AM Khanwilkar and DY Chandrachud. The petition also seemed technically unsound to the bench because it prayed for declaring as many as 119 central and state laws unconstitutional.

The seminal issue highlighted in the petition was that in the second decade of the 21st century, there was no justification to treat a person suffering from leprosy as someone to be kept away from the mainstream of life because of the age-old belief that the disease is a sin, infectious or something to do with genetics.

The petition led the bench to say: “With the discovery of modern medicines, the disease has become absolutely curable and, therefore, the steps are required to be taken to cure them and bring them in the society and not to keep them away in the leprosy homes where they feel different and sometimes alien.”

The petition, filed by Vidhi Centre for Legal Policy, a think-tank, brings to light the gross violation of the fundamental rights of persons affected by leprosy under Articles 14, 19 and 21 of the Constitution by the continued existence of archaic and discriminatory provisions under 119 central and state laws. The petition has annexed a table of the impugn­ed provisions in these laws.

The petition says that provisions in these laws unfairly discriminate against persons affected by leprosy by denying them equal treatment under personal laws, in matters of employment and appointment or election to public office, as well as access to and free movement in public places. “This unequal treatment irrationally treats persons affected by leprosy as a separate class on the basis of a medically inaccurate and outdated conception of the infectious nature of the disease and without taking into account the effectiveness of the prevailing standard treatment for the disease,” the petition states.

Filed by Vidhi Centre for Legal Policy, the petition brings to light denial of the fundamental rights of those affected by leprosy under Articles 14, 19 and 21.

It further says that the very existence of such provisions in the statute books violates the right to a life of dignity of persons affected by leprosy, which is an integral facet of Article 21. “As such, the impugned provisions stigmatise and isolate persons affected by leprosy, even though with the latest medical advancements, leprosy is rendered non-infectious after the first dose of Multi-Drug Therapy (MDT),” it says. MDT, incidentally, is the WHO-recommended treatment regime for leprosy.

The classification in the provisions is also not founded on any intelligible differentia and bears no rational nexus to the objects sought to be achieved by the impugned provisions, thereby violating the right to equality before the law under Article 14 of the Constitution, the petition states.

Some of the impugned provisions additionally violate the right to move freely in India and to practise any profession, or to carry on any occupation, trade or business guaranteed under Article 19(1)(d) and Article 19(1)(g) of the Constitution, respectively, the petition says. The restrictions imposed are not reasonable in the interests of the general public, the petition argues.

It echoes the recommendations of the Law Commission’s 256th Report on Eliminating Discrimination against Persons Affected by Leprosy. On the basis of the Law Commission’s research and findings, the petition prays for directions from the Supreme Court for the repeal of provisions that discriminate against persons affected by leprosy. It says that the existence of such laws and their enforcement by courts have contributed to the historical stigma and discrimination faced by persons affected by leprosy, making it all the more important to declare them unconstitutional and strike them off the statute books.

Judicial pronouncements in the past have reinforced such stigma. Thus, the Supreme Court had in Swarajya Lakshmi vs GG Padma Rao (Dr), 1974, granted divorce to the respondent because his wife was affected by leprosy. The Court had, in this case, described leprosy as incurable and had recorded that the experts did not yet consider that with all the advances in physiotherapy, surgery or orthopaedic surgery, it was possible either to cure the disease completely or to correct the deformities and mutations that were often caused by the disease.

The petition points out that medical advancements made in the 43 years since the above decision was handed down by the Supreme Court have entirely altered the manner in which leprosy is treated. Thus, the eradication of the disease does not require segregation to prevent its dissemination, as held by the Supreme Court in 1974. The first dose of MDT, it is further claimed, renders the disease non-infectious.

The petition reveals that the Supreme Court had, in 2008, relied on incorrect medical information regarding the eradication of leprosy while upholding a provision in the Orissa Gram Panchayat Act, 1964, that disqualified a person affected by leprosy from occupying a civic post. In Dhirendra Pandua vs State of Orissa, 2008, the Supreme Court observed: “It is true that now with aggressive medication, a patient may be fully cured of the disease, yet the legislature in its wisdom has thought it fit to retain such provisions in the statute in order to eliminate the danger of its being transmitted to other people from the person affected by the disease…”

Arguing that leprosy continues to be viewed with the same revulsion and disgust as it was during the Middle Ages, the petition says that the impugned provisions have contributed to this discriminatory mindset.

MDT was introduced in India in 1985, and has been instrumental in eradicating leprosy as a public health problem since 2005. The National Leprosy Eradication Programme, a sponsored scheme of the Union ministry of health and family welfare, provides free MDT treatment to persons affected by leprosy through primary healthcare centres under the National Health Mission. Under MDT, a combination of powerful drugs such as Rifampicin, Clofazimine and Dapsone are administered to those diagnosed with the disease. According to WHO, the first dose of MDT kills germs and stops the spread of leprosy.

These findings have encouraged some high courts to declare that measures or provisions that exclude persons affected by leprosy from society have no scientific or rational basis. In Maharashtra State Road Transport Corporation vs Uttam Shatrughan Raserao, 2002, the Bombay High Court, while hearing a case regarding the eligibility of a person for supplementary gratuity, rejected the argument that leprosy was incurable or that it rendered persons medically unfit for work.

In the case of Bajal Basappa vs Keshava, 1967, the Karnataka High Court had struck down Section 47 of the Madras District Municipalities Act, 1920, which disqualified persons affected by leprosy from voting in an election to a municipal council.

Significantly, this decision, rendered before the medical advancements in curing leprosy were made, held that there was no reasonable basis for disqualifying a person affected by leprosy from exercising his franchise, that the classification of “leper” and “non-leper” was not based on an intelligible criterion, and that it had no reasonable relation to the object sought to be achieved by the rule of adult suffrage.

In 2015, the Law Commission, in its 256th report, recognised the effectiveness of MDT and recommended the repeal and amendment of provisions under eight central laws that allowed public authorities to isolate persons affected by leprosy from the general population and precluded them from accessing public services as well as benefits under personal laws. The Commission recommended the adoption of a model law to repeal and amend discriminatory provisions under eight central laws, besides proposing several affirmative action measures for persons affected by leprosy.

The 119 laws that discriminate against persons affected by leprosy are broadly grouped into five categories, namely, those that

i) Cause stigmatisation and indignity to persons affected by leprosy

iv) Impose disqualifications on them under personal laws

v) Bar them from occupying or standing for public posts or office.

In 2016, the parliament repealed the Lepers Act, 1898, but did not find it fit to repeal or amend any of the impugned provisions in the central laws. The state legislatures, too, have not found it a serious enough problem to be remedied by repealing or amending their laws to stop discrimination against leprosy-affected persons. The Rights of Persons with Disabilities Act, 2016, also does not address the problem of discrimination against such persons under the impugned provisions.

In 1967, the Karnataka High Court struck down Section 47 of the Madras District Municipalities Act, 1920, which disqualified leprosy patients from voting.

In view of these, the petition contends that there are compelling reasons for the Supreme Court to intervene and render justice in the matter. It is because the right to life, as embodied under Article 21, includes within its fold the right to live with dignity and self-worth, even for those with disabilities.

Section 13 of the Hindu Marriage Act, 1955, for instance, allows a marriage to be dissolved by a decree of divorce on the ground that the other party has been suffering from a virulent and incurable form of leprosy. The petition states that such a provision does not take into account the sheer indignity and mental trauma that a person affected by leprosy will suffer on account of being brutally separated from his family. It deprives persons affected by leprosy of their fundamental right to a life of dignity, the petition suggests.

The petition, by annexing a list of such discriminatory provisions, makes it easier for the Court to review and consider the explanation of the central and state governments for retaining them in the statute books. The existence of such a large number of provisions under various laws points to the severity and scale of discrimination and stigma suffered by such people.

As the petition is non-adversarial in nature, it is expected that the centre and states will, on their own, seek to amend or repeal these provisions, without the intervention of the Supreme Court.