The turmoil over the National Eligibility and Entrance Test (NEET) has been going on for a while in Tamil Nadu. With massive protests and marches continuing and a Dalit student even committing suicide over it, the Supreme Court was forced to take note of it.

On September 8, a three-judge bench of Chief Justice Dipak Misra and Justices AM Khanwilkar and DY Chandrachud passed an order saying: “We may clearly state here that a peaceful protest or criticism or dissent is different than creation of a law and order situation. Every citizen of this country has a fundamental right to peacefully protest and demonstrate, but not to cause a situation that results in violence and paralyzes the law and order situation.” The bench was hearing a petition filed by GS Mani, a Supreme Court advocate.

NEET is the first hurdle for a student to pass to get a seat in a medical college in India, be it government-run or private. In Tamil Nadu, there have been huge protests by thousands of students. Almost all political parties, except the BJP, have come out vehemently against the implementation of NEET. This has created a law and order problem for the state government.

The issue was further highlighted when Anita, a 17-year-old Dalit girl, committed suicide at her home in Kulumur village in Ariyalur district, 300 km from Chennai, on September 2. Anita had challenged in the Supreme Court the centre’s decision to make NEET the sole basic criteria for getting admissions to the MBBS course. However, the Court had dismissed her petition along with a clutch of other petitions. 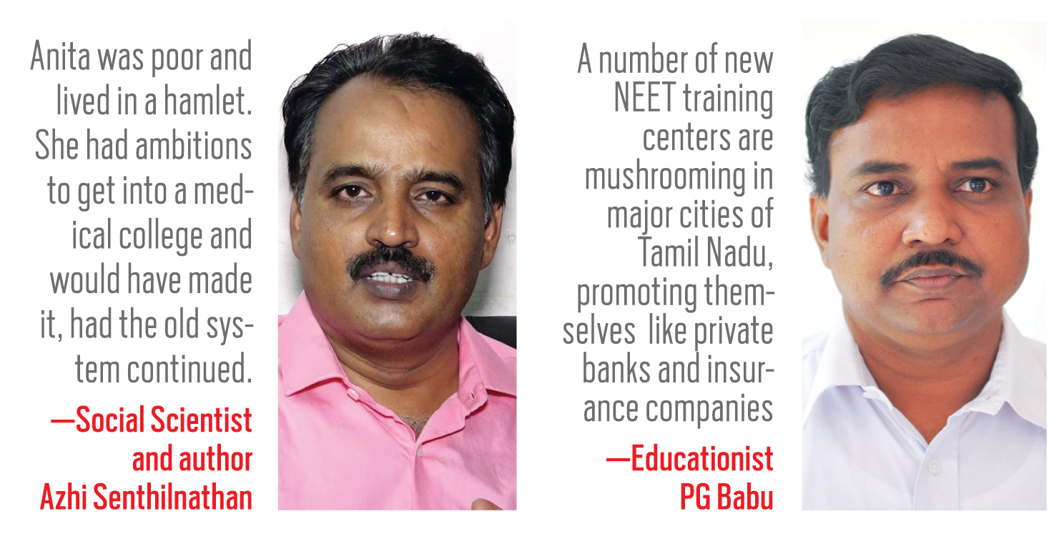 Anita scored 1,176 out of 1,200 marks in her Plus Two school-leaving exam under the state board. According to the state education department’s evaluation, Anita scored 199.75 out of 200 for engineering and 196.75 for medicine, which would have ensured her a seat in either stream without NEET. However, her family said she had scored only 86 out of 700 in NEET. Later, in an interview to a Tamil news channel, Anita, with tears in her eyes, described how helpless she had felt while appearing for NEET.  “NEET is basically an unfamiliar national syllabus and if only the government had given at least one-year grace time or made it clear in the last academic year itself that NEET is a must for getting an MBBS seat, I would had prepared myself for it.”

After her death, road and train blockades began spreading across the state. On September 8, the DMK held a massive rally in Tiruchi district, 320 km from Chennai, opposing NEET. Advocate GS Mani, in his petition before the Supreme Court, categorically asked how anyone could indulge in open protests and rallies against a Supreme Court order which dismissed all petitions against NEET. He wanted an outright ban on these protests.

So why is Tamil Nadu alone opposing NEET? Aazhi Senthilnathan, a Chennai-based author and social scientist, said: “Those who know Tamil Nadu’s politics and its social structure can easily understand this. While in many states, Anita would not have completed her schooling itself, Tamil Nadu’s broad-based education system ensured that she did. She was poor and lived in a hamlet. She had ambitions to get into a medical college and would have made it, had the old system continued. This is one of the greatest achievements of Tamil Nadu’s education system and its well-thought-out policy decision. You have to understand this from the angle of the ‘social justice movement’ started in the 1920s when India was ruled by the British. The state strongly aims to keep children in school and get them into college over and above testing them for ‘so-called quality’. The introduction of NEET deeply disturbs a well-settled political question in Tamil Nadu.”

Educationists in Tamil Nadu explained that NEET gives advantage to a CBSE mode of thinking, which students like Anita did not have access to. A major impediment for students living in rural Tamil Nadu, is the costs involved in getting quality training to write the NEET exams. A student has to spend at least Rs 2 lakh to Rs 3 lakh to get proper knowledge and training to write NEET.

PG Babu, an educationist and social activist working among children belonging to oppressed sections, said: “A number of new NEET training centers are mushrooming in major cities of Tamil Nadu. They have started promoting their centers like private banks and insurance companies by calling mobile phone users and talking about the greatness of their centers. But hardly 10 percent of them have the required qualities to impart the needed training. Also, hardly 10-20 percent of parents are aware about the genuine quality of these training centers. You can imagine the loot which will take place in Tamil Nadu in future by these centers.”

The Court order said that every citizen has a fundamental right to peacefully protest and demonstrate, but not to paralyse the law and order situation.

Educationists, social scientists, political observers and almost all major political parties insist that the reason for this issue to crop up is that after Independence, education was in the state list. But in the 1970s, Prime Minister Indira Gandhi put it in the concurrent list. “This was one of the atrocious moves by Indira Gandhi,” asserted Rajan Chelladurai, a lawyer and researcher on Constituent Assembly debates. “But at that time, there was no resistance to it because over 90 percent of the states were ruled by the Congress. Even during the days of non-Congress governments at the centre, there was no one to ask why education should not revert to the state list. Indira Gandhi’s decision to move education from the state list to the concurrent list is one of the major root causes for our failing education system. If at all India wants to maintain its plurality, education should be sent back to the state list. If you read the Constituent Assembly debates, you will know how our forefathers, who came from various walks of life, insisted that education should be in the state list.”

A relook at the entire education policy of our country would do a world of good.