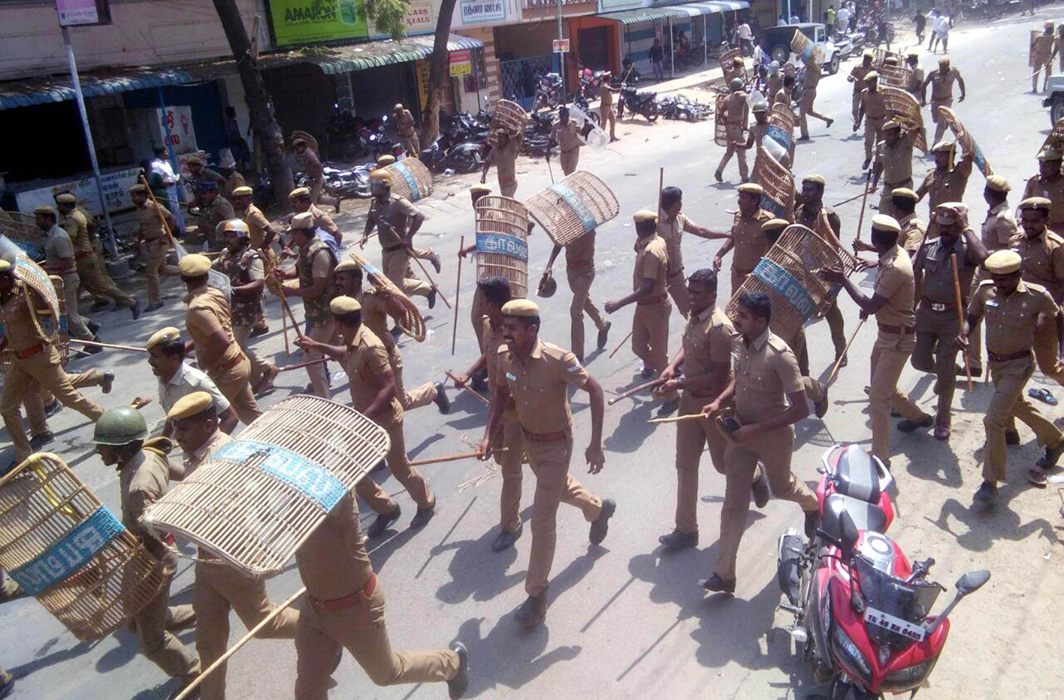 Above: Cops lathicharge protesters in Tuticorin on May 22/Photo: UNI

Politics is the art of the possible, goes the old saying. But it also represents the naked pursuit of power without any moral compunctions, making the impossible possible till a strong counter-reaction kicks in. When 13 people fell to the bullets of police forces recently in Tamil Nadu’s Thoothukudi (better known by its anglicised name of Tuticorin), it was the consequence of actions in 1994 by then Chief Minister J Jayalalithaa.

After liberalisation in 1991, many multinationals came knocking to India to take advantage of this opening up. One of them was a company called Vedanta that was based out of London, but promoted by Anil Agarwal who originally belonged to Patna and started life as a scrap dealer. Unlike the licence permit raj, powers had been decentralized to state governments and Vedanta was able to convince the then Maha­rashtra government to allow it to set up an aluminium smelter in Ratnagiri on the Konkan coast with a capacity of 6,000 tonnes per annum. Five hundred acres of land was also allotted to the company for the purpose.

Even as there were massive local protests, Sterlite Industries, set up by Vedanta for the purpose, was determined to see the project through. But protests escalated as locals realised that once the smelter was in operation, it would release sulphur dioxide and other pollutants that would destroy the flora and fauna of the ecologically sensitive and fragile area. The locals also realised that the jetty proposed as part of the project (to receive imported raw materials from Australia) would advance the sea into the surrounding areas, cutting the coastline. A protest by a 30,000-strong crowd in December 1993, which destroyed some buildings being constructed, put Sterlite on notice. The district collector of Ratnagiri then or­dered a halt in the construction of the project.

Now Agarwal started scouring for better climes. This wasn’t too difficult. Unmindful of the fact that Sterlite had been pushed out of Maharashtra, Jayalalithaa thought nothing of offering the company a slot in Tamil Nadu in Tuticorin in the south of the state. Had she paused to analyse the exact problems the project ran into in Maharashtra, she would have had the common sense to not allocate a site in the Gulf of Mannar where the ecosystem is even more fragile than in the Arabian Sea in Ratnagiri. But those were the heydays of liberalisation and it was fashionable to berate the environmental lobby with the argument that it was anti-development. Moreover, it was the first term of Jayalalithaa and she was keen to be seen as a go-getter.

She was not the only guilty one; the ministry of environment was equally lax and negligent. In 1995, it apparently gave environmental clearance for the project without an Environment Impact Assessment (EIA) report and the Tamil Nadu Pollution Control Board (TNPCB) gave its “consent for establishment” without the EIA.

A year earlier, the TNPCB gave a no-objection certificate (NOC) for the project, provided that it would be 25 km or more inland from the Gulf of Mannar. Moreover, it would have to set up a green belt of 25 m around the periphery of the project. It seems that Sterlite followed these provisions only by defaulting on them.

The Gulf of Mannar is the first biosphere reserve of the country. Located between Tuticorin and Rameshwaram in the Bay of Bengal, there are 21 islands. The area is rich in flora and fauna with 36,000 species, including coral reef, pearl oysters, white algae, reef fish and shrimps and lobsters. In other words, an aluminium smelter in Tuticorin is potentially more dangerous than in Ratnagiri.

Complaints from the plant staff that they had a choking sensation and bouts of coughing started pouring in shortly after it went into operation. The Madras High Court, considering a PIL in November 1998, came across a report of the National Environmental Engineering Research Institute (NEERI) that showed that the operations of the plant contaminated the ground water with arsenic, lead, copper and aluminium. Moreover, the company was churning out products that it was not supposed to. It also noted that the plant was only 14 km from the Gulf of Mannar and there was no green belt around it. NEERI was asked to do a fresh report and strangely enough, within a month reported that all was hunky-dory. NEERI also recommended an EIA, which should have been completed before the plant commenced production! The report was completed many years later in 2003!

Meanwhile, a series of accidents started taking place: there were cases of gas leaks and acid water run-offs in nearby localities after rains. But the company was adamant about increasing its capacity. The Tamil Nadu government allowed Sterlite to increase production to 70,000 tonnes per annum from the existing 40,000 tonnes. But the company was producing much more. A TNPCB report suggested in November 2004 that Sterlite was churning out a capacity of 1,64,000 tonnes per annum. But in 2005, the ministry of environment and forests, instead of suggesting action, advised the state government to regularise the excess capacity.

Cut to 2013. On March 23 that year, there was a massive gas leak from the factory. Though nobody was killed, many were affected and even miscarriages were reported. In April of the same year, the Supreme Court indicted the company and asked it to pay a fine of Rs 100 crore for polluting the environment from 1997-2012. But it refused to close down the plant as its produce is used for the defence, electricity, automobile and other industries. Moreover 1,300 people were employed in the plant.

Five years later, in 2018, the capacity of the plant has increased dramatically to 4,00,000 tonnes per annum. The company now proposes to further increase it to 8,00,000 tonnes per annum. This has the locals up in protest and in late March this year, they had a massive show of strength demanding that the existing plant be shut and a new one not be allowed to come up (the expanded unit will come up at a separate location close by).

The agitation has continued ever since and on its 100th day, a huge rally of protesters was out on the road. According to the police, the agitators turned violent and in consequent police firing, 13 people died. Tamil Nadu Chief Minister EK Palaniswami, ironically from Jayalalithaa’s party, is defending the police action, averring that the opposing political parties are at work.

Whatever be the truth, for analysts, this is a classic instance of development versus environment with the laws skewed against environment. And even then, environment laws are observed in breach or circumvented by post facto approvals. Now, even as the plant is closed, there are apprehensions that copper prices will rise and gainful employment for workers in the plant and those involved in allied activities will be hit.