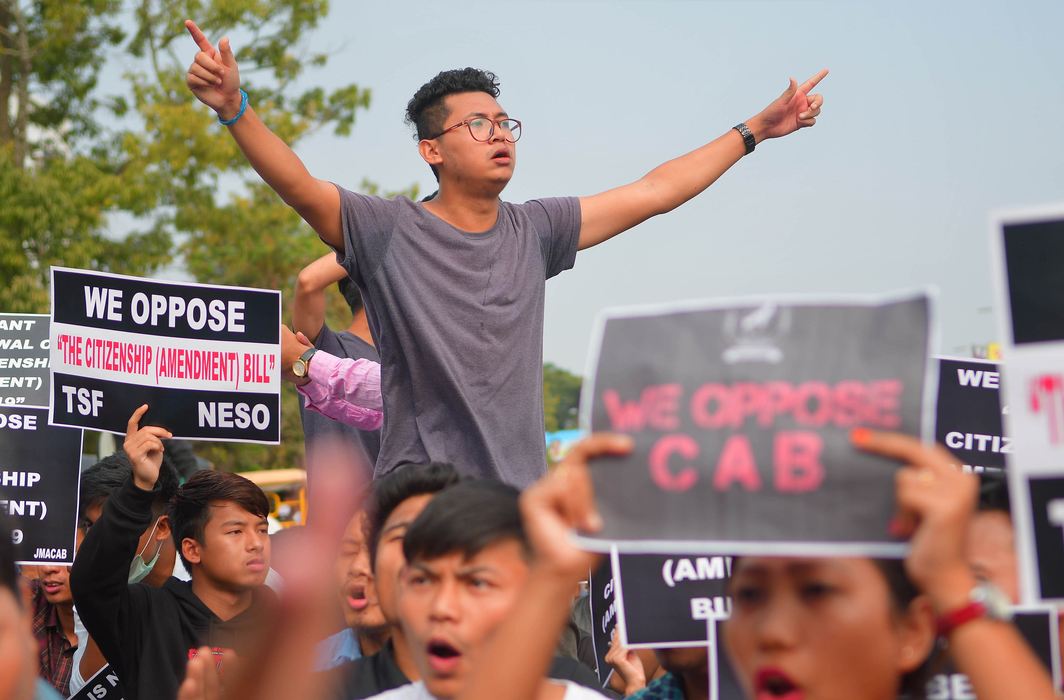 The controversial Citizenship (Amendment) Bill, 2019, gets parliamentary approval but the violence and protests against its discriminatory clauses expose its flaws and minority fears. The SC remains the only hope to salvage India’s secular credentials

It was a fiery debate watched by millions across the country as the Opposition led by the Congress and TMC attacked the BJP government for one of the most contentious and divisive bills ever introduced in the Indian parliament. In the Lok Sabha, Asaduddin Owaisi tore up a copy of the Bill, calling it anti-Muslim and the “first step towards a totalitarian and tyrannical state”. Congress President Sonia Gandhi termed it a “dark day in the constitutional history of India,” while TMC’s Derek O’Brien said the Bill was “taken from the Nazi playbook”.

The Opposition, however, is also to be blamed for being ill-prepared to take on the BJP. After CAB 2016 faltered in the Rajya Sabha, in 2018, the Opposition could have initiated a nationwide debate and approached the courts. Union Home Minister Amit Shah mounted a stout if unconvincing defence, insisting the Bill was not anti-Muslim and declaring its passage “historic”.

That it is discriminatory and lacks constitutional morality was obvious from the communality of critical opinion in the national newspapers, with The Indian Express terming it “poisonous” and concluding its lead edit with these lines: “Now, the judiciary must rise again to the Constitution’s defence, as it has done at several turning points before, and protect the spirit of the Republic: its very soul.” Shorn of the political rhetoric, the Citizenship (Amendment) Bill (CAB), 2019, is about the exclusion of Muslims from those seeking refuge in India, it’s blatantly about opposing Islamic nations and their policies; it’s about uniting the Hindu world. Even as the Northeast and Assam burnt following widespread protests, Prime Minister Narendra Modi went on the offensive before the Bill was introduced in the Rajya Sabha, saying: “Some people are talking like Pakistanis.”

Opposition leaders are confident that the CAB will be stalled or struck down by the Supreme Court as being unconstitutional. Back in 1981, the Supreme Court had reiterated lucidly in RK Garg vs Union of India on an issue involving Articles 14 and 15. Article 14 is perhaps the shortest, plainest and most loaded Article in the Constitution and states simply: “The State shall not deny to any person equality before the law or the equal protection of the laws within the territory of India….” This covers almost every act or policy matter where discrimination can be imagined on the basis of religion, gender, place of birth or any classification that the State might seek to create. This became the basis for caste-based reservation. It has also become the basis of the Opposition’s objection to the CAB which says that by leaving out Muslims—Ahmediyas, Boras, Baluch Pathans and Rohingyas—from the definition of “minority”, a reasonable classification has not been drawn. Second, by ignoring refugees from Nepal, Myanmar and Sri Lanka, a classification of “neighbouring countries” has been conveniently ignored.

Former CJI RM Lodha has already expressed his opinion, saying the Bill might fail on the touchstone of “reasonable classification” as it seeks to differentiate between minorities even within the countries that it seeks to address. The Bill has reduced the waiting period for refuge-seekers from 11 to six years of stay in India. It’s obvious that the claims of Muslims who may have escaped to India from these countries years ago don’t stand a chance as a “persecuted group”. Others similarly placed may get that benefit so the test of “equals cannot be treated unequally” also fails.

The 2016 CAB had failed and the lessons learnt from that have been incorporated in the new Bill. For instance, the advisers to the government have clearly helped it devise what it thinks is a “reasonable classification” by including Christians. Former Solicitor General Harish Salve had been taken into confidence and he is of the view that it’s a reasonable classification to say “persecuted minorities of countries which profess Islam”. Salve also says that: “To say that Sri Lanka and Nepal and Myanmar have not been included is not correct. The objective of the Act is clear; to help the persecuted minorities of the three Islamic countries.” Where the government may score over its detractors is that Articles 15, 21, 26, etc, are applicable only to those who are already citizens of India and have little impact on deciding who could become a citizen.

Ahmediyas may be a persecuted minority but they exist within the larger fold of Islam and if one were to extend that argument then even Shia-Sunni differences may have to be taken into account. It may then extend to those Muslims who settled in Pakistan from India and are called Mohajirs. The government may say that it arrived at a reasonable rational classification, going by the share in population as well as what these countries’ data reflects. As for the Muslims and those who want to come in as refugees or become citizens, there are other opportunities such as political asylum and Section 7 of the Act itself.

The Supreme Court may apply the test of Article 14 and decide that equals are not being treated equally. There cannot be any differentiation amongst those who are being persecuted and religion cannot be the only criteria for such classification. The Bill also fails on the touchstone of leaving out the Sri Lankan Tamil Hindus who have been living in the country for the past 30 years or more. They had been persecuted by the Buddhist-majority state. Why the AIADMK has supported the Bill remains a mystery as it is likely to lose a substantial chunk of its support base in Tamil Nadu. The DMK, of course, has been vocal in its opposition as it has been its longstanding demand in favour of the Sri Lankan Tamils. There is also a huge number of Tibetan settlers in India but they are not from the three countries mentioned in the CAB and so their status quo remains despite the inclusion of Buddhists.

The home minister himself pointed out that on several occasions, Bangladeshis, Sikhs, Tibetans, Ugandans, etc, have been settled by the previous governments through an executive order. It then defeats the very purpose of the amendment. If people have been settled in the past without much ado then it can be done now as well. The CAB and its sister concern, the NRC, may then only be an expensive exercise which the nation can ill-afford. The courts may also seek answers to why the natural resources of a local indigenous population are shared with people who chose to stay back then? It will definitely seek an explanation as to why the amendment does not explain who is a “persecuted person”.

It’s not just the CAB at stake here. It’s a well-directed message: for more than 20 crore Muslims in India that India or Bharat may no longer be a hospitable place. The RSS has always talked of an Akhand Bharat which spreads from Afghanistan to the Northeast, including Bangladesh. It may not be in a position to change the geography of South Asia but it can certainly tamper with the demography. It wants India to become an exclusive Hindu homeland. That suits it both politically as well as ideologically. After all, the two-nation theory was first propounded by Savarkar and the continuous cacophony of “Pakistan Bhejo” may become shriller. The CAB is the weapon that will strike at the very notion of India and its wounds will be difficult to heal. The word “secular” which was added to the Constitution in 1976 may become meaningless.

Worse still, the CAB may be an encouragement for neighbouring Islamic countries to move in a similar direction or be labelled “unable to protect Muslim population in south Asia”. Pakistan has already made it an international issue and with some influential organisations in the US and the EU taking a stand against the CAB and Kashmir, the BJP is walking a dangerous path, but with the confidence that it will earn electoral dividends. The CAB is only the latest in a series of moves that expose its Hindutva agenda. It has reduced the only Muslim-majority state, Kashmir, to a Union Territory with a geographically limited area by deliberately separating Muslim dominated regions of Ladakh from it. The National Register of Citizens was the next step and the strong reactions in Assam and Bengal will ensure that those areas remain plagued by constant strife along with Kashmir and the Northeast. The Northeast has been on the boil even before the Bill was passed in both the Houses. What needs to be appreciated is that each state of the Northeast has its own concerns. Three states were protected by the Inner Line Permit (ILP). It has also been extended to Manipur by Shah. Now Tripura and Meghalaya also want the same regulations.

Shah says that Schedule 6 of the Constitution also protects three districts in Assam. The amendment to the Bill of course does not say all this. It is also silent on the areas in Chhattisgarh, Jharkhand and Odisha which come under the same Schedule. Assam’s prospects are even more worrying. Already reeling under the impact of a botched NRC, it will now have to deal with the CAB which will likely force settlers like Chakmas from out of neighbouring states into their land. The Assamese are clear: they don’t want Bangla settlers, whether Hindu or Muslim. That may be the position in the rest of India. Already short on resources, can India afford more settlers in a country so full of inland refugees? Biharis are refugees everywhere, UP bhaiyas in Mumbai, Kashmiri Pandits in Delhi and Jammu, adivasis dispossessed of land in all urban areas. No one asked Shah to explain how he proposes to look after their economic welfare and what benefits these supposedly persecuted people will bring to this country. For the moment, of course, there is the CAB and only the SC stands between it and a rude return to the horrors of Partition.