Experts unanimously agree FDs with banks, NBFCs must be 100% insured 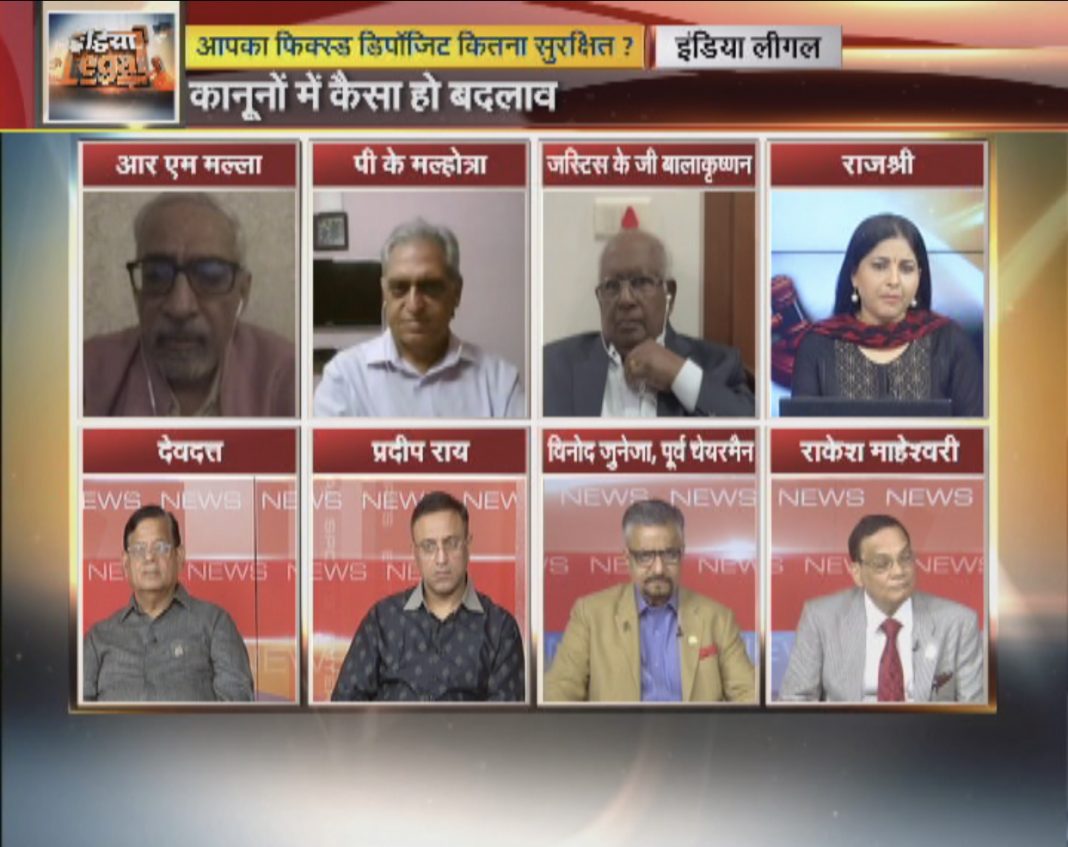 The Rs 5 lakh limit in the insurance provided for fixed deposits is definitely not enough, agree participants in India Legal’s Special Show on APN News Channel

“It is well enough that people of the nation do not understand our banking and monetary system, for if they did, I believe there would be a revolution before tomorrow morning.” ― Henry Ford

Discounting the hyperbole of this Henry Ford statement, it still can act as a foreboding for what may happen if the nickel drops about the sanctity of our fixed deposits.

The underbelly of the Indian banking system holds a public secret which few are aware of.

The harsh fact is that the money in the supposed impregnable bank fixed deposits is not fully safe. In fact they are insured for a mere Rs 5 lakhs. Any amount above this limit lies vulnerable and unsafe in the safe deposits of country’s banking system.

In case a bank goes bust, the hapless consumers are destined to be left high and dry. They can get only Rs 5 lakh of their fixed deposit back.

Early this year, on February 1, an innocuous policy announcement made by Finance Minister Nirmala Sitaraman held clue to the state of things and of the policy change effected in the matter.

In her budget speech the finance minister had proclaimed that the Deposit Insurance and Credit Guarantee Corporation or DICGC scheme, which provides an insurance cover for fixed deposits, has been raised to Rs 5 lakh.

This was the starting point of a campaign initiated by India Legal-APN and Public Police to secure insurance for the full fixed deposit amount of consumers. The campaign aims to include all banks, whether it is of public sector, private sector, cooperative bank or Non Banking Finance Companies.

Former Chief Justice of India KG Balakrishnan, the guiding light of this consumer movement, says: “People’s hard earned money should be fully secure. The government and the RBI should ensure this.”

Rakesh Maheshwari, a senior chartered accountant and CEO of Public Police seconds the former Chief Justice of India’s thoughts. He says: “In this phase where the government is universalizing bank accounts and stressing on digital banking, it should be incumbent on all banks and NBFC’s to properly and securely invest money. If the Supreme Court has made it mandatory for builders to tie up with secured creditors, why shouldn’t it be thus with banks?”

In fact, we are dealing with a systemic malady. Insecurity of bank deposits is a symptom of a deeper malaise. The need of the hour is accountability and transparency of banking operations.

Pradeep Rai, a senior advocate of the Supreme Court, holds: “The system is at fault. The premium is taken for the full amount, but the capital is not secured. We may be protecting 90 percent of the consumers whose fixed deposit runs up to Rs 5 lakh, but are neglecting the rest 10 percent who form a vital chunk and whose cash makes the wheel of the banking system roll. We need to challenge and change the policy.’’

The argument to fully secure fixed deposits rests on the premise of a robust and impregnable Deposit Insurance Fund (DIF). The DIF needs to be re-invested and this reinvestment has to be riskless and not dependent on market vagaries.

Justice Mukul Sherawat, a former judge of the NCLT, Mumbai, made a case for a fully secured Deposit Insurance Fund. He says: “DIF or any such fund created from fixed deposit premiums should only be invested in government bonds which provide sovereign guarantee, or guarantee by the Indian State.”

The website of Deposit Insurance and Credit Guarantee Corporation or DICGC clearly sets the agenda of the Corporation.

The preamble of the Deposit Insurance and Credit Guarantee Corporation Act, 1961 states that it is an Act to provide for the establishment of a Corporation for the purpose of insurance of deposits and guaranteeing of credit facilities and for other matters connected therewith or incidental thereto.

P K Malhotra, former law secretary of the Government of India, says: “The RBI is directly involved with the functioning of the DICGC and the DIF. It is the responsibility of the Apex Bank to back it up with sovereign guarantee. The RBI is the regulator of banking sector and it is its duty to ensure this.”

Financial health of a bank is also a direct function of fixed deposit security. If banks fail due to mismanagement and uncontrolled stress of Non Performing Assests ( NPA ).

Escalating NPAs require a bank to make higher provisions for losses in their books. As banks’ profitability declines, it makes them vulnerable to adverse economic shocks and consequently puts consumer deposits at risk.

Justice Mukul Sherawat, speaking from his experience at NCLT, says: “Banks should be aware of NPA. If a company is red-flagged why give him loan? Banking officials are adopting a lackadaisical approach. This shouldn’t happen. There is a need to strictly monitor the banks. Strong regulations are required. Quarterly reports won’t do.”

R.M. Malla , former chairman of IDBI bank, is quick to point out the strengths of the Indian banking system. “Banks were nationalized in 1969. Today is 2020. Fifty years have passed. No public sector bank has failed up till now. No depositor has lost his money. RBI supervision is strong. Individuals account should be fully insured.”

The Corporation has revised the premium to 12 paise per Rs 100 of assessable deposits per annum from the half-year beginning April 1, 2020 with the objective of maintaining a strong DIF.

The premium paid by the insured banks to the Corporation is required to be absorbed by the banks themselves so that the benefit of deposit insurance protection is made available to the depositors free of cost.

In other words, the financial burden on account of payment of premium should be borne by the banks themselves and should not be passed on to the depositors.

Vinod Juneja, former chairman of Bank of Rajasthan, suggests an alternate model. He says: “Create a separate  body only to take care of fixed deposits of Rs 5 lakh to Rs 50 lakh and above. The consumers for this segment may pay 13p to 14p per Rs 100 deposited. In this way the banks won’t be burdened as high end consumers will be paying their own insurance.”

Deo Datta, a former IAS officer, also contends: “Depositors’ interests should be safeguarded. Full amount insurance is needed. For overseeing this, make an independent regulatory authority if needed. In individuals’ case, full insurance should be done. If the RBI wants, it can create a public-private model or can convert a government body and make it a corporation with regulatory powers.”

However, Malhotra argues against numerous authorities. “Don’t create multiple bodies. It is better to have one authority and make it accountable. Multiplying bodies will only complicate things and will also make governance difficult.’’

NBFCs often offer a higher interest rate, when compared to bank fixed deposits, which enables investors to multiply their savings easily. However, these deposits are fraught with risks.

“Public Police aims for safety of fixed deposits across the bank spectrum, whether private or public. We want all fixed deposits in corporate, private banks and NBFCs to be 100 percent insured,” Rakesh Maheshwari affirms.

Building consumer trust is crucial to success for banks. The most important decision for consumers is who to trust with their money. When a consumer puts his hard earned money in a bank he has reposed his trust. By only partially underwriting his deposited money the bank breaches this trust.

“How can consumer rights be protected?” Pradeep Rai questions. “All public policy can be challenged and this is no exception. Consumers shouldn’t bear the brunt of wrong management decisions of the bank.”

As of now the consumer movement is building up. With increased public awareness about the insecurity of fixed deposits placed in banks, pressure will inevitably build upon government to do a course correction and ensure that the money and rights of bank consumers are protected.