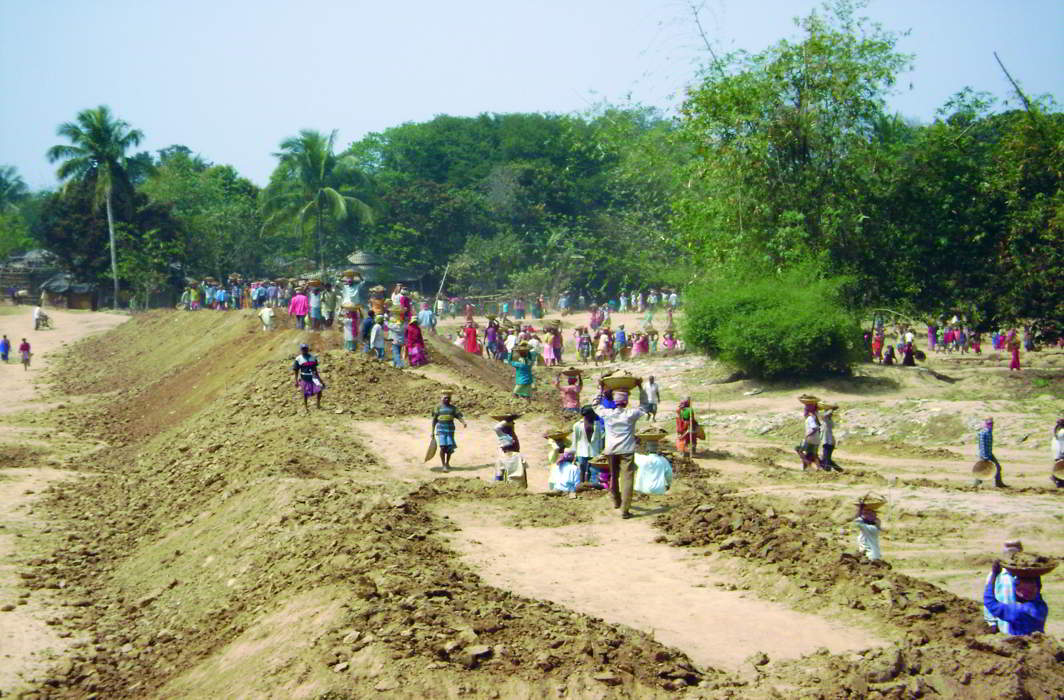 Above: MGNREGA workers in several states have been working at less than the minimum wages. Photo: nregapaschimmedinipur.com

Despite the apex court saying that minimum pay is a fundamental right, the centre has made no attempt to harmonise these with statutory minimum remuneration of agricultural labourers in states

Prime Minister Narendra Modi, his colleagues in the NDA government and the BJP never tire of reiterating their slogan, Sabka Saath, Sabka Vikas or of talking about Antyodaya, a doctrine which talks about the “rise of the last person”.

Yet, if draft recommendations of the Nagesh Singh Committee constituted by the ministry of rural development are anything to go by, it is evident that the government’s plank of working for the “last man” is confined to poll slogans. This Committee was constituted to look into harmonising minimum wages prescribed under the Mahatma Gandhi National Rural Employment Guarantee Act (MGNREGA) with statutory minimum wages of agricultural labourers in states.

While the Committee submitted its report to the centre in July 2017, the government has been steadfast in rejecting demands for making public the recommendations that were accepted. But there has also been no attempt by the government to deny or counter reports that have been carried in some sections of the media about the final outline of the Committee’s report. It seems that the final recommendations have endorsed the draft report’s view that “there is no compelling argument for convergence of minimum wages for agricultural labour and wages notified for MGNREGA workers”.

MGNREGA 2005 guarantees every rural household a minimum of 100 days of manual work per year at the notified wage rate. Much of the success of this Act depends on the rate at which workers are paid.

Schisms between MGNREGA and the issue of minimum wages have existed since the drafting of the legislation. The draft, as prepared by the National Advisory Council, stated that “in no circumstance shall labourers be paid less than the statutory minimum wage of agricultural labourers applicable in the State”. But the Bill that was finally passed by parliament included a “non-obstante” clause which stated that “notwithstanding anything contained in the Minimum Wages Act 1948, the Central Government may, by notification specify the wage rate for the purposes of this Act”. Also, Rs 60 per day was set as the floor MGNREGA wage.

In the initial years of MGNREGA, workers were paid the state minimum wage for agriculture or Rs 60, whichever was higher. However, in January 2009, the Ministry of Rural Development (MoRD) used Section 6(1) of the employment guarantee Act to delink MGNREGA from minimum wages. Also, the MGNREGA wage was frozen at a real value of Rs 100 at the December 2008 price level (states giving MGNREGA wages of a higher amount were allowed to maintain the wage levels).

This move was met with fierce opposition from activists, jurists and labour groups and the matter was taken to the Andhra Pradesh and Karnataka High Court. The Andhra Pradesh High Court suspended the January 2009 notification and the government was instructed to pay the state minimum wage. The central government maintained that the difference between the state minimum wage and the MGNREGA wage should be paid by the state government. States have refused to contribute towards the payment of wages as the Employment Guarantee Act clearly puts the entire financial burden of wages on the central government.

On September 23, 2011, the Karnataka High Court held that the Karnataka Minimum Wages Act prevailed over the Employment Guarantee Act and accordingly, instructed payment of minimum wages to MGNREGA workers. The centre challenged the High Court ruling on the grounds of fiscal constraints, but the Supreme Court refused to stay this judgment.

The judges also said: “The State cannot be permitted to take advantage of the helpless condition of the affected persons and extract labour or service from them on payment of less than the minimum wage.” Justices PN Bhagwati and RS Pathak based their judgment on a previous year’s ruling in People’s Union for Democratic Rights and Ors vs Union of India and Ors (1982), in which the Supreme Court included “compulsion arising from hunger and poverty, want and destitution” in the definition of “forced labour”.

In July 2009, the central government’s labour department put on record that workers cannot be paid less than the minimum wages. A year later, the Central Employment Guarantee Council’s Working Group on Wages also made an emergency recommendation of paying MGNREGA wages in accordance with the Minimum Wages Act and doing away with Section 6(1) of the employment guarantee Act. 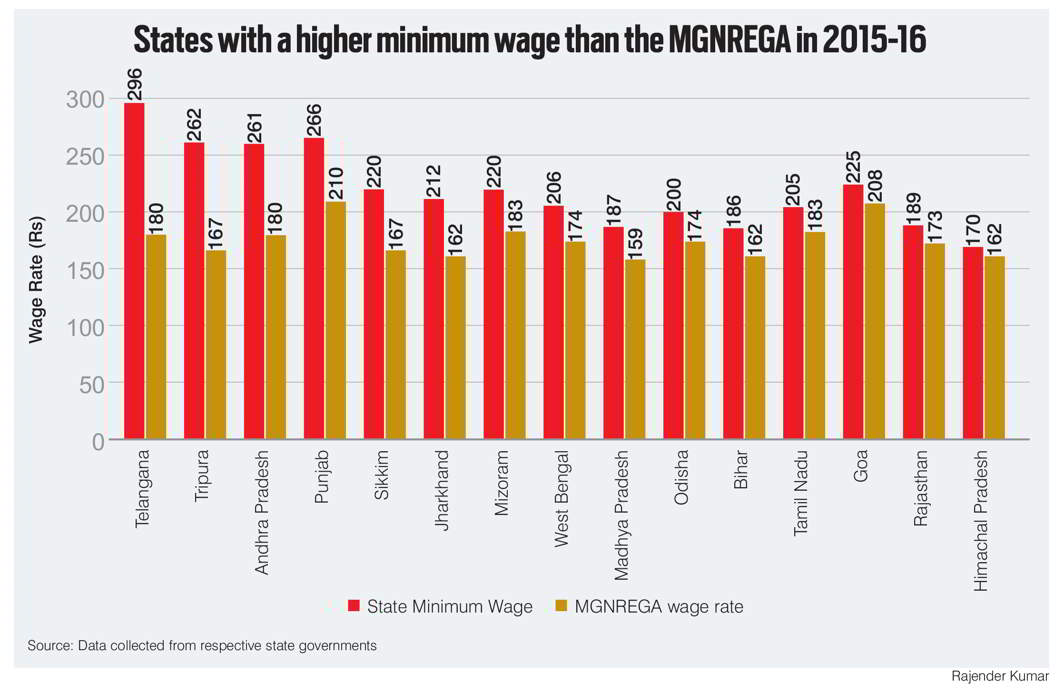 In 2013, MoRD constituted a committee under the chairmanship of Prof Mahendra Dev to look into the matter of MGNREGA wage revision. Two years later, the Committee recommended that “the baseline for MGNREGA wage indexation from 2014 may be the current minimum wage rate for unskilled agricultural labourers fixed by the states under the Minimum Wages Act or the current MGNREGA wage rate, whichever is higher”. The central government did not accept even the conservative recommendations of this committee and these were shot down by the finance ministry, as revealed in a Right to Information query.

Perhaps the most ludicrous justification cited by the Committee for not adhering to the Minimum Wages Act is the failure of the government to enforce minimum agricultural wages, especially for women. The Committee seems to imply that the gender equality in payment of MGNREGA wages compensates for not paying the minimum wage under the Employment Guarantee Act. 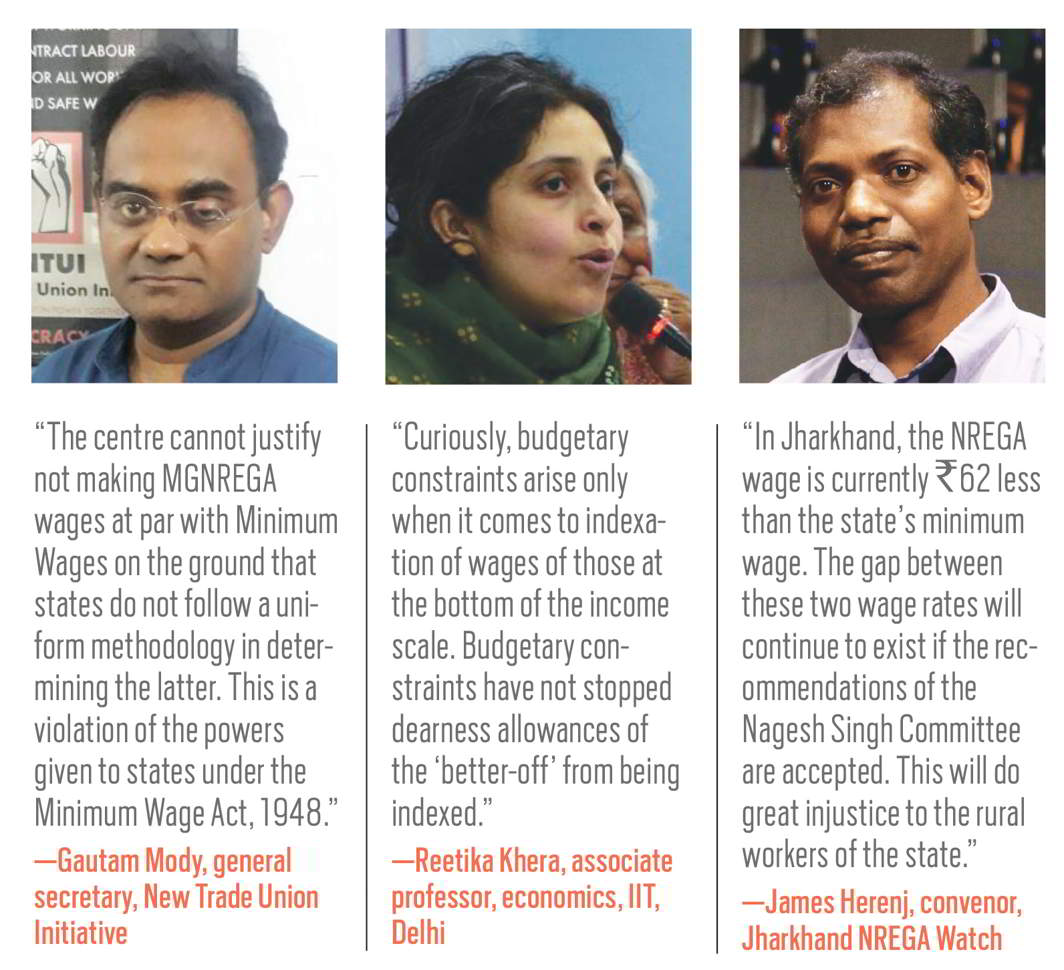 The delinking of MGNREGA with minimum wages has not only led to a serious breach of law, but has also severely undermined the ability of the Employment Guarantee Act to provide some economic relief to rural households. MGNREGA workers have been victims of immense injustice for almost a decade now. They have had to work at stagnating real (at times even nominal) wages, suffer chronic delays and face routine violations of their other legal entitlements under the Act.

The appointment of the Nagesh Singh Committee after rejecting the modest recommendations of the Mahendra Dev Committee for no apparent reason was a clear signal from the ministry of its lack of intent to determine a fair and constitutionally valid wage for MGNREGA workers.

It is hard not to conclude that the NDA government led by Prime Minister Modi wants to weaken MGNREGA to the point that workers themselves decide to reject this programme for its failure to provide any economic support worth toiling seven hours daily.

The writer is co-convener of NREGA Sangharsh Morcha