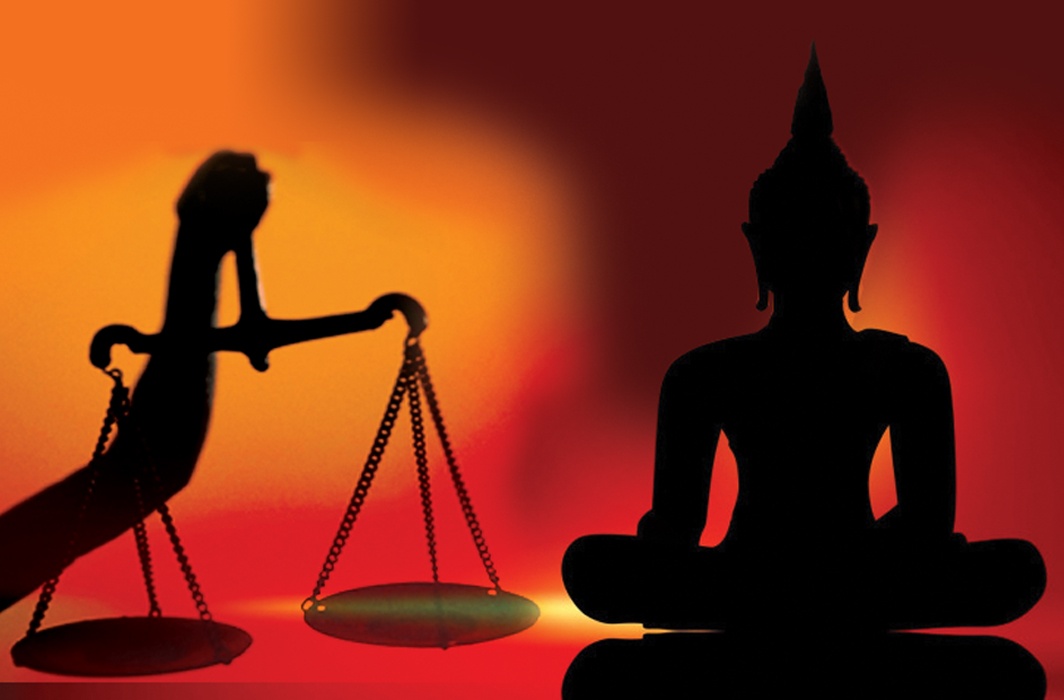 The religion’s principles have influenced the legal system and the Constitution. Its values of non-violence, compassion and social equality are reflected in judgments and have stood the test of time

Indian jurisprudence has had a long history and been influenced by many principles and religions, be it Hinduism, Buddhism, Islam or common law. And Buddhism with its virtues of self-control, impartiality, truthfulness and goodness has had an over-riding influence on the Indian legal system. Many of its messages connect with the principles of the Constitution and have been quoted in the Supreme Court.

The origin of law in India began with the Indus Valley Civilisation in western Punjab. This civilisation was highly organised and secular. The trading, pottery, drainage system and civic structure of that time had the least discrimination and are still praised worldwide. Then came the Aryans with their own set of rules and regulations. Arya dharma was not merely a religion, but comprised of laws, moral codes, righteousness and justice and was equally applicable to all Vedic and non-Vedic faiths.

Similarly, Vedic dharma signified philosophies and moral teachings from the Vedas. The Upanishads further enhanced the development of intellectuality and were philosophical and based on rational thoughts. Dharmashastra and Arthashastra were important treatises emanating from the Vedas, the Upanishads and other religious texts and enriched by practitioners from different Hindu philosophical schools.

In ancient India, there were instances of some kind of legal system being followed. Even the king was bound by a strict ethical and legal code, known as Raj Dharma. The Law of Manuscripts refers to the beginning of a partnership in business with its central philosophy being “tolerance and pluralism”.

Coming to Buddhism, its influence on the Indian legal system has been all-pervasive. Buddhism began in the sixth century BC as an alternative to various practices prevailing at that time. After the demise of Lord Buddha around the fifth century BC, Buddhism preached that “nothing is permanent and change is the only constant”. The path to enlightenment is the practice of morality, mediation and wisdom. Buddhism appealed to logic and reasoning. Two thoughts of Buddhism—Theravada and Mahayana—are the most popular ones.

Buddhism adopted four noble truths—suffering, reason/cause, solution and the way to do it. Those who end this suffering achieve nirvana. Further, Lord Buddha followed an eight-fold path known as the Aryan eight-fold path—right beliefs, right aspirations, right speech, right conduct, right mode of livelihood, right effort, right-mindedness and right rapture. These paths and four noble truths are the principles which we broadly find in any evolved legal system.

Buddhism like other religions is based on the principle of universal love and compassion for all living beings. Buddha gave his teachings “for the good of the many, for the happiness of the many, out of compassion for the World”. The Preamble of India’s Constitution speaks of similar values—common good, equality and social harmony of everyone. So progressive was Buddha’s teachings that they have stood the test of time.

One of the greatest followers of Buddha in ancient India was King Ashoka. The inscriptions on Ashoka Pillars speak about “True Dhamma” based on the virtues of self-control, impartiality, truthfulness and goodness. He even had “Dhamma Officers”. In one of his major rock edicts, No 12, there is a deep message which connects to the principles of the Constitution. Justice Rohinton Nariman of the Supreme Court even referred to it in one of his lectures as it speaks of brotherhood.

Rock Edict No 12 says: “The Beloved of the Gods, the king Piyadassi, honours all sects and both ascetics and laymen, with gifts and various forms of recognition. But the Beloved of the Gods do not consider gifts or honour to be as important as the advancement of the essential doctrine of all sects. This progress of the essential doctrine takes many forms, but its basis is the control of one’s speech, so as not to extol one’s own sect or disparage another’s on unsuitable occasions, or at least to do so only mildly on certain occasions. On each occasion, one should honour another man’s sect, for by doing so one increases the influence of one’s own sect and benefits that of the other man…. This is the desire of the Beloved of the Gods, that all sects should be well-informed, and should teach that which is good….”

In fact, Ashoka showed sincere concern for fairness in justice and tolerance pertaining to imposition of sentences and wilfully pardoning prisoners. Pillar edict No 4 stated: “But it is desirable that there should be uniformity in judicial procedure and punishment.” The rights of prisoners were also protected just as in the Constitution. The Supreme Court has given various rulings on the rights of prisoners such as in Hussainara Khatoon v State of Bihar and DK Basu v State of West Bengal.

Interestingly, one of the chief architects of the Constitution, Dr BR Ambedkar, followed Buddhism by not glorifying the caste system but relying on logic and reasoning. Buddha strictly opposed the caste system and promoted an egalitarian society. The common method of living was very democratic in nature. Pandit Jawaharlal Nehru in The Discovery of India quoted what the Marquess of Zetland referred to as democracy in Buddhist Assemblies: “And it may come as a surprise to many to learn that in the Assemblies of the Buddhist in India 2000 or more years ago are to be found the rudiments of our own parliamentary practice of the present day. The dignity of the Assembly was preserved by the appointment of a special officer. A second officer was appointed whose duty it was to see that when necessary a quorum was secured. A member initiating business did so in the form of a motion which was then open to discussion. In some cases this was done once only, in others three times, thus anticipating the practice of parliament in requiring that a Bill be read a third time before it becomes law. If discussion disclosed a difference of opinion the matter was decided by the vote of the majority, the voting being by ballot.”

Similarly, Buddha propagated that no absolute authority vested in one person. Rules for Buddhist monks are regulated by Vinaya Texts, which prescribe the methods to judge and punish them. The Patimokkha Texts propagate a list of monastic rules, which are applicable even today. It is believed that no living creature should be deprived of the right to life. Killing of animals was prohibited and the importance of animal rights is recognised in the present legal system too. Killing of some animals is a serious punishable offence. The first part of Patimokkha deals with the four gravest sins—sexual intercourse, theft, murder and demonstration of one’s miraculous powers—and is punishable.

Further, Buddhism also follows rules for settling a conflict after admitting a crime and by majority decision. In case of an insane accused, it is settled through a declaration by the Sangha (a sort of court) that he be absolved of the offence. Moreover, if a monk commits an offence, he should willingly undergo the appropriate penalty in line with the seriousness of his offence. So the principle was punishment proportionate to the magnitude of the crime, which is a well-recognised principle in our Law of Crimes.

For grant of acquittal to an accused, there were five conditions to be satisfied. Firstly, the monk must be innocent, others must have censured him, he must plead innocence, the Sangha should grant it and the Sangha must be duly held and constituted. We find elements of fair trials, impartial juries and right to hearing, which are also principles of natural justice, relevant to the present-day legal system.

Alternative Dispute Resolution has emerged now as one of the important tools to settle disputes. Mediation was a practice influenced by the principle of madhyam marg in Buddhism. Buddha also considered freedom of speech as a valuable right irrespective of any class or domination. There was freedom of speech without partiality to debate on disputed matters among the monks. And the Constitution too guarantees freedom of speech and expression. Abolition of capital punishment, a topic often discussed today, also stems from Buddha. He considered all forms of life sacred and it is implicit he was never in favour of capital punishment. The principle of recognition of all forms of life and liberty which is there in Buddhism is in consonance with Article 21 of the Constitution. Opposition to the caste system is in consonance with Article 14.

Buddhism’s progressive thoughts, be it opposing the caste system, principles of non-violence, compassion, fraternity of all, respect for animal life, recognition of all forms of life, democracy and social equality are followed even today. Therefore, the rise of Buddism was regarded as an era of great social change.

Though in the present scenario, the core principles of Buddhism (reclusiveness) are tough to practise, its moral teachings can equate to legal principles. Internationally, there are various countries which were and continue to be influenced by Buddhism and have adapted some of its principles into their legal system. These include Thailand, Bhutan, Tibet, Vietnam and Sri Lanka.

The guiding principles of Buddhism can play a significant role in this era of chaos and distrust. Hatred can only be battled with compassion, lies with truth and discrimination with respect and equality for all. Buddha said: “Three things cannot be long hidden: the sun, the moon and the truth.”

—The writer is Advocate-on-Record in the Supreme Court