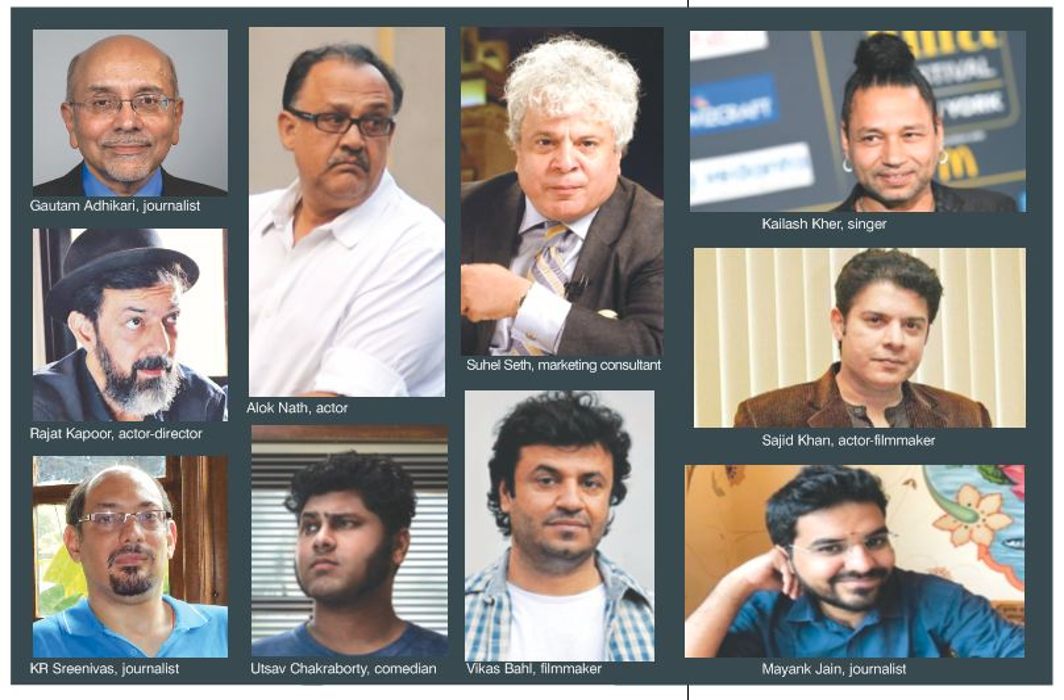 The worlds of journalism, entertainment and politics are in turmoil as a list of prominent editors, actors, influencers and politicians are exposed by those in the vanguard of the #MeToo revolution

Long before the current #MeToo movement arrived in India with a bang, Rupan Deol Bajaj, an IAS officer, outed her boss, the legendary KPS Gill for putting his hand where he shouldn’t have. Since then, the Vishakha guidelines have seen Tehelka editor Tarun Tejpal and environment guru RK Pachauri facing court cases for sexual misconduct, but it took former actress Tanushree Dutta to unleash the force of the international #MeToo movement in India. Her naming of Vivek Agnihotri and Nana Patekar was the trigger for an avalanche of sordid stories about sexual harassment at work. In the space of three days, scores of women used social media to name and shame prominent powerful people, starting with the former celebrity editor and Minister of State in the Modi government, MJ Akbar.  Starting with the gutsy Priya Ramani, at least seven women journalists who worked under him have shown great courage in reliving painful memories of how they were treated, or mistreated. While Akbar and the Bollywood celebrities made the headlines, the real purge was taking place in newsrooms across the country.

Top heads have rolled. Hindustan Times‘ bureau chief Prashant Jha has stepped down in the face of allegations by Avantika Mehta and The Times Of India Hyderabad editor KR Sreenivas sent on administrative leave following a petition by seven women with Sandhya Menon leading the charge. Former TOI executive editor and editor-in-chief, DNA, Gautam Adhikari, too, has just resigned from the think-tank, Center for American Progress, based in Washington, DC. He had been accused by Menon, Sonora Jha and Tara Kaushal of lewd behaviour. Manoj Ramachandran, associate editor with HT in New Delhi, is another person who has to answer to Menon. As must HT’s Dhrubo Jyoti to several of his colleagues who have had to suffer his interactions. Celebrity marketing consultant Suhel Seth is also facing accusations from three women, including an Indian Express journalist.

All this takes place at the same time as financial daily Business Standard initiates an inquiry into accusations against its principal correspondent, Mayank Jain, by freelancer Anoo Bhuyan of making persistent, unwelcome sexual advances. Jain has since resigned. HuffPost’s Anurag Verma is in trouble for his Snapchats and “memes” but has apologised. So has The Quint senior correspondent Meghnad Bose. But saying sorry did not wash for All India Bakchod’s Utsav Chakraborty whose online show, On Air with AIB, was cancelled by digital entertainment platform Hotstar, and whose misadventures have triggered a breakup of the group. Tanmay Bhat and Gurusimran Khamba are stepping away from it after Khamba, too, was directly accused of sexual harassment. Bhat faced flak for sitting on the plaint. Creative writers accused of harassing women include Chetan Bhagat and Kiran Nagarkar; the former has apologised, the latter hasn’t.

Indeed, skeletons are tumbling out of the proverbial closet with each passing day and the avalanche is unlikely to stop anytime soon. Emboldened by western, and global, precedence, the Twitter-empowered Network has finally struck back. It is exactly a year after The New York Times published its Harvey Weinstein investigation. The crucial difference seems to be that, 10 or 20 years ago, many of the complaints were not acted upon and the victim herself received backlash for taking on the powerful and the Old Boys’ Club. Owing to the lack of a concerted campaign, such stories of sexual harassment and abuse went unreported. Take, for instance, the case of a Newslaundry reporter who in 2007 wrote to her editor-in-chief about her supervisor’s coercive overtures but her complaint was dismissed and she was offered a transfer. In 2009, journalist Padma Priya D reported harassment at The Hindu to her editor, N Ram. She was sent on leave and subsequently told to quit. In 2014, Chameli Devi Jain Awardee Raksha Kumar wrote a rivetting piece also in The Hindu about her spiritual sojourn post her unsavoury encounter with Aayush Soni but stopped short of naming him. She did so a few days back after a young freelancer told her how she, too, had been at the receiving end of Soni’s moves. Soni has since apologised to Kumar, but is yet to respond to complaints by two other women. But the bravest of the early complainants is Nasreen Khan whose professional harassment at the hands of her former boss, Satadru Ojha, at Calcutta Times began in 2013, quickly took on a sexist veneer, and continued until she was sacked by Bennett Coleman and Company Limited for a false story published under her name while she was away. Ojha continues safely in his job. Khan has since become a lawyer after having had to quit media. 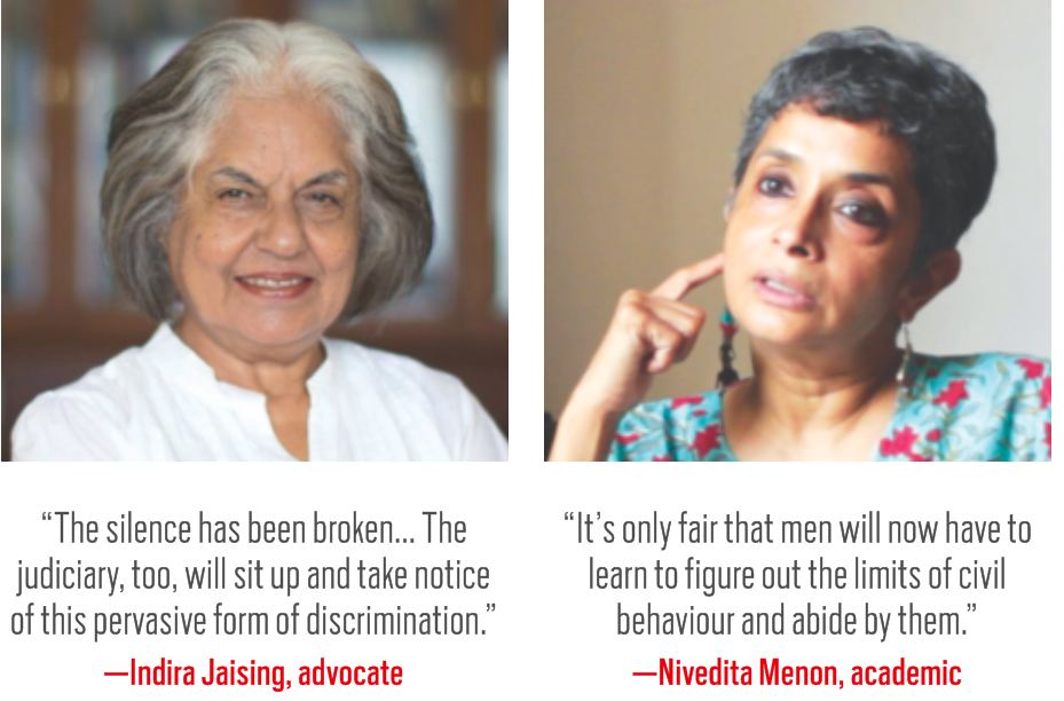 Still, it seems it’s #TimesUp across the spectrum and in all professions and the roll call is only getting louder. In Bollywood, a young woman’s account of being masturbated at by Vikas Bahl at a party has led to the dissolution of the redoubtable filmmakers’ collective, Phantom Films. Bahl is even said to have made unwanted passes at Kangana Ranaut, as the outspoken actress has averred. Writer-producer-director Vinta Nanda has accused “Bollywood’s favourite babuji”, Alok Nath, of rape when she was working with him in the Nineties TV show, Tara. Nath also allegedly harassed actress Navneet Nishan on the show, but Nanda’s tweet has shocked the industry. It has been followed by actress Sandhya Mridul’s allegation of indecent conduct against Nath. Rajat Kapoor, too, has been accused of behaving inappropriately with three women in three different incidents. He had to express regret. Sajid Khan and Subhash Ghai are the latest Bollywood bigwigs to have been named, with Khan’s sister, Farah, expressing solidarity with victims. Playback singer Chinmayi Sripaada has accused lyricist Vairamuthu of intimidating her while hitting on her years ago. Kailash Kher and Anu Malik face accusations from fellow singer Sona Mohapatra and a female journalist.  Music director Gopi Sundar, too, faces accusations.

The storm, it seems, has now travelled to the Indian National Congress’ IT cell. A woman has accused Chirag Patnaik of breaching her personal space. Divya Spandana has been accused of doing the aiding and abetting. Patnaik has finally been arrested. Kumar, in her 2014 piece, wrote compellingly about women who “see virtue in hiding abuse”, and tweeted that “it is not men versus women, but us versus a system in which we are all complicit”. Meanwhile, actor-turned-CPI(M) MLA Mukesh is also facing heat from Tess Joseph, a Mumbai-based casting director. 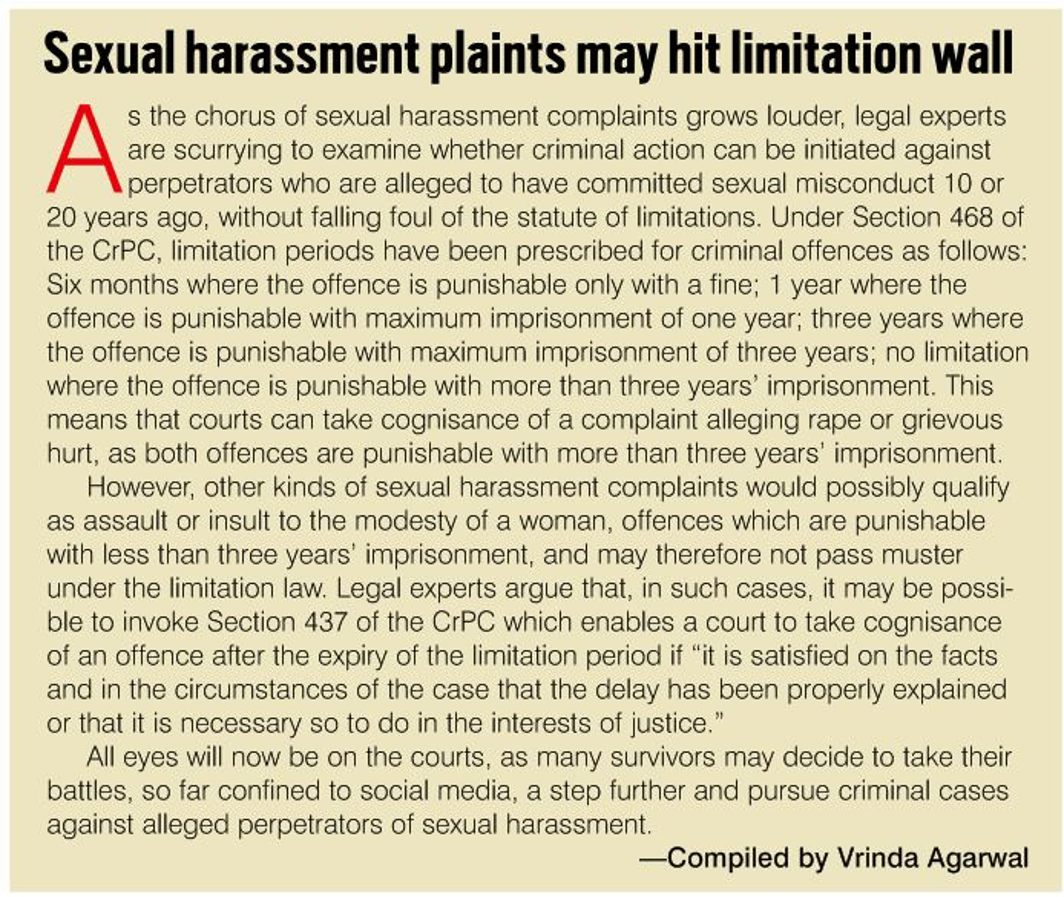 The tables have turned. As academic and feminist scholar Nivedita Menon tells India Legal: “It’s only fair that men will now have to learn to figure out the limits of civil behaviour and stay within these boundaries when earlier it was us women who would be put through worry or worse, character assassination, for politely smiling at someone. Now they will get a taste of their own medicine, or rather the medicine that women have been served up until now by society and in the serving of which men have had a hand.” It is a reference to a meta-paranoia, paranoia about paranoia, some men have been complaining of, saying these developments would make them afraid to interact with their colleagues. However, as well-known Supreme Court advocate Indira Jaising told India Legal. “The silence has been broken. Men have been put on notice that such behaviour is not acceptable. Now, institutions and offices will also be put on notice that they are liable for the misconduct of their students and staff. The judiciary, too, will sit up and take notice of this pervasive form of discrimination.”

For many in the media and other professions swept by #MeToo, this has been an occasion for plain old Schadenfreude. For those with bad karma, however, the fear and anxiety are very real. The catch is that this second group numbers many more than one had previously reckoned. For Indian society, meanwhile, perhaps a time for healing has just begun. As the saying goes, jab jaago, tab savera (whenever you wake up, your day starts).