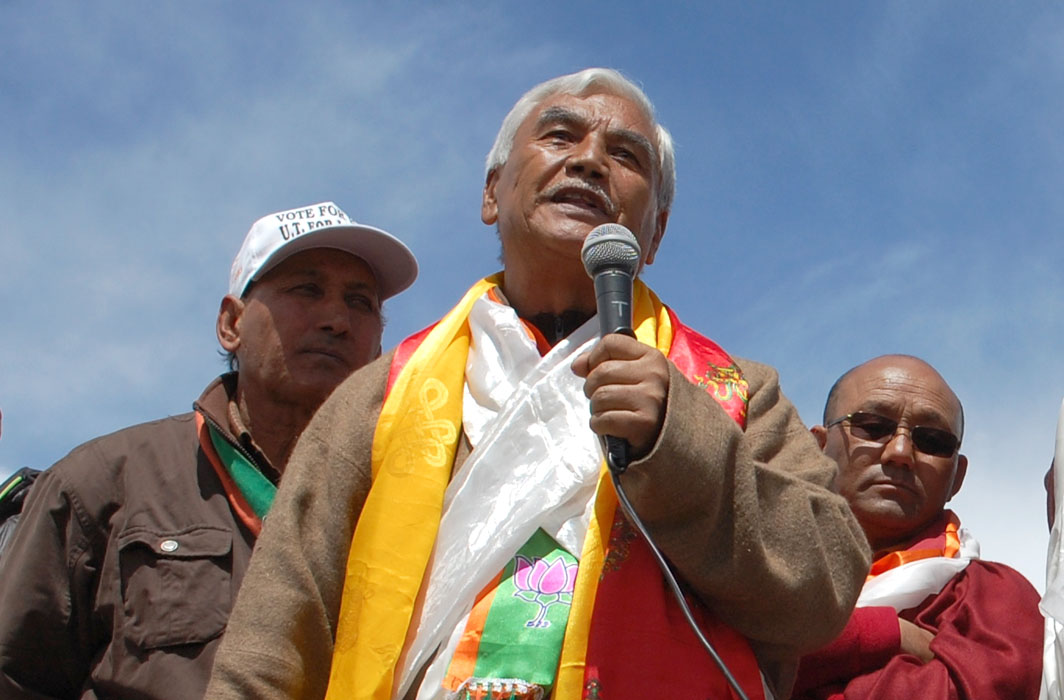 With Lok Sabha Speaker Sumitra Mahajan accepting the resignation of Thupstan Chhewang, a formidable leader of Ladakh in Jammu and Kashmir, from the House on December 13 — almost a month after it was submitted — politics in the region across the mighty Himalayas is set to hot up.

Evidently all efforts by the Bharatiya Janata Party (BJP) and Rashtriya Swayamsevak Sangh (RSS) leaders to woo Thupstan back to the party fold came a cropper. He stuck to his stand resigning from the party and the Lok Sabha in protest against the failure of the central leadership to keep its promises and J&K leadership’s unwise decisions about the area.

Ladakh, a distinct geographical entity, consists of two districts and the spotlight currently is on one of them Leh district, to which Thupstan belongs. Thupstan had won the Ladakh parliamentary constituency for the BJP for the first time in 2014 and Prime Minister Narendra Modi, spearheading the party campaign, had gone around describing it as a singular success. For Thupstan personally, it was second victory having won the seat for the first time in 2004 as a Ladakh Union Territory Front (LUTF) nominee.

Leh, despite its small population of 133487 (2011 census) in a vast area of 45110 square kilometres making it the second largest district in the country after Kutch (Gujarat), is strategically important as two none-too-friendly neighbours China and Pakistan are next door and have occupied a significant chuck of it and Kargil district.

In view of its sensitive location, the need has always been felt for having an effective local political dispensation. The main demand of Leh district in particular is a union territory status.Geographically a barren land by and large Leh is a fertile ground of political deas.

Recent Magsaysay award winner Sonam Wangchuk, innovator and environmentalist, belongs to the district, and had floated a political outfit called the New Ladakh Movement (NLM) to “put Ladakh back on the path of self-reliance, selflessness and dignity and for this we want to focus on improving our education, economy and ecology.”

His party attracted a section of educated youth but did not achieve any breakthrough but is considered to have again become relevant in the developing scenario.

According to one of his close associates Tsewang Rigzin, an activist and commentator, Leh may be moving towards “an era dominated by local parties” in the wake of the resignation of Thupstan recalling that the NLM had contested the 2015 Ladakh Autonomous Hill Development Council, a local self-governing body, elections in 2015. His view is that “in the absence of its main architect in Ladakh, BJP (Leh) has reasons to worry.” He thinks that the other political parties would have also reasons to worry if Thupstan, “once the undisputed political leader in Leh,” takes a fresh public position. Rigzin also sees the possibility of the revival of the LUTF, now that the “BJP and Congress have failed to deliver.” The LUTF was a common platform of all political parties which had merged their identities for its formation and as whose nominee Thupstan had first entered the Lok Sabha,

It was formed in 2002 and turned out to be a short-lived experiment as the Congress broke away causing an irreparable division. The BJP actually benefitted from the split and wooed Thupstan and another senior leader Tsering Dorway into its fold to become as reckonable force as the Congress has been in the region.

Basking in the glory of one of Asia’s biggest honours bestowed upon him Sonam Wangchuk, whose education experiment is widely believed to have inspired Aamir Khan’s famous movie “3 idiots”, himself has not spoken his mind yet.

Thupstan too has not revealed his further plans so far.

Another theory to serve the region’s collective interests has been revived by Phunchok Stobdan, a well-known security analyst and former Indian ambassador to Kyrgyzstan,  He has suggested the formation of “a local political platform under the rubric Ladakh Rangyul or simply the Rangyul” (meaning Fatherland, a person’s native land) to attain, among others, the following objectives:  “political expression and outlook for Ladakh to be able to uphold its identity and interest first”; “the  removal of prolonged political neglect of Ladakh by putting the key issues on the forefront of national attention” “ changing the political status quo of Ladakh within the Indian Constitution” and exploiting “the full political potentials and economic interests of Ladakh.”

Stobdan too belongs to Leh.

In sharp contrast Kargil district remains aloof to the political thoughts being floated around in Leh. Predominantly Shia majority many of its leaders and intellectuals have not hidden their jubilation over Thupstan breaking away from the BJP. That can’t be interpreted, however, as their support to any proposal emanating from the adjoining district. In any event the majority of them don’t back the demand for UT. In fact, they are unhappy that a section of the Leh leadership has opposed the construction of the Zojila Tunnel that would remove the present irritants in their link with Srinagar and the rest of the country.

On the whole, one can notice the excitement building up in the two districts in the run-up to the 2019 polls.  Whatever their differences together they constitute the same parliamentary constituency.