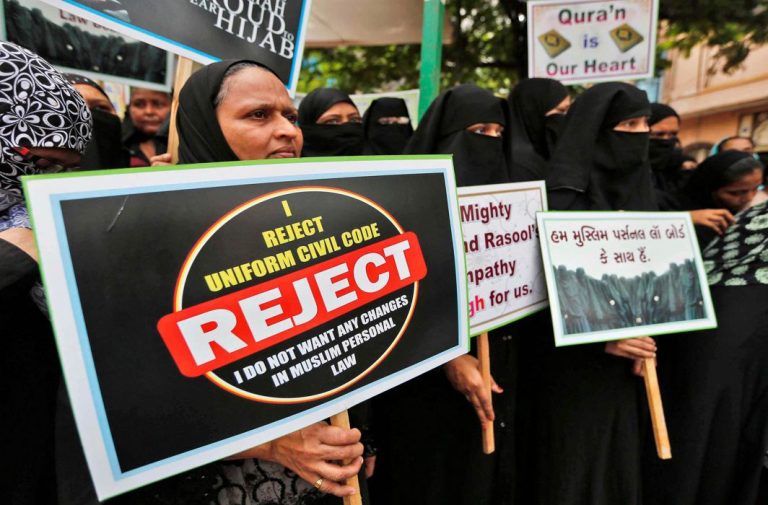 Stating there are hindrances to any endeavours to institute a uniform civil code, Law Commission favours reforms within existing personal and marriage laws

On the last day of its term, the current Law Commission, headed by Justice (retired) BS Chauhan, dealt a massive blow to prime minister narendra modi and his BJP’s decades old poll plank of implementing a Uniform Civil Code (UCC), stating that such a code is “neither necessary nor desirable at this stage”.

The Commission has, however, in its consultative paper on ‘reform of family law’, suggested a slew of reforms in existing personal and marriage laws.

Here are the salient features of the consultative paper, released on Friday (August 31), as Justice (retd) Chauhan’s stint as the Law Commission chief came to an end.

On Adultery, the Commission has noted:

“While all family laws include adultery as a ground for divorce it is important to ensure that the provision is accessible to both spouses.”

“By presuming, that only women can be victims, the law takes a patronising attitude towards women. The prosecution under section 497 entirely contingent on the husband’s word to the extent that a woman can practically enter into an adulterous relationship upon her husband‘s consent, thereby reducing her to a commodity of a man.”

“The Commission was assigned the task of undertaking a study on the provision of adultery within its report. As the judgment of the Constitution Bench in Joseph Shine v. Union of India is awaited, (hearing stood concluded) it is not appropriate for the Commission to make any suggestion in this regard at this stage but it urges a consideration about the utility or the lack there of, of a provision such as 497 IPC.”

On Age of Consent for Marriage, the report says:

“A uniform age of consent between all citizens of marriage warrants a separate conversation from a discussion about prevention of child marriages for the simple reason that maintaining the difference of 18 years for girls and 21 years for boys simply contributes to the stereotype that wives must be younger than their husbands.”

“If a universal age for majority is recognised, and that grants all citizens the right to choose their governments, surely, they must then be also considered capable of choosing their spouses. For equality in the true sense, the insistence on recognising different ages of marriage between consenting adults must be abolished. The age of majority must be recognised uniformly as the legal age for marriage for men and women alike.”

On Grounds For Divorce, the report notes:

“Encouraging a simplified procedure for divorce is imperative for sustaining a healthy perception of marriage which is free of any discrimination or violence. Simplifying the procedure for couples where no reconciliation is possible would also be beneficial in curbing the false allegations against parties, which are often made in order to hasten the process of divorce. Lengthy procedures incentivise the use of severe grounds such as cruelty and adultery rather in order to secure a divorce which may have been prompted merely by inability of the partners to find mental, emotional or physical compatibility.”

“The practice of triple talaq which finds no anchor in Islamic jurisprudence and is permitted only within a limited sect of Hanafi school of Sunni Muslims, is not a part of Sharia and therefore is arbitrary. The section 2 of the Muslim Personal Law (Shariat) Application Act, 1937 through which the power and procedure for dissolution of marriage by triple talaq is said to be derived, is declared void (only to the extent that procedure is arbitrary). Once this is struck down the arbitrariness of this procedure ceases to be a part of personal law and therefore does not qualify for protection under the fundamental rights guaranteed under Articles 25-28 of the Constitution.”

“The issue of family law reform does not need to be approached as a policy that is against the religious sensibilities of individuals but simply as one promoting harmony between religion and constitutionalism, in a way that no citizen is left disadvantaged on account of their religion and at the same time every citizen’s right to freedom of religion is equally protected.”

“Although polygamy is permitted within Islam, it is a rare practice among Indian Muslims, on the other hand it is frequently misused by persons of other religions who convert as Muslims solely for the purpose of solemnising another marriage rather than Muslim themselves.”

“The Nikahnama itself should make it clear that polygamy is a criminal offence… This is not recommended owing to merely a moral position on bigamy, or to glorify monogamy, but emanates from the fact that only a man is permitted multiple wives which is unfair. Since the matter is sub judice before the Supreme Court, the Commission reserves its recommendation.”

“One of the major problems highlighted in the series of consultations held by the Commission was that the 30-day notice period after the registration of marriage under the Act is often misused. The 30-days period offers an opportunity to kin of the couple to discourage an inter-caste or an inter-religion marriage.”

“It is of paramount importance in the current scenario that couples opting into cross-community marriages are adequately protected.”

“The Commission urges a reduction of this (30-day) period to bring the procedure in line with all other personal laws, where registration of under Hindu Marriage Act,1955 can be attained in a day and signing of a Nikahnama also confers the status of husband and wife on the couple immediately.”

“Steps for the protection of the couples can be taken, if there is reasonable apprehension of threat to their life or liberty, and the couple request for the same. Thus, the requirement of a thirty days notice period from sections 5, 6, 7, and 16 needs to be either deleted or adequate protections for the couple need to be in place. All other general amendments such as introduction of irretrievable marriage as ground for divorce and community of property discussed earlier must also be incorporated in the SMA,1954.”