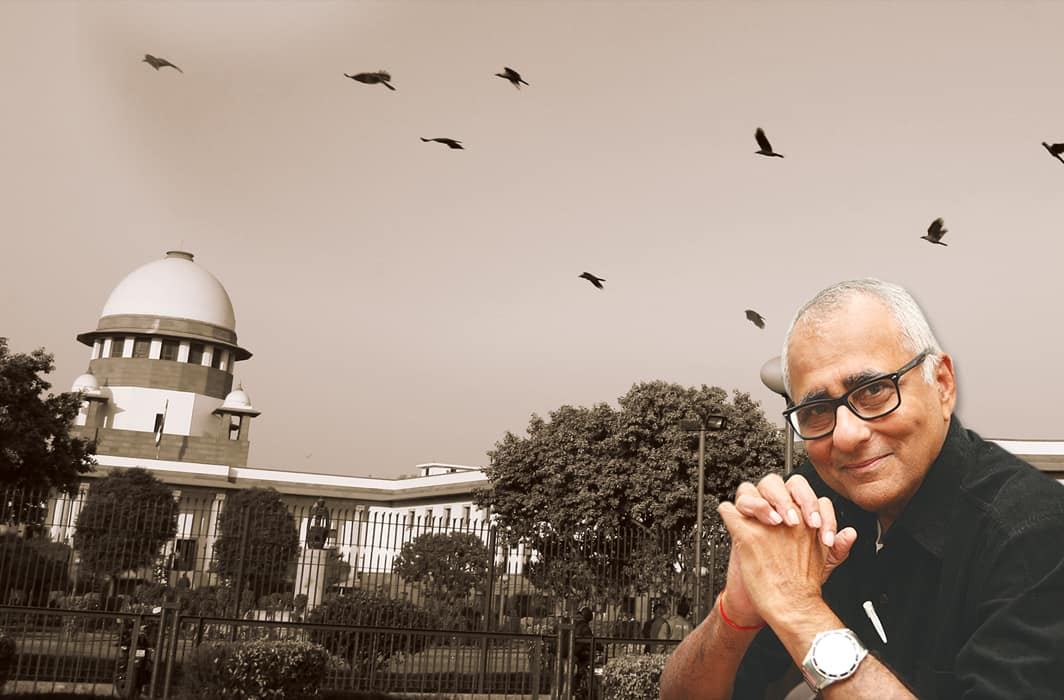 India Legal magazine, ever since its inception, has never been a bandwagon jumper. We do not leap blindly into taking positions on national issues just because other publications and the electronic media, political leaders and intellectuals are speaking in the same voice. We do not follow the brand of investigative journalism in which a newspaper or magazine first targets an editorially agreed upon individual or an institution, pursues its quarry for several months and then lets loose a barrage at an opportune moment, using the time spent on the story to solicit advertising and revenue support from vested interests seeking either protection from the hunt or having an interest in the outcome.

We do not follow the leader, so to speak. But we do follow the cardinal tenet on which India Legal was founded. We protect, perhaps overprotect, the judiciary for reasons I will state below. And they remain unchanged since the time they were articulated in this very space and in the very same language several years ago. Despite being armed with what looks like draconian powers of punishment and deterrence, judges are actually more vulnerable than other arms of the state to criticism, abuse and slander.

When politicians, mafia lords, big businessmen, entertainment stars, labour chieftains and journalists come under attack, they can use the social media, state machinery, CBI, Enforcement Directorate, muscle, guns, mass demonstrations and blackmail to hit back. A Supreme Court judge can use none of these weapons. He cannot respond in an op-ed piece. He cannot put his name in a Twitter feed. His only real power is contempt procedures or using courtroom proceedings to order the state to take action, or reprimand the lower courts—but these too are subject to challenge and appeal and often the appeal gets more news space than does the order.

The strongest defence the judge has is not to make himself vulnerable and to exercise his powers not in his own defence but rather in the defence of the Republic whose Constitution he is sworn to defend. And this includes not giving too much rope to swashbuckling lawyers who may become media stars and imagine themselves larger than the courts whom they are sworn to assist in coming to good judgments, indeed become larger than life itself. And they are not above using the influence of legal lobbies like bar associations to put judges on the backfoot.

The ugly truth here is that the Supreme Court over the years, by entertaining petitions and public interest litigation suits of all sorts, and giving them primacy and expedited hearings despite growing backlogs involving common people, has created its own Frankensteins. Without going into the merits of the defamation case against lawyer Prashant Bhushan which is now competing for headline space with the coronavirus, I am constrained to observe that many legal scholars do not see Bhushan as an angel of liberty. Several view him as an ambitious egotist who has used the PIL as a weapon to enhance his own political agenda. He is, unfortunately, a creation of the Supreme Court itself. He has now become, I repeat, their Frankenstein and his actions result in strengthening the hands of the very forces which would like to see a weak and emasculated Court, run not autonomously, but by and for the political and Fat Cat classes.

I think the Supreme Court made a tactical error in helping to elevate two tweets by the senior lawyer—by acting with such panic to try and punish him—into a world headline grabber. It should have ignored him. It was the judges’ action that sent a message to the world that a couple of tweets can shake the majesty of the Indian Supreme Court. There was plenty of public space in which the matters mentioned in the tweets could be discussed—a letter to the President; a letter to the chief justice; an appeal to some former chief justices who are considered the icons of public probity; various respectable discussion platforms.

But a cursory tweet is an indignity. It gives moral firepower to those hell-bent on preventing an independent judiciary from functioning because it taints all judges with the same brush. I harken back now to the famous January 2018 press conference by four of the senior-most judges of the Supreme Court—the very Collegium itself—on the sprawling front lawn of Justice Jasti Chelameswar’s residence, during which Chief Justice Dipak Misra was savaged. If it looked like a dizzying display of free speech in a democracy, well, think again.

What it amounted to was a mutiny that could well have sunk the Bounty—the ship of state that holds aloft some of the worthiest principles of the Constitution enshrining this Republic’s freedoms and liberties. The Executive branch must have been laughing all the way to the bank! For years, there have been attempts to emasculate the Judiciary as the Executive tried its damnedest to harness powers not  bequeathed to it by the Constitution. Indira Gandhi tried, but barely succeeded during the Emergency. The balance was restored by a series of measures which guaranteed safeguarding the “basic structure” of India’s secular Constitution and Fundamental Rights.

The Supreme Court judges had disagreements, they wrote dissenting opinions, they participated in seminars critical of judicial delays, appointment procedures, the bureaucratic sluggishness in the registries, court politics, judicial corruption and discipline, escalating costs, “uncle judges” … you name it. But in the end, as literally the court of last resort, the judiciary, especially the Supreme Court, came to the aid of the wronged, the dispossessed, women’s rights, gender neutrality, press freedoms, welfare entitlements, victims of police excesses and state sultanism.

The people of this land have been the judiciary’s real constituency and support system helping to sustain its independence regardless of its all too obvious failings. The four judges’ open rebellion against the chief justice had come as a devastating hammer blow to the very institution itself which could do immense damage to its popular support system which gives it the strength to safeguard individual liberties and freedoms from Executive excesses. And this “mutiny” came at a time when the apex court had been engaged in a furious battle with the Executive over what it considers to be encroachment on its powers to make appointments under the current Collegium system. It also came at a time when hypersupremacist members of the ruling dispensation were calling for a change in the Constitution to erase its secular character and the principles of tolerance and coexistence which are embedded in that concept.

Judges are no angels. They have strong political views. There are Modi-baiters. There are RSS fans. There are some who have been associated in the past with alleged violations of the Wildlife Act. But institutionally, they are a protective wall. Breaching this wall could be a fatal attack on the Constitution. A divided and splintered Supreme Court is no match for an Executive branch hell-bent on grabbing power at the expense of individual liberties. A weakened chief justice is vulnerable to cheap shots and attacks from PIL-crazed lawyers for their own agendas, retired judges, state courts, lawyers’ associations. His very dignity and authority are at stake.

Grievances expressed against judges and judgments are not necessarily without merit. But surely they can be pursued without bringing the CJI and the judiciary into public disrepute and thereby weakening its popular base of support in these extremely troubled  times when there is need for judicial unity. Supreme Court judges do not need popular pulpits as do JNU and BHU students to air their grievances publicly. Imagine the judicial mayhem which could ensue if groups of High Court and Sessions judges began behaving in a similar vein. All semblance of authority would be eroded. And an already flawed system would go to hell.

What can be divided can be ruled. And that is what seems to be happening now. Already tongues are wagging. Supreme Court watchers say the apex benches are now factionalised into camps. This is not a blind defence of all judges. I am also aware that many of them would acknowledge some of the criticisms as valid. It is aimed at protecting the institutional importance of the chair they occupy from the perils of politicisation. It is aimed at reminding the honourable judges that if the judiciary is allowed to be reduced to ashes, there will be little or no chance of another Justice Hans Raj Khanna rising like a phoenix out of the fire to challenge Indira Gandhi when she was at her imperious worst. As Ben Franklin once advised Americans: “We must all hang together, or assuredly we shall all hang separately.” I believe that devastating axiom applies today to the Indian judiciary more than it ever did.

Did you find apk for android? You can find new Free Android Games and apps.
Share
Facebook
Twitter
Pinterest
WhatsApp
Previous articleSC asks 2 members of CERC to go on leave till a law member is appointed
Next articleComplainant eager, MP HC refuses to quash proceedings in religious conversion case