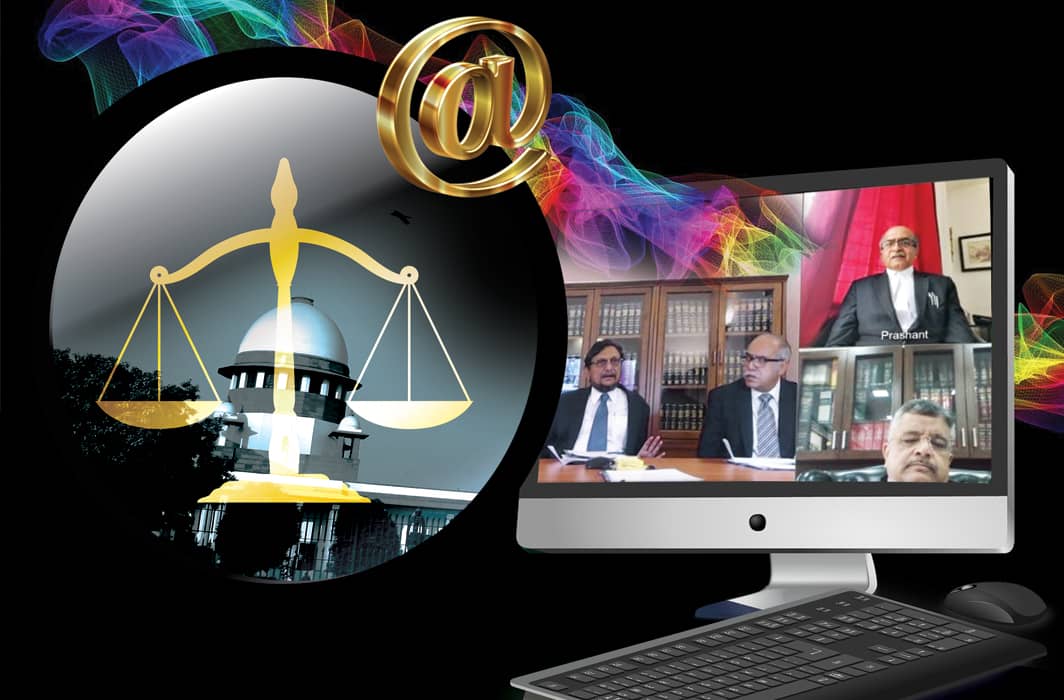 With the Court taking up over 7,000 cases during the lockdown through video-conferencing, it has become a global front-runner. The judiciary’s role is even more vital to the survival of democracy now.

The novel coronavirus has had a significant impact on the legal fraternity in India. Following the imposition of the 21-day lockdown in March, the key consideration was how to make the judicial system more effective during this time and ensure timely delivery of justice. It is a universally accepted notion that independent, timely and fair delivery of justice is vital to the functioning of democracy as it provides critical checks and balances against the functions of the executive and legislature.

Interestingly, in a departure from regular practice, the High Courts of Bombay and Karnataka issued notifications adopting virtual courts using video-conferencing facilities on March 17 and 21, respectively. Information and communications technology was used to deliver justice at a crucial time and under exceptional circumstances.

Conducting proceedings through video-conferencing was necessary as the apex court had suspended the entry of lawyers and other staff into its premises after the outbreak of Covid-19. Amid demands from bar bodies for resuming physical court hearings, the Supreme Court on June 3, 2020 released data that showed the success story of virtual courts. Approximately 2,893 advocates joined the virtual court hearings before 10 benches of the Supreme Court through video-conferencing.

A total of 617 benches, including 293 for main matters and 324 for review petitions, sat during this period. The Registrar Court also considered 150 matters, as per the apex court’s website. Participation of advocates in virtual hearings also increased gradually; approximately 25,000 video links were shared with advocates for the virtual court hearings. Apex court benches delivered almost 670 judgments, i.e. 132 in main matters and 538 in connected matters during this period. The Court reached a milestone on June 19 when it heard 7,197 cases on the 57th day of virtual court hearings. Its 11 benches took up 206 matters for adjudication. Further, the Court observed that “one virtual court can hear as many as 40 matters, instead of 20, through video-conferencing in a day”. Though India’s three-tier justice delivery system may have been criticised as being snail-paced, during the pandemic, the Supreme Court turned out to be a global leader in entertaining the huge number of cases.

The cases which came up before the benches were myriad. They included those of migrant workers, which the Court took suo motu cognisance of. They were beset by problems and miseries as they were stranded in different parts of the country. The Court also took suo motu cognisance of the plight of prisoners in over-crowded jails in the case titled, In Re: Contagion of COVID-19 virus in prisons, and directed states and Union Territories to decide which class of prisoners can be released on parole or interim bail. Further, the Court took into consideration the conditions of children in protection, juvenile and foster/kinship homes and directed that they be rehabilitated with their families wherever possible. Most importantly, the Court took up cases having a bearing on journalistic freedom of speech and expression, including those related to journalists Arnab Goswami and Vinod Dua, and matters related to the internet in J&K.

Courts elsewhere, be it the UK, the US, Singapore, Canada, Australia, Singapore or Spain, have all lagged way behind India’s Supreme Court in hearing or disposal of cases. The backlog of cases in the top courts of England and Wales ratcheted up to more than half a million during the coronavirus time. This is an increase of 22%, according to an analysis by the Criminal Bar Association. Claire Waxman, London’s victims’ commissioner, described the backlog as a “ticking time bomb” and stated: “We’re going to see it getting worse and worse.” The UK’s Supreme Court heard just 10 cases and pronounced 15 judgments from March 24 till date.

The US Supreme Court typically takes up between 100-150 petitions for hearing every year from among 7,000 cases seeking review of decisions of other courts. The total number of judgments pronounced by it between March 30 and June 8 was just 20. Australia’s top court heard 94 cases and pronounced 12 judgments between April 7 and June 3. The Canadian Supreme Court took up 173 cases for hearing between March 27 and June 11 and delivered five judgments. While South Africa’s apex court heard 51 cases during the lockdown period and delivered 58 judgments, in Singapore, the figure was 146 cases and 98, respectively. Only the Supreme Court in Spain had a busier schedule than other apex courts as it heard 800 cases via video-conferencing.

None of the Supreme Courts has taken a decision on physical reopening and continue to hear cases virtually. The only exception is the European Union’s Court of Justice, which resumed oral hearing from May 25. Singapore’s top court also allowed physical hearing in a very limited number of cases with social distancing and other precautions.

India’s Supreme Court had defended its “virtual courts system” after being criticised for the video-conferencing practise on the ground that the system does not adhere to the concept of “Open Courts”. Some lawyers complained that they were facing various problems—from sending a PDF file of their applications to addressing their arguments through video link. There­after, keeping in mind the health concerns of the community and the people at large during the pandemic, the Supreme Court said that it was important that the “administration of justice” did not collapse in the face of a pandemic. Further, it stated that the advantages of a virtual court system, especially in terms of time, energy and money saved by the litigants and advocates was coun­tless and this practice could be a game-changer in future. In a 38-page note released on May 2, 2020, the apex court strongly defended its virtual courts and said: “The judiciary of the Indian Republic is known and acknowledged as one of the most robust and progressive judicial institutions around the world, supporting and serving a democratic order.”

Across the world, we are witnessing a slowdown in day-to-day functions during the pandemic. In these extraordinary circumstances, the role of the judiciary is even more vital to the survival of democracy. Continuing with virtual court hearings will require active participation from all stakeholders. Judges of the Supreme Court, members of state bar councils and lawyers across the country will be required to modify systems and practices to better enable online adjudication. As many cities and towns do not have satisfactory connectivity and internet infrastructure, investment by states is imperative. Developing  and supporting mechanisms to ensure video-conferencing hearings in addition to courtroom hearings will only ensure that there is more than one way to access the highest court of the land and ensure justice.

—The writer is an advocate in the Delhi High Court