Bharat Bandh on Tuesday: Bar associations of Delhi to join protest against farm laws in solidarity with farmers 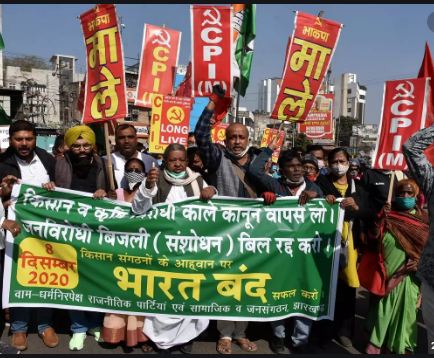 After winning the support of various Opposition parties for Tuesday’s one-day token strike, the Bharat Bandh call given by the protesting farmers is expected to impact a few services, including the supply of fruits, vegetables and milk in Delhi and the rest of the country. The Bandh called by farmers protesting the Centre’s farm laws will begin at 11am and will continue till 3pm, a day ahead of the sixth round of talks between protesting farmers and the Centre.

The farm unions have said their protest will be peaceful and they don’t want to create problems for the common man. Rakesh Tikait, spokesperson of a faction of the Bharatiya Kisan Union, said the strike will be against some policies of the government. Supporting the farmers, the co-ordination committee of all Bar Associations of Delhi has decided to hold a protest on December 8 against the Farmer Bill 2020 in all court complexes.

The other sectors likely to be affected are transport and banking as several bank and transport unions have expressed their solidarity with farmers. Emergency and ambulance, hospital services will remain unaffected.

Ahead of the Bandh, the Home Ministry on Monday issued an advisory to states and Union Territories, in which, it asked them to tighten security in view of Covid-19 guidelines during Tuesday’s Bharat Bandh.

The Opposition, including many regional parties, on Sunday came out in support of the Bharat Bandh. Farmers have been protesting on Delhi’s borders for the last 12 days demanding the repeal of the Centre’s new farm laws. They were marching into the city but have been barricaded out by the police since they do not have permission for the march.

Farm union representatives urged people to come forward to make Tuesday’s Bharat Bandh a success. Calling it an apolitical strike, the representatives have welcomed support from several parties. After the failing of five rounds of talks between the Centre and the farmer unions, the two sides are set to meet again on December 9, Wednesday, to resume negotiations.

The farmers are protesting against the Centre’s farm laws and claim it plans to end the minimum support price system in future. They say it will give corporates total control over the agriculture sector. The government has said the laws are a major necessary reform in the agriculture sector, it claims middlemen will be now removed, thereby increasing farmers’ income.

Did you find apk for android? You can find new Free Android Games and apps.
Share
Facebook
Twitter
Pinterest
WhatsApp
Previous articleNCRB to Delhi High Court: Will maintain separate annual report for transgenders in prison
Next articleBar Council of Delhi to support farmers’ Bharat Bandh call on December 8, to hold protests in all court complexes