Eight people, including three women and two children, were locked in their homes and burnt alive by a mob on Tuesday at village Bogtui near Rampurhat town. The violence took place after a local Trinamool Congress leader, Bhadu Sheikh was killed in a crude bomb attack while many villagers claim a local rivalry led to the killings. 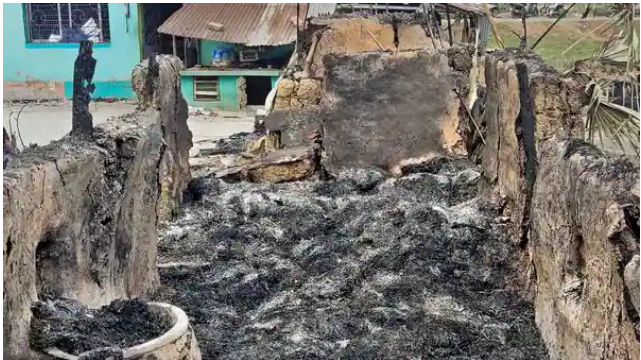 Extreme political awareness in West Bengal has come with a price tag: extreme political violence. This has been the hallmark of the state, proud as it is, of its secular stature, of its leftist or socialist past and of a generally open society where all are welcome and caste and race aren’t matters worth discussing. Unless, of course, you are political rivals: that is one class divide that Bengalis do not tolerate.

On Tuesday (March 22), in a village called Bogtui, on the outskirts of Birbhum district’s Rampurhat, a clash between two Trinamool Congress (TMC) factions resulted in one being shot dead. This was followed by a horrible retaliation ending in a gruesome massacre. Eight people, including a child and six women, aged between seven and 52, were burned to death. The dead included a newly married couple. Seven of the victims were related. It has been said the doors of the houses were locked from outside and the houses set on fire. The bodies were charred beyond recognition.

The sheer magnitude of the horror has shaken the area, the state and even the country. The allegation is that this is retaliation for the death of the TMC worker, Bhadu Sheikh, the night before. The bodies were found in two houses.

Village Bogtui is 220km from state capital Kolkata. The village has just 2,000 people, but political violence is not new here. Even during Left Front rule, violence has been a common occurrence in the village. There has always been lawlessness, including the manufacture of crude bombs, supply of arms and illegal sand and stone mining.

A media report, quotes a source as saying:

“The village has had two groups that have been at odds with each other for the past three decades… During the time of the Left, both the groups belonged to the Left. Since the change of guard, they have shifted allegiance to TMC… but their fight is continuing.”

This is the first such massacre in the reign of Mamata Banerjee’s TMC. The opposition, led by the BJP, has cried for the imposition of President’s rule and Governor Jagdeep Dhankhar, who has always been at odds with the state government, has also launched into the incident. Banerjee has written to the Governor saying this was a larger plan to malign Bengal. Even Prime Minister Narendra Modi has said that immediate investigation and punishment must be meted out to the culprits.

A special investigation team has been set up by the government to take prompt action. Action will also be taken against some policemen.

West Bengal: A history of violence

Political violence is not new in the state. However, some stand out for their sheer cruelty. On March 17, 1970 – 52 years ago – a family of Congress supporters, known as the Sain brothers, in the district of Bardhaman, were tortured and hacked to death by CPI(M) goons in broad daylight.

Naba Kumar Sain — the eldest son of the family — had his eyes gouged out, while his younger brothers, Malay and Pranab, were hacked dead in front of the watching family members. Naba Kumar was killed a year later. The incident was clearly done by the CPI(M), because the family members refused to switch allegiance to the CPI(M).

Even a private tutor, Jitendranath Rai, who had come to teach the kids in the family, was hacked to death. Later, the mother of the Sain brothers was forced to eat rice smeared with the blood of her sons.

Then, on April 30, 1982, the gruesome killings of 16 sadhus and a sadhvi of the Ananda Marg cult happened. They were waylaid on a bridge (the Bijon Setu) in south Kolkata, by CPI(M) goons. That morning, the monks were dragged out of taxis that were taking them to an educational conference at the organization’s headquarters in Tiljala, Kolkata. They were beaten to death and then set on fire simultaneously at three different locations. It happened in front of thousands of eye-witnesses.
No arrests were ever made, and after several calls for an investigation, a single-member judicial commission was set up to investigate the killings in 2012. The incident has gone into history.

There have been many more, and this incident is just an addition. However, there are some big differences here.

Firstly, this was an intra-party clash. The two factions that went to war had been CPI(M) members during the Left Front rule. Those were the times they fought over the meagre resources of the areas, sand, crushed stones and other building material, all illegally mined. The Left Front members collected their monthly dues from both and never interfered in the internecine feud.

When Mamata Banerjee came to power both parties swiftly switched allegiance to the TMC. That was expected, but their feud was kept alive. Their source of income was still the illegal sand mining and the crushing and selling of stones.

Secondly, the difference here (from the Left Front times) was that this sand and the stones are not directly sold to the builders. Under the TMC, the party-supported “syndicates” get to handle all building material. They are the ones buying these. The “syndicates” are least worried about the infighting.

When two parties want to do illegal mining in the same area, clashes are bound to happen. This reached a very high level.

The root cause, of course, economic. After the Left Front had killed all industry and commerce in the state through its militant trade unionism, the TMC promised “poriborton” (change). Then, as the Tatas were forcibly ousted from Singur, not a single major industrial group has come forward with any viable proposition. Not only has there been zero investment at this level, even the well composed MSME sector of the state has been drying up for a lack or orders and slack payments. The slowing of the economy and the pandemic did not help either. The state government has not helped in any way. It cannot, because it has no plan and no money.

This has led to huge layoffs, resulting in mounting unemployment and growing poverty.

The TMC has a huge cadre base, but it does not have the wherewithal to provide income opportunity to them. Hence, the sops have varied from cultural festivals that squeeze out government funds, donations to puja organizers and, of course, the formation and growth of “syndicates”. No builder in the state can source its own materials. They have to be bought (generally at higher prices) from these illegal “syndicates”. The government turns a blind eye, because this, at least, provides some sustenance for the cadres.

Illegal mining is not a specialty of West Bengal. It is carried out with impunity by thousands of people around the country, obviously under political patronage. However, while in other states this is mostly for greed, in West Bengal this is for sheer sustenance.

Think of this village of 2,000 people, Bogtui. There is nothing there – Birbhum is beautiful, but it is arid land – that can sustain lives. And there are no government projects at hand to provide succour. So they turned to the only resource they have under their feet: the sand and the rock.

TMC seniors never interfered, because this was what kept the people – generally known to be troublesome – of the area occupied and the votes assured. But there has been no effort at legalizing the mining activity or imposing an order on it. The area has gone wild, so to say.
It has been a ticking time-bomb for long. This time the fuse just blew.