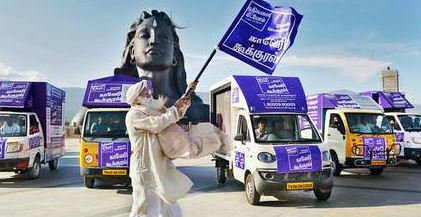 New Delhi (ILNS): Spiritual baba Sadguru Jaggi Vasudev and his Isha Foundation have been collecting an incredible amount of funds for planting trees along the banks of the Cauvery river. The Karnataka High Court has taken up this case suo motu, after removing the original petitioner and today appointed advocate B V Vidyulatha as amicus curiae.

A division bench of Chief Justice Abhay Oka and Justice S Vishwajith Shetty has fixed November 23 as the next date of hearing.

The original petitioner against this project had filed this as a Public Interest Litigation, but the court later found that the petitioner had sent a legal notice to Discovery Channel, asking it to not cover this project. The court said this no more remains a public interest matter and removed the petitioner.

The baba calls this act the Cauvery Calling Project and is asking for Rs 42 for each of the 253 crore tree saplings that it wants to plant along the 639 km stretch of the Cauvery (on the banks) from its birthplace in Talacauvery to Thiruvarur. The money is being collected from the public.

Also Read: Do not paint civil cases as criminal just to speed up trial, says Punjab and Haryana High Court

On January 7, the Court had asked the foundation to submit the details of the amount collected in the name of the Cauvery Calling Project.

Did you find apk for android? You can find new Free Android Games and apps.
Share
Facebook
Twitter
Pinterest
WhatsApp
Previous articleBrisk voting in Madhya Pradesh by-polls; political ambitions of prominent leaders at stake
Next articleYou Should Know all about Children’s Rights under UNCRC and Child Protection in India