The decision has been made looking at the present situation of the pandemic and school closures, and also taking in account the safety and well-being of students, the education ministry said. 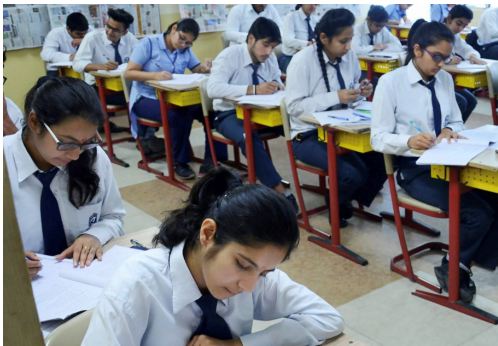 The Central Board of Secondary Education on Wednesday cancelled the Class 10 board exams and the Class board 12 exams have been deferred in view of the nationwide Covid-19 surge that had led to parents, students, and various states demanding the exams be called off.

The announcement comes after a high-level meeting chaired by Prime Minister Narendra Modi to review the examinations to be held at various levels in view of the developing coronavirus situation. Union Education Minister Ramesh Pokhriyal Nishank, the Principal Secretary to the Prime Minister, Cabinet Secretary, and School and Higher Education Secretaries were among the top officials who attended the meeting.

The CBSE exams for Class 12, which were to be held from May 4 to June 14, have been postponed, tweeted Nishank. These exams will be held after reviewing the situation on June 1. A notice of at least 15 days will be given before the start of the examinations, said the education minister in his tweets.

The Board Exams for Class 10 to be held from May 4 to June 14 were cancelled. The results of Class 10 board will be prepared on the basis of an objective criteria to be developed by the Board. Any candidate who is not satisfied with the marks allocated to him/her on this basis will be given an opportunity to sit in an exam as and when conditions are conducive to hold the exams, the education ministry said in a press release.

The decision has been made looking at the present situation of the pandemic and school closures, and also taking in account the safety and well-being of the students, the education ministry said.

In the meeting, Prime Minister Modi said the well-being of students has to be the top priority for the government. The Centre would keep in mind the best interests of students, ensuring their health was taken care of but their academic interests were not harmed, he added.

As per the CBSE board exams’ previous schedule, both for class 10th and 12th, the exams were slated to be held from May 4 to June 7 and the results were likely to be announced by mid-July.

Over the past few days, Opposition leaders such as Rahul Gandhi and Arvind Kejriwal have been appealing to the Centre to postpone the exams. Similar appeals were made by child rights bodies, parents, and several state governments to the Centre to reconsider the plan to conduct offline CBSE board exams next month.