Reiterating parts of his speech on Friday where he said even well-informed sections of society are unaware of the importance of the Constitution, Justice Ramana said there is still a need to spread more understanding about the Constitution. 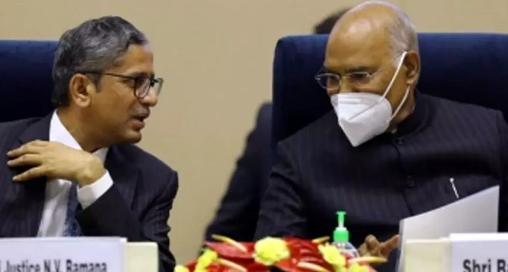 Chief Justice of India Justice N.V. Ramana on Saturday said the legislature does not conduct studies or assess the impact of the laws that it passes and leads to some big issues.

Speaking at the valedictory ceremony of the two-day Constitution Day celebrations which concluded today, Justice Ramana gave the example of Section 138 of the Negotiable Instruments Act. “Now, the already burdened magistrates are further burdened by thousands of these cases. Similarly, rebranding the existing courts as commercial courts, without creating a special infrastructure, will not have any impact on the pendency.”

The CJI said only courts can’t be blamed for the liberal acquittals and adjournments. “Non-cooperation, procedural lapses and faulty investigation cannot be blamed on courts alone. The truth is that the public prosecutors, advocates and parties, all have to co-operate with the judicial process,” Justice Ramana said.

Reacting to Attorney General K.K. Venugopal’s suggestion of setting up courts of appeal to overcome judicial pendency, restructuring of the judicial system and altering the hierarchy of the courts, CJI Ramana said pendency is multifaceted in nature and the suggestions received during these two days merits government consideration.

“Since Independence, I do not think there has been a serious study to consider what exactly should be the structural hierarchy of judiciary in India,” he said.

Reiterating parts of his speech on Friday where he said even well-informed sections of society are unaware of the importance of the Constitution, Justice Ramana said there is still a need to spread more understanding about the Constitution.
“If people are unaware about their rights and entitlements, they cannot claim benefit from the same. People also need to know
the scope and limitations of the roles ascribed to the different organs of the State. We need to clear the prevailing misconceptions. For example, many people in this country believe that it is the Courts which make the laws.”

CJI Ramana while appreciating President Ram Nath Kovind’s legal background said that it was his vision that the courts should translate judgments into Indian languages so as to reach the maximum number of people.

CJI Ramana also highlighted that the central funds largely remain unutilised as states are not coming forward to match the grants.

He appreciated the Judiciary for being one of the first institutions to shift to the online mode. He said: “This has opened a world of opportunities and judiciary has witnessed innumerable benefits arising out of it.”

For this, he thanked Supreme Court judges including Justice A.M. Khanwilkar, Justice D.Y. Chandrachud, and Justice L. Nageswara Rao and other High Court judges. He said the Constitution Day celebrations this year were special because the three organs of the State came together to exchange their views on various issues.