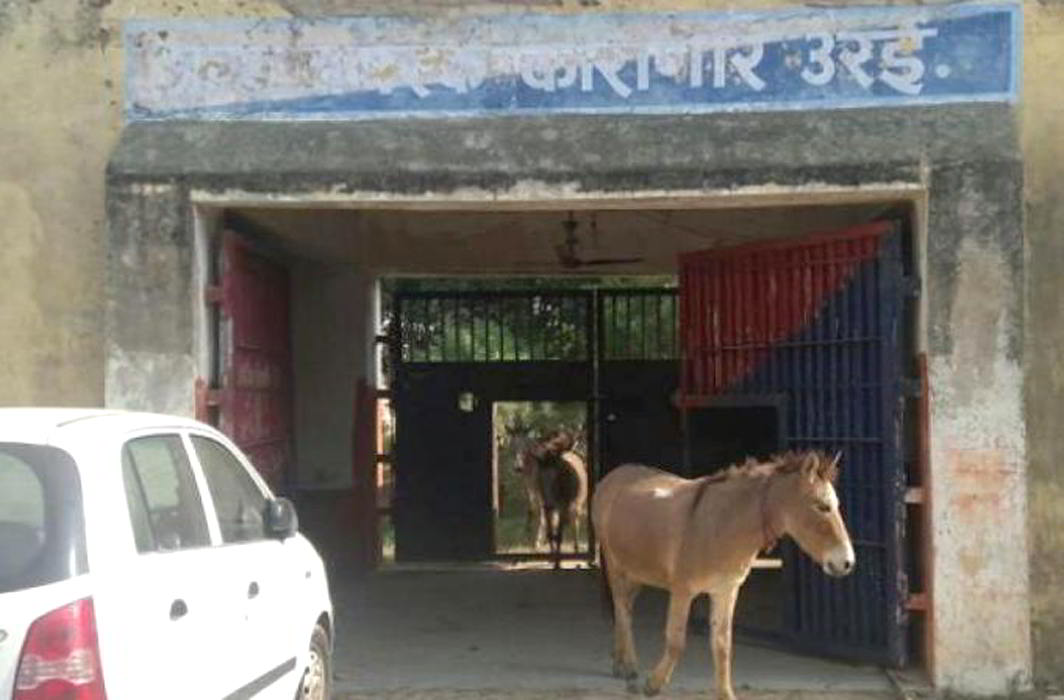 Donkey’s work isn’t that easy in the racially charged atmosphere of Uttar Pradesh these days. With Chief Minister Adityanath Yogi hell-bent on spreading the good Swachh Bharat message of Prime Minister Narendra Modi, among the first places to be beautified were the jails, where political memories often linger.

And eight lawless donkeys of indeterminable race, caste and religion had the temerity to munch through some of the most expensive saplings in Uttar Pradesh, especially panted by Orai district jail superintendent Sita Ram Sharma to create an ambience of welcome to those incarcerated for socially acceptable acts of lynching, rape and even politically charged murder of writers of journals.

If the eight donkeys thought they were an extension of the three idiots, they were wrong. Yet, nobody read them their rights when Sita Ram controlled his divine rage to just incarcerate the eight brats of the donkey world and no more. It was a record of sorts. With jails in the country as overcrowded as they are, how an empty cell large enough for eight donkeys was found is being debated in political circles. Are criminals being fooled to stay in packed barricades? Are there actually empty cells that cater to influential politicians, and sometimes, donkeys?

The donkey population of Uttar Pradesh may be high, but there is no registry of criminal donkeys. Not yet. Now that could begin. A proposal for a special court for them could be in the air.

However, what transpired later exposed a lot of the aspirations and affiliations of the donkeys. Reacting to appeals from the owner of the donkeys, Shakti Gahoi, a BJP leader, immediately approached the prison authorities and asked them to let the donkeys go.

It’s yet to be clarified as to what charges the donkeys were incarcerated for four long days. It is also not clear which investigating agency, or which arm of the law—was it the police, or the CRPF, or even the SPG—was responsible for the arrests. Was an FIR lodged? If so, by who?

PETA might want to start an agitation on this. Was it not the fundamental right of the donkeys to eat? And in the Hindu-state of UP, how was it that donkeys enjoy fewer rights than cows? Donkeys, after all provide a ride to goddess Jagadhatri.

There is a counter-agitation planned, it is rumoured, by environmentalists, who say that Sita Ram was right in trying to protect the expensive plants. The donkeys should have been mindful of the environment and not treat every living and non-living element on earth as food.

The other curious matter is of bail. How much was the bail set at and who set it? Which court of law was involved? Who paid the bail amount and to who? Was the bail amount logged in the books of accounts of the jail? Nobody wants to see a donkey scam emanate from UP, the holiest of holy states of the country.

Further, is this a case of kidnapping? The donkey owner has been quoted in the media as saying: “For two days, I could not find my horses and donkeys. When I came to know that they are in jail, I sought the help from local BJP leaders. With their intervention the animals were released. With a ruling party leader making the request, the prison official immediately signed the release orders.”

The release of the donkeys from jail was witnessed by locals and has been photographed as well. Forced incarceration without the knowledge of the court is a crime in itself, even if those who were jailed were plant-destroying, anti-environmentalist, inhuman donkeys. They were taken away without the consent of their “guardians” (it has been legally established now that everybody will have to have a guardian, however old) and put behind bars.

One agitator has been reported to have said anonymously that Sita Ram will have to face the music. He has committed the inhuman act of forcible abduction and jail. “He must have broken some law.”

The case is getting murkier.