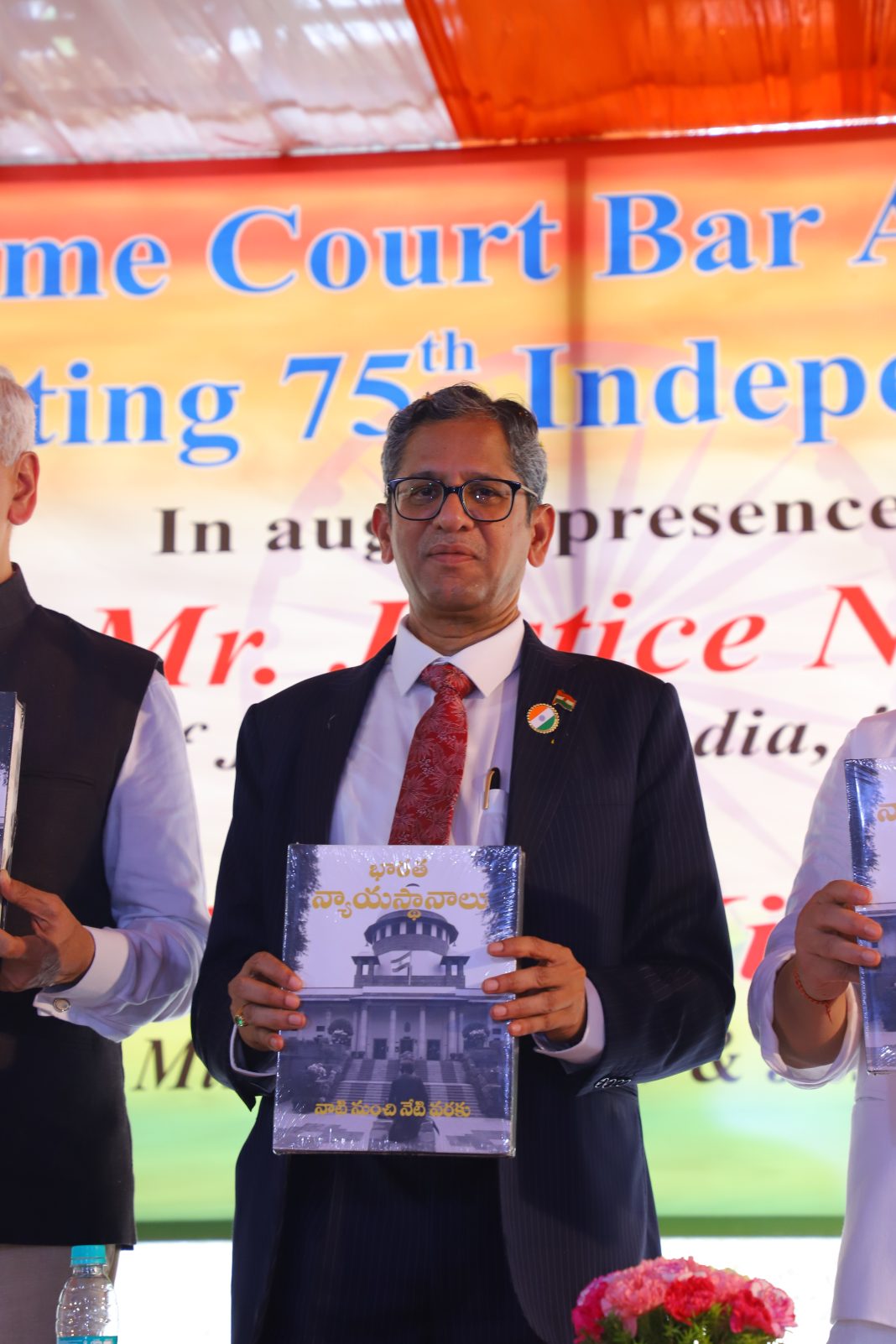 Chief Justice of India N.V. Ramana on Monday said the Judicial system of the country was unique, not only because of its commitment to the written Constitution and its spirit, but also because of the immense faith reposed by the people in it.

Addressing the gathering at the celebrations of 76th Independence Day at the Supreme Court Complex, ramana said, “People are confident that they will get relief and justice from the judiciary. It gives them the strength to pursue a dispute. They know that when things go wrong, the judiciary will stand by them.

As per the CJI, the struggle for independence was not merely for freedom from colonial power, it was for dignity of all. It was for laying the foundation of democracy. This foundation was laid through years of detailed deliberation in the constituent assembly, which produced the most progressive and scientific document, the Constitution of India.

He said, “The goal was to establish a democracy, where a nation is built on aspirations of people and where equality takes center stage. To have a democratic form of governance, was of utmost importance for us to hold the society together. Like Dr. Ambedkar said,
“Democracy is… essentially an attitude of respect and reverence towards fellow men.

“Today, we are celebrating the transformational journey of 75 years,
in which a mere colony emerged as the largest democracy of the world. All over the world, Indians are occupying key positions and contributing in a big way in shaping the global future. They are all products of independent India. We must thank the founders of independent India, for their vision and for setting up great institutions of learning.

“As we sit and cherish the journey we have undertaken so far; we must not forget the contribution of the great freedom fighters and legal minds who made this journey possible. Throughout the struggle for independence, lawyers like Mahatma Gandhi, Motilal Nehru, Sardar Patel, C.R. Dash, Andhra Kesari Tanguturi Prakasam Patulu Garu, Lala Lajpat Rai, Saifuddin Kitchlew and P.V. Rajamannar fought their battles from courts to the streets.

“Similarly, the story of framing of our constitution would be incomplete without recounting the contribution made by the
lawyers. Many of the drafters left their lucrative practices to be a part of this endeavour. Dr. B.R. Ambedkar, Alladi Krishnaswamy Iyer, K.M. Munshi, Purushottam Das Tandon, T.T.
Krishnamachari, G.B. Pant, Gopalaswami Ayyangar were few of the celebrated members of the constituent assembly. It was their dedication for the people, sacrifice for the cause and the deep
commitment to the future, which shaped our Constitution,” added Justice Ramana.

He said under the Constitutional framework, each organ has been given a
unique obligation. The notion that Justice is only the responsibility of the Court is dispelled by Article 38 of the Indian
Constitution, which mandates the State to secure justice: social, economic and political. Every deed of each organ of the state has to be in spirit of the Constitution. All three organs of the state- the executive, legislature and the judiciary, are equal repositories of Constitutional trust.

The Indian judiciary, since its inception, strove to fulfill the constitutional aspirations. The judiciary has, through
interpretative exercise, also strengthened various independent institutions, be it the Election Commission, the Central Vigilance Commission, the Comptroller and Auditor General of India and so on, added the CJI.

He said the legislature may not be able to foresee the issues, which might come up during the implementation, adding that by interpretation of statutes, the courts have given effect to the true intent of legislature and also made the statutes relevant to the contemporary times.

As per the CJI, the act of doing justice transcends beyond the laws. He quoted Sri Nani Palkhivala, “Dharma lives in the hearts of public men; when it dies there, no Constitution, no law, no amendment,
can save it”.

Justice Ramana said the Indian Constitution is the fundamental document, which regulates the relationship between the citizens and the Government.

“While it has granted us inalienable rights, it places upon us certain fundamental duties, which are not merely pedantic or technical. They were incorporated as the key to social transformation. Our framers imagined a nation, where citizens are aware, alert and able to make right decisions,” he added.

The CJI called language as a significant key to accessibility.

He said, “Today, in the interest of disseminating information, we have released a quality publication of Supreme Court in Telugu. With this, we have this
book ‘Courts of India – Past and Present’ in seven languages. I hope this book will appear in all Indian languages soon. I
congratulate the Director and officials of the Supreme Court Library for doing a commendable job. It has been my personal endeavour to advocate for the Indianisation of Judiciary.

“Our system will truly belong to the people, when we honour and cherish
our diversity. The lawyers are best placed to be the ambassadors in promoting
constitutional culture and spirit. While it is the mandate of the constitutional courts to uphold human rights and fundamental
freedoms, the lawyers play an instrumental role in leading the courts in the right direction. It is essential for each generation to share with successive
generations the experiences and struggles of the past.

“My caution to the young professional is that there are no short cuts to success. Hard work and sincerity always pay in the long run. One should not lose hope. Remember your commitment towards society. This institution needs your vigour and the freshness of your thoughts. I urge every citizen, to be a meaningful stakeholder in our democracy. We all must try to imbibe the Constitutional
philosophy in its true spirit,” he added.

“It is he, who designed the pride and identity of Independent India, our National Flag,” noted the CJI.

He also expressed concern over the rising cases of Covid-19. He appealed to people to remain careful and not let down their guard.

He said, “I remember the time when I took over as Chief Justice, the once in a century pandemic nearly destroyed us. Not even my family members could attend the swearing-in ceremony, there was fear everywhere. Many near and
dear ones of all of us lost our lives. Lawyers, judges, officers of the
registry were scared to touch the documents.

“The court has inherited the backlog of nearly a year on account of Novel Coronavirus and there were lockdowns. In the last 16 months, we could physically assemble for only 55 days. I wish situation was different and we could be more productive. It is just and natural for people to have high expectations, but regrettably, the forces of nature were
against us. I hope in the near future, the situation will become normally, to the full potential.

“When Covid-19 was taking away our near and dear ones, our entire system worked fearlessly to deliver justice. Both lawyers and judges have worked without any break, both online and offline. Under the guidance of the computer committee, our video conference system continued to evolve,” added the CJI.

Talking about the Supreme Court Bar Association, which organised the event, Justice Ramana said the association has been able to resolve several long-standing issues. Even in the most trying times, it extended its services to the most needy. SCBA stands out as one of the most dynamic associations in the country, he added.

Did you find apk for android? You can find new Free Android Games and apps.
Share
Facebook
Twitter
Pinterest
WhatsApp
Previous articleCJI NV Ramana pays tribute to architect of the Indian National flag Pingali Venkayya
Next articleI have a clear cut role to play as a bridge between the Executive and Judiciary: Union Law Minister Kiren Rijiju