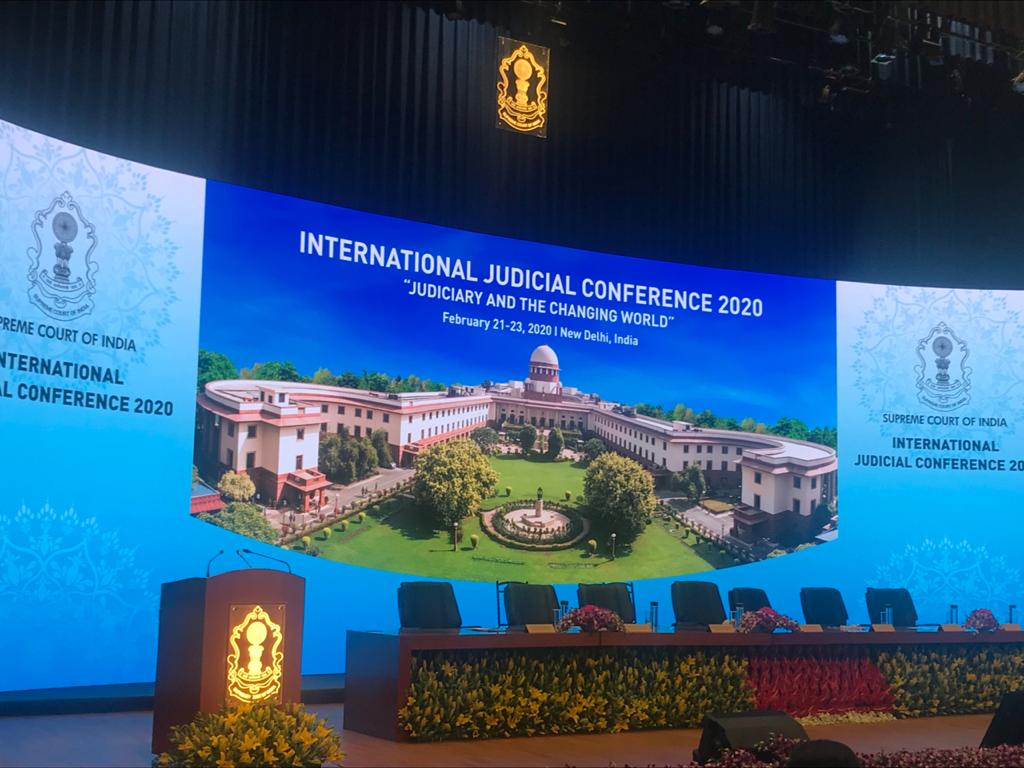 The conference is also attended by Union Minister for Communications and IT, Law and Justice.

Honorable Judges of the Supreme Court on the dias,

Honorable members of the higher judiciary from across the globe,

Honorable Judges of the Supreme Court and the High Courts,

It gives me great pleasure to be present here today in the midst of towering personalities from the field of law and justice who strive to ensure justice and dignity to billions of citizens across the world.

The seat of justice which you occupy inspires enormous trust and confidence among people in society.

I convey my warm wishes to all of you!

This conference is being organised in the beginning of a new decade of the 21 century. This is going to be a decade of remarkable changes not only in India but across the world. These transformational changes will impact all the frontiers, be it the society, the economy, or technology. These changes need to be rational as well as just and fair. These changes should be equitable to all and should also meet the needs of future. And that is why it is essential to deliberate on Judiciary and the Changing World today.

It is a happy augury that this conference is being organised when India is celebrating the 150′ birth anniversary of Mahatma Gandhi.

Gandhiji’s life was dedicated to the cause of truth and service, which are the foundational tenets for any system of justice. And as you all know, he was himself a Barrister, and belonged to the fraternity of lawyers. In his autobiography, Gandhiji has written in detail about the first case he had argued. It was in Bombay, now Mumbai, during the period of his struggle in the city, when he got his first case. But he was told that he would need to pay a commission for the same.

Gandhiji categorically refused, saying whether or not he gets the case, he would not pay any commission. Gandhiji was committed towards pursuit of truth and had absolute clarity about his value-system. Such clarity came from his upbringing, the values he lived by, and his lifelong study and understanding of Indian ethos.

Friends, The Rule of Law has been a core civilizational value of Indian society since ages.
Our ancient scriptures proclaim Which means ‘Law is the King of Kings, Law is supreme’. It is this ethos, which has been ingrained in the Indian psyche since centuries, which forms the bedrock of the tremendous faith reposed by every Indian in our judiciary.

In recent times, there have been some critical judicial judgments and decisions which have been the subject of global discussion. Before these judgments were delivered, several apprehensions were being expressed about the consequences. But look what happened! 1.3 billion Indians wholeheartedly accepted the judicial verdicts.

Friends, For thousands of years India has been moving cherishing these values of trust and faith towards o justice b is these very values that inspire our Constitution. Only last year, our Constitution completed its 70 years. The architect of our Constitution, Dr. B R Ambedkar had said: “Constitution is not a mere lawyer’s document, it is a vehicle of life, and its spirit is always a spirit of age.” This very spirit has been taken forward by our courts, and in particular by the Supreme Court of India. Also. the same spirit has been kept vibrant by our Legislature and Executive.

Respecting each other’s jurisdiction and dignity, these three pillars of the Constitution have resolved various challenges faced by the country on several occasions. And we are proud of having developed such a rich tradition in India. In the last five years, various institutions of India have further strengthened this tradition.

In the country, about 1500 archaic laws have been repealed. And speed has been demonstrated not only in doing away with irrelevant laws but also in enacting new legislations aimed at strengthening the social fabric.

In legislating the rights for Transgenders, the law against the practice of Triple Talaq, expanding the rights of Divyang (persons with disabilities), the government has worked with complete sensitivity and responsiveness to the needs of modern society.
Friends. I am pleased to learn that the subject of Gender Just World is also being deliberated as a part of this conference.

No country or society of the world can claim to achieve holistic development or claim to be a just society without Gender Justice.

Our Constitution guarantees Gender Justice under the provisions of the Right to Equality. India is among the few nations of the world which have ensured the right to vote for women since independence.

Today, after 70 years of independence, the participation of women in elections is at its highest level ever! Now, India of 21st century is rapidly encouraging such participation in other walks of life too.

For the first time in India, the enrolment of girls in educational institutions, is more than the boys. This is on account of successful programmes such as Beti Bachano Beti Padhao.

Similarly, the government has brought about many changes, whether it be the appointment of women in military service or in the selection process of fighter pilots or regarding their freedom to work in the mines at night.

Today, India is among those few countries of the world which sanction paid maternity leave of 26 weeks to career women.

In this changing world. India is scaling new heights. creating new definitions of success and challenging old beliefs and perceptions. There was a time when it was said that rapid development and environment protection cannot go together.

Thus, India has shown that infrastructure development can happen simultaneously with the protection of environment. Friends, Today, on this occasion, I express my gratitude towards the Indian Judiciary which has recognized the concept of balance between development and environment and also given continued guidance in this regard.

Providing speedy justice has been a constant challenge for our Judiciary. To some extent, technology can be of assistance in this regard. In particular, internet-based technologies can help in procedural management of courts, and will benefit the justice delivery system to a large extent. The government is also working towards connecting every court to the eCourts system.

Establishment of the National Judicial Data Grid would also result in simplification of court processes.

In addition, in these changing times, issues like Data protection, Cyber-crime pose new challenges for the Judiciary. I trust that this conference will carefully deliberate on these challenges and that several constructive suggestions would emerge from these discussions.

I am confident that the deliberations of this conference will offer a variety of superior solutions for the many challenges of the future. 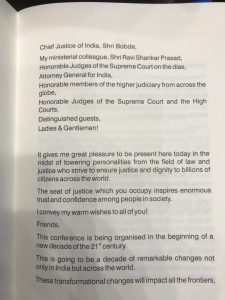 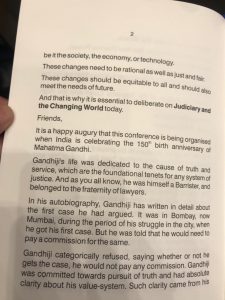 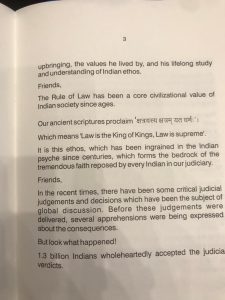 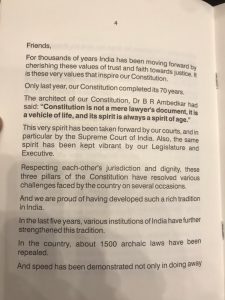 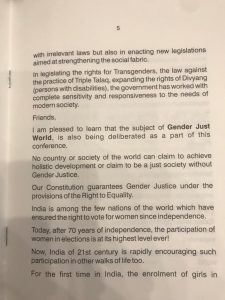 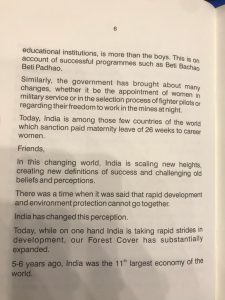 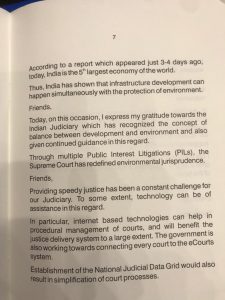 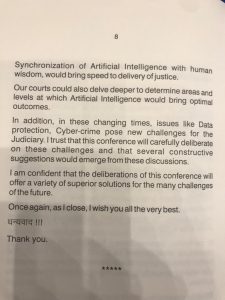