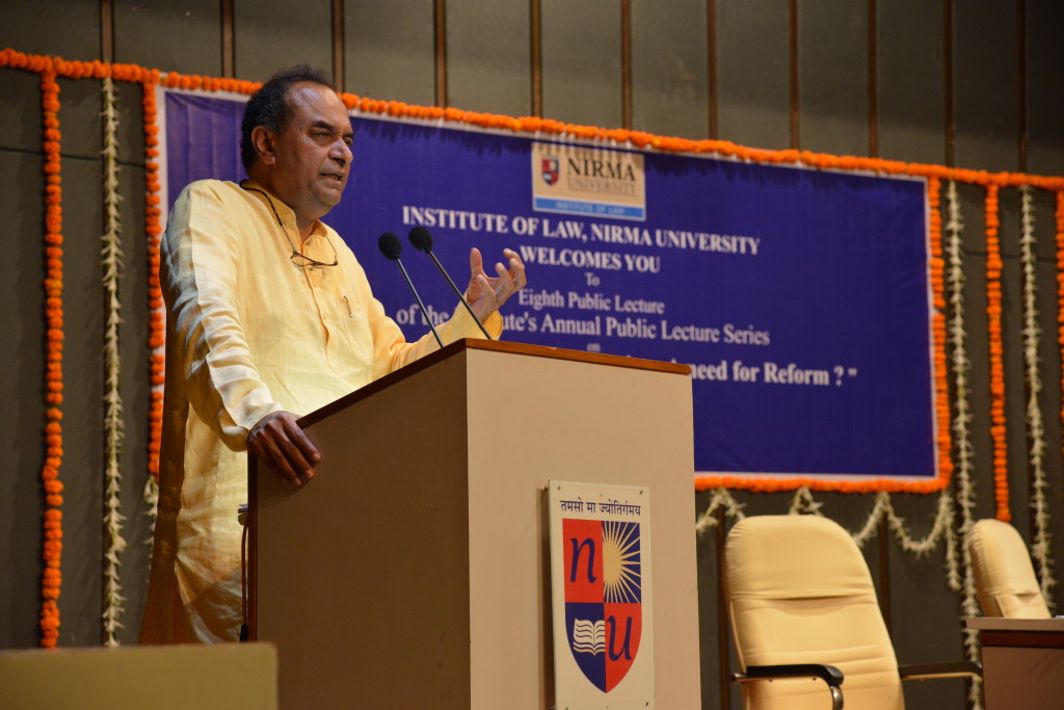 He said that the whole of 30th, they (the judges) stayed in Nagpur and moved to Ravi Bhawan that night. At night the judge (Loya) had complained of distress and was rushed to Dande hospital where they spent 15-20 minutes and an ECG was taken.

Waikar also reaches there, continued Rohatgi. “There they met Dr Pankaj Harkutt who is a cardiologist and are advised to go to Medetirina which is 2-2.5 km from there. Unfortunately at the next hospital he was declared “brought dead”, hence he did not die in Medetirina.

“If we had to discount everything what the four judges said then we have the postmortem report. The postmortem was done in a government hospital and then the body was taken to Ghategaon,” he said.

Then Rohatgi was back at castigating the published article. He said: “The intention behind the appearance of the article is questionable itself.” He referred to page 19 and submitted the Marathi version first. “Whatever is written in the article appears to be false and unverified, which appeared three years after the death.”

Then Rohatgi read out a postmortem report – Department of Forensic Science, Govt of India, Nagpur report. “As per police, at 1:12 am he suddenly complained of chest pain. At 4:00 am, he was brought to the hospital and was declared dead.”

Also, the report talks about the jurisdiction of the police station. The main centre for the postmortem centre is Sitamarhi. Then the counsel submitted various angles of the reason why any particular hospital was chosen.

The bill of Medetirina is referred to, wherein Dr Pankaj Harkutt is the referred doctor. “Judge Srikant Kulkarni was present when Judge Loya was admitted to the hospital,” Rohatgi reads. “When the ailing judge’s name was entered as Brij Mohan and not Brij Gopal. Hence the change in name in medical report is just a mistake of dictation on the part of judge Kulkarni.”

He referred to the ECG fiasco. “For a layman, any impulse taken by the ECG machine nodule, the ECG is recorded. Hence, one of the judges said that the ECG was taken and recorded. ECG was not done is not a conclusive fact in this case. There is disparity in the views regarding ECG.”

Page 59A was referred to, containing the statement of the father of Judge Loya.

He also tried to debunk the political angle, saying that the “Ishwar Vahiti concerned here was Justice Loya’s friend and not the one who is associated with the RSS.”

Senior counsel Indira Jaising, on the opposing side, submitted that nobody denies in this case that ECG was not attempted but it could not be done. She said that the article was preceded by a dismissal order of the person by the Supreme Court, which happened 2-3 months ago.”

Rohtagi submitted that “only because Vahiti  was a friend and that too close, he was handed over Judge Loya’s body. He established his close relationship with Judge Loya in court.”

He explained: “Maharashtra is divided into ten commissionarates and 67 districts.” He place before the court a judgment in which in Maharashtra special powers are given to ACPs to conduct the investigation. He submitted that the investigation was carried out properly and there was nothing suspicious about the natural death of the Judge Loya which was only due to heart attack. He again raised the question as to why a petition has been file in the Supreme Court after a long time.

He submitted that there was nothing wrong in procedure as well, because as per the Bombay police manual of 1959 a police officer is authorised to conduct investigation in the case of suspicious deaths.

He said that it was necessary that documents are brought under oath. “This is not a politically motivated matter,” he said.

Rohatgi interfered, saying: “It’s not written anywhere that in every writ petition, rejoinders, etc must be recorded.”

To which Dave said: “Until we have the documents on the affidavits, justice won’t be served because the judges will not be able to judge independently. The State has nothing else to show. How can Rathi reply on 23rd itself?”

At this the CJI commented: “The question is whether section 174 CrPC has been duly complied with or not. This could be a ground of suspicion.”

Dave said: “The state failed in providing proper security to Judge Loya, did not even provide proper medical services, also, post death, the real cause of death was not figured out by the state.”

The matter is now listed for March 5.