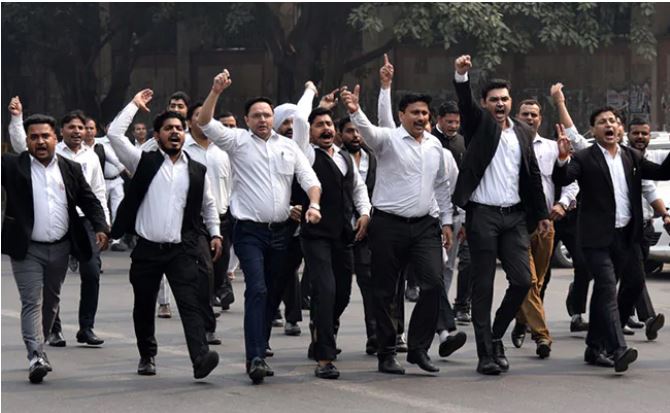 The Madurai bench of the Madras High Court on Wednesday passed an interim order to restrain advocates from wearing the black gown/coat and neckband while participating in strikes and demonstrations.

The division bench of Justices N. Kirubakaran and B. Pugalendhi passed this order. The Court observed that the advocate’s gown, which can be worn only within the Court premises, cannot be taken advantage of by advocates who participate in strikes carried out in the streets.

The Court has, therefore, directed the Bar Council of Tamil Nadu and Puducherry to direct advocates not to wear the Advocate’s black gown and neck band during such protests.

The petition filed by advocate B. Ramkumar Adityan sought a direction to ensure that advocates maintain a proper dress code during court proceedings and to restrain them from wearing the lawyer’s neckband and gown during strikes, boycotts and agitations.

The petitioner said some advocates are found to use their own mode of dress and not appearing in proper dress code during Court proceedings. “Dress code is a symbol of the dignity, honour, wisdom and justice and these are the values which any Advocate has to keep up with.”

The Court also said every Advocate needs to maintain the grace and the dignity of the profession. One cannot wear T-shirt and Jeans and come to Court, the Temple of Justice.

The petitioner said various representations have also been addressed to the Bar Council of Tamil Nadu and Puducherry over such issues in the past.

The Court was also concerned that Advocates participating in strikes, boycotts of Courts and road agitations wear their gown and neckband, although such demonstrations are the antithesis of their obligations under the Advocates Act, 1961. This has to be strictly avoided, the petitioner contended.

The petitioner has further urged the Madras High Court to pass directions so that the Bar Council of India and the State Bar Council ensures that Advocates do not wear advocates’ neckband and gown during strikes, boycotts and agitations.