The two past athletes Leander Paes and Nafisa Ali have just joined a political party, this time the Trinamool Congress (TMC). Both were welcomed with open arms into the party by party supremo Mamata Banerjee, Chief Minister of West Bengal, and this happened in Goa. 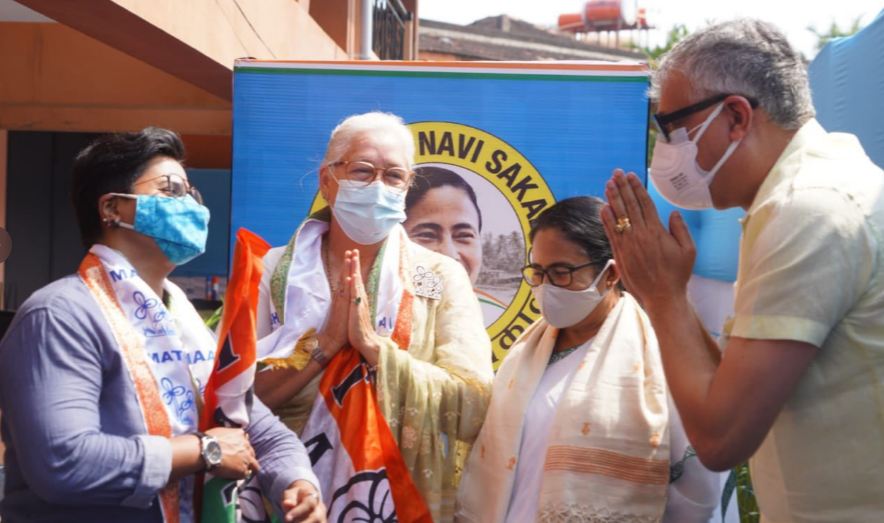 The age is of sportspersons, celebrities and politics. The two categories meld in a pot, creating a strange amalgam of neither. Following in the footsteps of cricket – Navjot Singh Sidhu can’t be anybody’s pole star, though – two more past athletes have just joined a political party, this time the Trinamool Congress (TMC). Both were welcomed with open arms into the party by party supremo Mamata Banerjee, Chief Minister of West Bengal, and this happened in Goa. The two are Leander Paes and Nafisa Ali.

For Nafisa, actor, former beauty queen and also former national champion swimmer, it will be her second foray into politics, the first being with the Congress, with whom she had even fought – pretty sadly, one must say – Mamata. Lately, she has been seen chilling in Goa with Lucky Ali and the bling band, as well as with poll strategist Prashant Kishor. Not sure which part brought her back into the political fold.

For Leander, the itinerant former tennis star with a Kolkata heart, it has always been home turf. The Atlanta Olympic Games bronze medal winner has been a bit out of sorts lately, finances disagreeing with his expenses and a new OTT series broadcasting the story of his differences with his doubles partner Mahesh Bhupathi not generating the expected heat. Whether Lee (that’s how he is known) will be able to use TMC to his advantage, or will the TMC manage the better side of the deal is to be seen.

The general aim and purpose of the TMC in these two acquisitions are the upcoming Goa elections. Why Goa? Because, to remain relevant and legally solvent with a national party tag, the TMC has to have more MLAs than it can boast of now, across state boundaries. According to Election Commission of India guidelines: “If a political party is treated as a recognised political party in four or more States, it shall be known as a `National Party’ throughout the whole of India, but only so long as that political party continues to fulfill thereafter the conditions for recognition in four or more states on the results of any subsequent general election either to the House of the People or to the Legislative Assembly of any State.”

The following are the prerequisites for becoming a national party:

Since Delhi is Didi’s aim – to that effect she has even made unfavourable comments against her ‘parent party’ the Congress – she wants her party to boast a national presence and Goa is as good as any to overcome limiting friction.

Hence, Lee and Nafisa will have to be around to boost the Prime Ministerial ambitions of Mamata Banerjee. That is their sole purpose. And that is why these acquisitions were announced in Goa. Interestingly, even while in selecting Lee and Nafisa, Mamata has also shown that she will be using a strong religion-agnostic card, maybe the party thinks that Lee’s being a Christian will help in the party’s ambitions in Goa. Frankly, whatever public appeal these two sportspersons of yesteryears had, are in the past, the new generation would (except in Kolkata) not be overly influenced by these names. Goa goes to the polls in February next year.

This was Mamata’s first visit to Goa (as Chief Minister) and her tour guide will obviously be former Goa chief minister Luizinho Faleiro, who snapped his long tie with Congress and joined the TMC last month. Also around is MP Derek O’Brien. Mamata’s tour itinerary includes the Basilica of Bom Jesus at Old Goa and Bodgeshwar Temple at Mapusa.

Ground-level interactions will be with local vegetable and flower vendors at a market in Mapusa, 9 km from the state capital, an obvious move to capture the local flavour.

Didi has already spoken about the BJP’s “anti-Hindu” tag on her, and she virtually took a leaf out of Prime Minister Narendra Modi’s fascination for acronyms, when she said that TMC also stands for the temple, mosque and church.

Paes, who is settling down to a life away from tennis, tweeted: “I live in Goa. I was born in Bengal, I’ve traveled the length and breadth of the nation. At the end of the day I am a patriotic Indian. For me it’s about doing (sic) India proud & to make a difference and give back to my roots. Didi’s vision is to make India, the largest democracy, a successful nation. I’d like to join in and do my bit for every Indian.

“I am grateful to her for that. In the past 30 years, I have traveled across the world, participated in all international championships…  With the opportunity given to me by Didi, I will try to serve people through politics. To me, India is about democracy, and not about a particular caste or religion,” he added.

Mamata said: “I was the sports minister of the country when I (first) met him, I have got my younger brother in the TMC.”

Nafisa (64), is also Kolkata-born, like Paes. Her father was Ahmed Ali. Like Paes, the 64-year-old Nafisa, too, was born in Calcutta. She became as famous a swimmer as she was a beauty queen. The acting was a natural move from there.

In the end, though, it has been good press so far. That is the main gain from this exercise. For the rest, one has to wait.