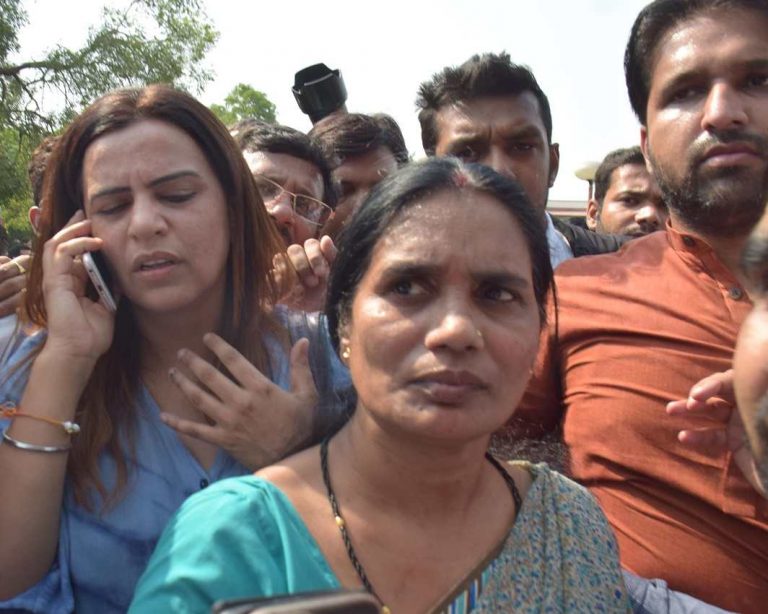 Victims’ parents break down in tears, as all hail path-breaking verdict

Describing the Nirbhaya gang rape-murder case as an act of “inconceivable brutality” and commenting that “if at all a case warranted death sentence it’s this case, where human lust was allowed to take demonic form,” the Supreme Court on May 5 upheld the death sentence on all four remaining accused, bringing to a just end a 53-month wait of her parents and all of the country.

As the parents, who had attended every single hearing for over four years, broke down in tears in the court, every single person in court was praying for Jyoti, or “Nirbhaya”, as she was called for long to protect her identity.

The counsel for the accused, AP Singh, said a review petition will be filed.

The country was expecting to get this death sentence from the bench of Justices Dipak Misra, R Banumathi and Ashok Bhushan this day, after a long wait.

Amid applause from all present at the Supreme Court on May 5, the court said: “It’s a tsunami of shock in the minds of the collective and destroyed humanity. Death for all four. [We have been] Compelled to arrive [at] aggravating circumstances [that] outweigh the mitigating circumstances.”

Immediately after lunch, when the bench sat at 2 pm, Justice Misra started reading the judgment: “It was a devastating hour of darkness for the 23-year-old paramedic. The victim’s parts were ruptured to give vent to the sexual desires. Lying naked they shouted for help as good fortune have it a night patrolling vehicle arrived.”

The judges thereafter made the following observations:

“We analysed many facets like delay in lodging FIR, CCTV footage, reliability of witness, insertion of iron rod, sentencing policy.” The judges said that after having seen all this they concluded that “the juvenile was present in the bus. There is no reason to disregard his presence. Arrest of accused has been proved by the prosecution and custodial confessions. Dying declaration (of Nirbhaya) was proved beyond reasonable doubt. Presence of accused in the bus is a crime.”

Regarding the appeal filed about mitigating factors, the court said “emphasis has been laid on young age, but we also looked into the kind of crime committed by them.”

The court said the DNA on the accused matches that of the victim. It said that the high court had correctly given stress on DNA. The court also observed that “there is manipulation by the investigation team during investigation.” This was a serious observation.

Then came the crux of the observations. “Prosecutrix Demonstrate that [the] entire intestine of victim was perforated. Various bite marks. This proves inconceivable brutality committed on the victim. We are compelled to come to conclusion that the High Court has correctly held the death penalty.”

Said Justice Bhanumathi: “Bearing in mind all principles, a crime like this cannot be looked at with magnanimity. The ordinary background of the accused cannot be treated as mitigating factors. The case is rarest of rare case. It is a matter of human rights now. Stringent legislations cannot be only way to stop these crimes. Gender sensitisation has to be promoted through media and other platforms. Everyone should fight for gender equality and justice.”

The Nirbhaya gang rape and murder case finally reached its end 1,601 days after the horrific incident that happened in Delhi on the night of December 16, 2012.​