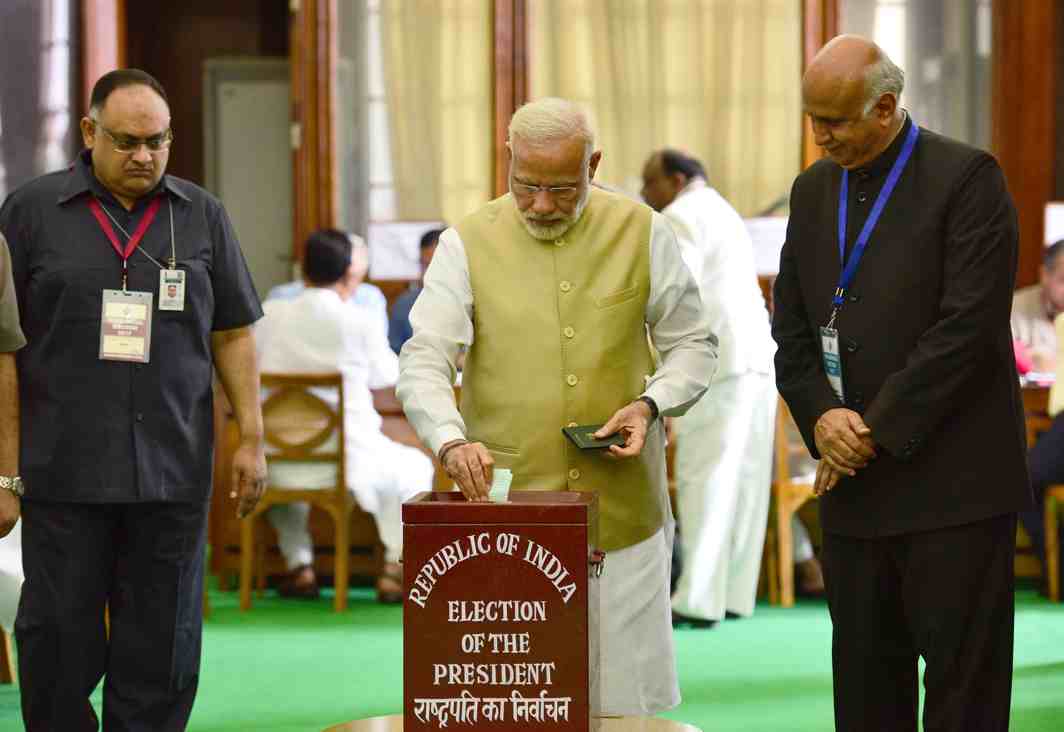 Above:  Prime Minister Narendra Modi casting his vote in the Presidential election in New Delhi on July 17, 2017. Photo: PIB

A Presidential election in India isn’t straightforward or clinically as per party whip (there, in fact, is no “whip” associated with this). Floor crossings have happened in the past and it is expected that the same would happen this time too. The two main candidates for Presidency, the NDA-supported Ram Nath Kovind and the Opposition’s Meira Kumar were witness to the process at Parliament and at several assemblies across the country on Monday (July 17).

The result will be announced on July 20.

However, on Monday, while senior NCP leader Praful Patel (once part of the UPA as civil aviation minister), said at Parliament House Complex that “there is no rocket science, Ram Nath Kovind will win today,” the NCP was also rife with rumours that some of its MLAs and MPs had indulged in cross-voting. The official NCP line was that the party stood firmly behind UPA candidate Meira Kumar.

Sources also said that a large breakaway section of the Samajwadi Party voted for Kovind.

Patel justified his comment by saying: “All MPs don’t necessarily vote only according to conscience, they also vote according to party lines and party lines are divided somewhat on ideology, principles and political positioning. So, I don’t read too much into any other statement, except the fact that this is a clear case of the NDA scoring big in terms of the numbers.”

However, NCP spokesperson Nawab Malik has been quoted as saying: “The rumours that NCP MPs and MLAs are voting for the NDA presidential candidate are false. We are voting for our candidate Meira Kumar.”

On Sunday, Prime Minister Narendra Modi had said that Kovind has the support of 40 parties and would win with ease. He said he would be delighted to work with Kovind.

President Pranab Mukherjee, meanwhile, made it clear that after his presidency was over he would be back as an ordinary citizen. That was possibly an indication that he would be fully retired from politics.