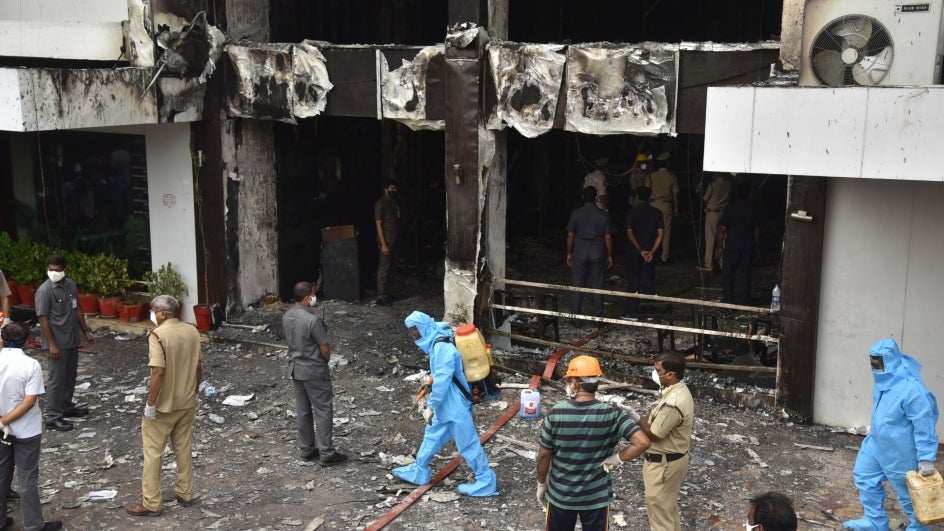 New Delhi: The Supreme Court has ordered recommencement of investigation into the fire tragedy in Vijayawada’s Covid-19 centre. The executives of Ramesh hospital are to be investigated in the case of the outbreak of fire August 9 which resulted in the death of 10 patients. The investigation will look into the alleged violation of government’s safety regulations by the authorities of Ramesh Hospital, which had leased the hotel where the fire outbreak had taken place.

A bench led by Justice Rohinton F. Nariman issued the direction while hearing a plea filed by Andhra Pradesh government seeking a stay on the High Court’s order to the extent that it suspended proceedings against Dr Pothineni Ramesh Babu, the managing director of Ramesh Hospitals.

The court directed stay on part of the high court’s order but also asked that respondents, Dr Ramesh Babu and Mohan Rao will not be taken for custodial interrogation if they cooperate fully with the police. The court said that authorities may approach the courts in future for pre-arrest bail and appropriate orders can then be passed.

During the hearing, Senior Advocate Mukul Rohatgi, on behalf of the government, had argued that the high court couldn’t have stayed the investigation even before the examination of the documents relied upon by Dr Ramesh Babu and such relief to a man who had been absconding and not cooperating with the investigation from the very beginning could not have been given.

Senior Advocates KV Vishwanathan and Shyam Divan, who appeared on behalf of Dr Ramesh Babu and Chairman MS Rama Mohan Rao, contended that doctors and executives of the hospital cannot be charged for culpable homicide not amounting to murder for any lapses on the part of the hotel. Furthermore, the centre was a licensed enterprise, and was also identified by the government itself.