Senior Advocate Pradeep Rai, the Vice-President of the SCBA, congratulated the bar members for their valuable efforts and services in remembering Guru Nanak Dev, the founder of the Sikh faith 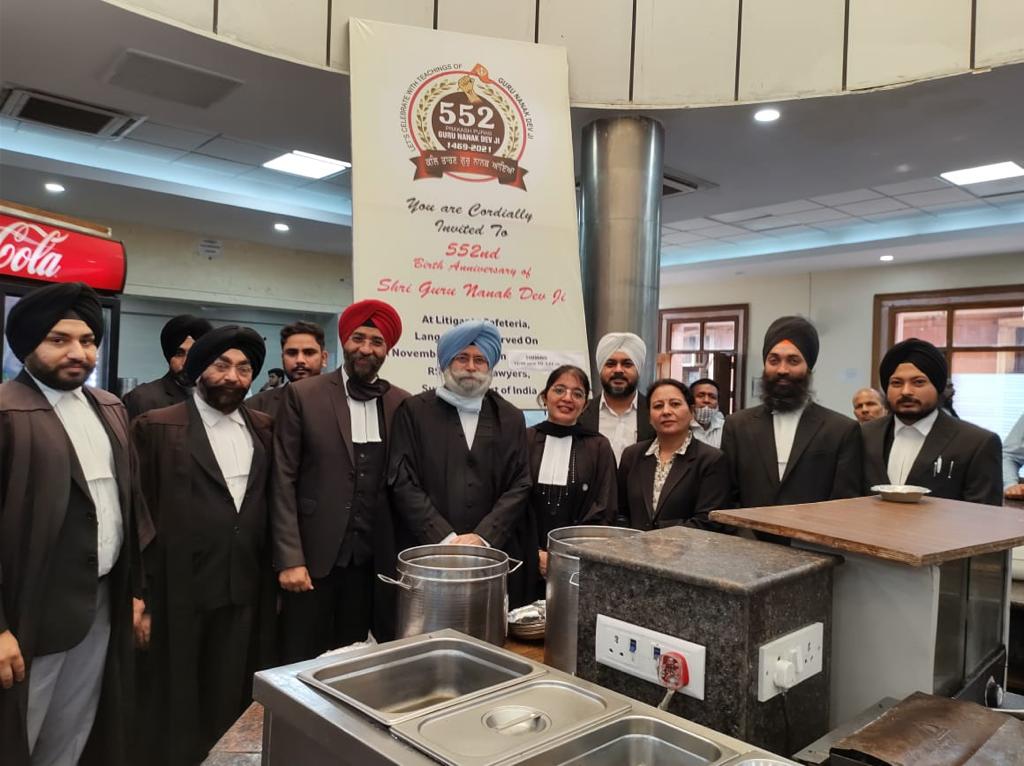 Sikh advocates and members of the Supreme Court Bar Association (SCBA) on Wednesday organized a Langar Seva in the Supreme Court’s litigant’s cafeteria on the auspicious occasion of Gurpurab, the 552nd birth anniversary of Guru Nanak Dev.

Senior Advocate Pradeep Rai, the Vice-President of the SCBA, congratulated the bar members for their valuable efforts and services in remembering Guru Nanak Dev, the founder of the Sikh faith. He said the blessings of the Guru Nanak Dev are always with us.

Lawyers from the Sikh community in the Supreme Court said, “We sincerely thank all the esteemed office-bearers of the SCBA, including its President Senior Advocate Vikas Singh, Vice President Senior Advocate Pradeep Rai and Hony. Secretary Ardhendumauli Kumar Prasad. We would also like to thank Rupinder Singh Suri sir, H.S. Phoolka sir and Jagjeet Singh Chabra sir and many more for their gratitude and good wishes.”

The date of Gurpurab varies year to year as per the lunar calendar. While Diwali falls on the 15th day of the Kartik month as per the Hindu Lunar calendar, Guru Nanak Jayanti falls 15 days later on the auspicious Kartik Purnima. This year, the Gurpurab will fall on November 19.

Guru Nanak Dev was the first of the Sikh Gurus. He was born in 1469 at Nankana Sahib. It is believed that his birth was a mark of divinity. His birth anniversary is celebrated worldwide on Kartik Purnima as per the lunar calendar. Sikhs believe Guru Nanak Devji brought enlightenment to this world.

Guru Nanak Dev firmly believed that an individual could connect to God through sincere prayer. He didn’t encourage traditions that included sacrifices. All his teachings and preachings are composed together to form the sacred Guru Granth Sahib. It is the central holy religious scripture of Sikhism, regarded by Sikhs as the final, sovereign and eternal Guru. The main verses from the Guru Granth Sahib elaborate that the creator of the universe was one. The verses also preach selfless service to humanity, prosperity and social justice for all, irrespective of differences. Guru Nanak Jayanti is celebrated to honour Guru Nanak Dev’s life, achievements, and most importantly, his legacy.