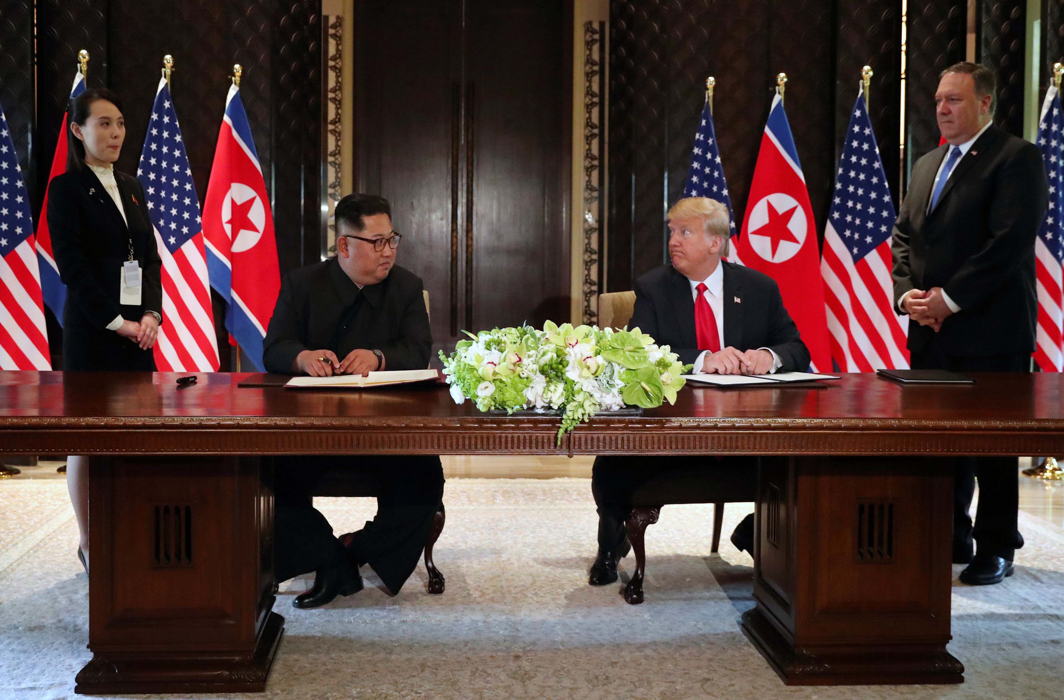 Above: U.S. President Donald Trump and North Korea’s leader Kim Jong Un look at each others before signing documents that acknowledge the progress of the talks and pledge to keep momentum going, after their summit in Singapore June 12, 2018/Photo: UNI

Following months of posturing on either side, US President Donald Trump and North Korean dictator Kim Jong Un on Tuesday (June 12) signed a comprehensive joint document at the Capella resort on Singapore’s Sentosa Island with Kim Jong Un committing ‘complete denuclearisation of the Korean peninsula’. Despite the bad public ratings of Trump throughout his presidency, this historic pact is sure to give the US and other countries some peace.

This was the first ever meeting – one that has been watched closely throughout the world – between any American president and Kim. Quite adhering to his fickle moods, Trump, who has been calling Kim the “Little Rocket Man” all along, now has said that Kim was “a very talented man” who loves his country very and said that they have seemingly “developed a very special bond”.

Kim, on his part, called it a “historic meeting”, vowing to leave the past behind. The meeting was held at a luxury hotel on the island.

The pact seems a win-win for both countries, with the United States seemingly having defused a huge nuclear threat in the Asian region, while North Korea, so far a pariah state, getting the huge opportunity to integrate with the rest of the world and open its markets to huge potential from outside.

China praised the summit as historic and called for “full denuclearisation” to resolve tensions on the Korean peninsula, say reports.