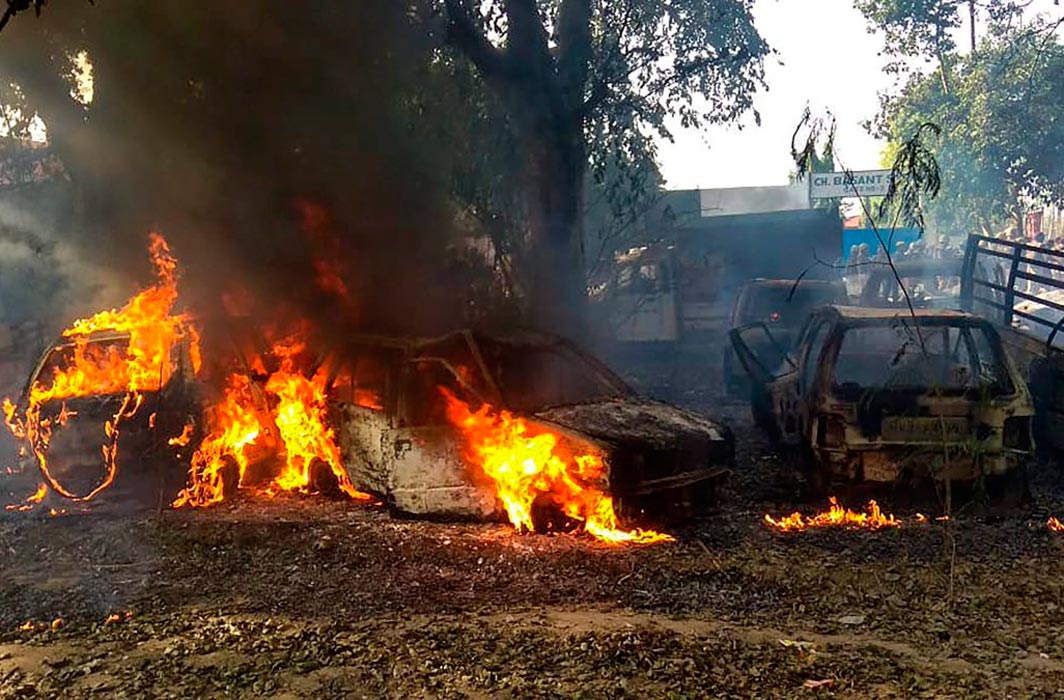 Taking time off from his election campaign for the BJP in neighouring Rajasthan to to hold meetings with his officials in the aftermath of the Bulandshahar riots, the least that was expected from Uttar Pradesh Chief Minister Yogi Adityanath was to seek a report on the violence and order a probe .

Instead, he chose to tread the familiar anti cow slaughter path. A Police inspector and a 20-year-old man  had died of gunshot wounds when a mob went on rampage over alleged cow slaughter on Monday but the chief minister, in his meetings with senior officials said the incident of alleged cow slaughter in the western uttar Pradesh town was part of a “larger conspiracy”.He asked top officials to take “tough action” against those involved in cow slaughter , a government statement said, adding “the incident is part of a big conspiracy and all those involved in cow slaughter, directly or indirectly, should be arrested in a time-bound manner,”. “The Chief Minister also instructed all District Magistrates and district police chiefs to implement anti-cow slaughter laws and the shutting down of illegal slaughterhouses in the state, a decision taken by him after coming to power in March, 2017. The officials have also been told to run a campaign to “expose” those “element spoiling the atmosphere” and take effective action against those involved in “plotting the conspiracy.”

And off he went again, this time to campaign for the BJP in poll bound Telengana.

Meanwhile three leaders from the Bajrang Dal, Vishwa Hindu Parishad (VHP) and BJP have been named in the FIR lodged by police in the violence that rocked Bulandshahr. Newsagency IANS reported that VHP activist Upendra Raghav, BJP city youth wing President Shikhar Agarwal and Bajrang Dal district coordinator Yogesh Raj have been named in the First Information Report in the wake of the violence on Monday. The police have also arrested two villagers while five more have been detained in connection with the violence that broke out after some animal carcasses were recovered which right wing groups said were cows. Inspector Subodh Kumar Singh tried to reason with the demonstrators and persuade them to clear the traffic jam they had caused, he was attacked with blunt objects and then shot.A young man was also killed in firing.

Delhi HC dismisses petition of 11, who wanted to file nomination against Kejriwal