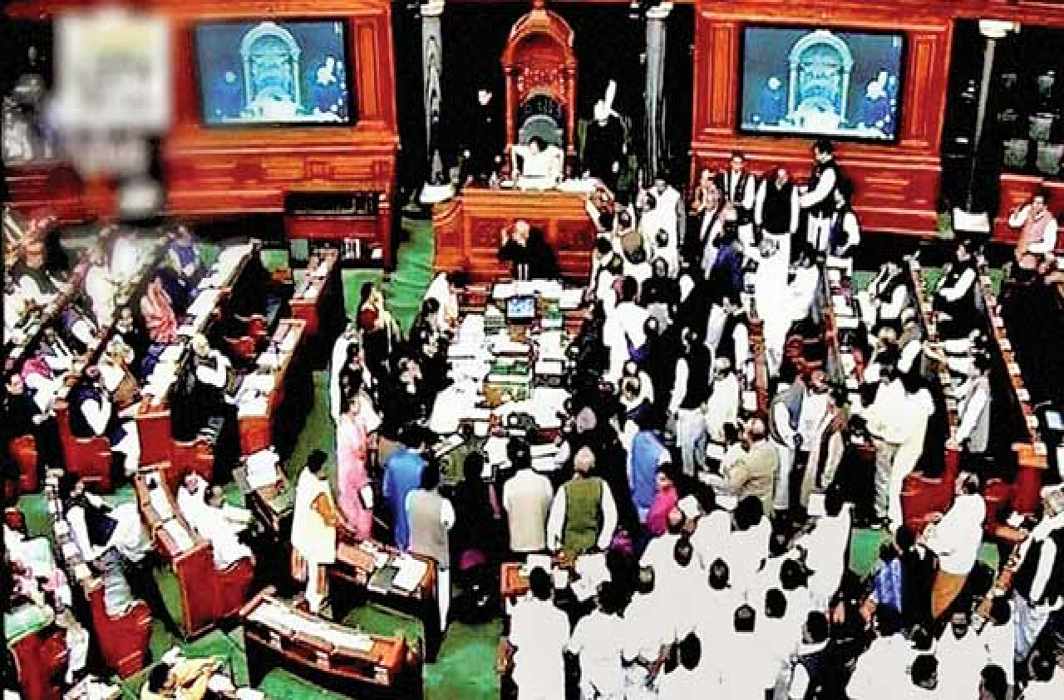 Both Houses of Parliament were adjourned till 2 pm amid ruckus, Sushma Swaraj says she will make a statement in Parliament on Thursday about Jadhav’s meeting

For the seventh consecutive sitting of Parliament’s winter session, a stalemate in proceedings continued on Wednesday as Opposition members creating a ruckus in the Lok Sabha and Rajya Sabha.

While until last week the logjam in both Houses was over the NDA government’s persistent refusal to concede to the Congress-led Opposition’s demand for an explanation from Prime Minister Narendra Modi over his unsubstantiated ‘conspiring with Pakistan’ claim against his predecessor, Dr Manmohan Singh, Wednesday’s stalemate was in two key issues.

The Lok Sabha saw uproar over the shoddy treatment faced by the mother and wife of Indian national Kulbhushan Jadhav at the Pakistan Foreign Office in Islamabad earlier this week. Jadhav has been accused of being an Indian spy and is imprisoned in Pakistan while efforts by the Indian establishment for his release are afoot at the International Court of Justice in The Hague.

The Rajya Sabha too witnessed a ruckus created by the Opposition members over the recent controversial remark by Union minister for skill development, Anant Kumar Hegde, wherein he had claimed that the BJP had come to power at the Centre to “change the Constitution”, indicating that his party wanted the word ‘secular’ deleted from the Preamble. Hegde had also slammed “secularists”, claiming that “they do not know their parentage”.

Both Houses saw the Opposition hit out at the Centre over the two controversies. In the Lok Sabha, Union minister for external affairs said that she would be making a statement in Parliament on Thursday giving a detailed account of the meeting between Jadhav and his mother and wife. However, Swaraj’s assertion failed to pacify the Opposition members. Lok Sabha Speaker Sumitra Mahajan was forced to adjourn house proceedings twice – first soon after the House convened for Question Hour and then again shortly past noon. The House is set to reconvene at 2 pm. Though the government has listed four Bills, including the GST (Compensation to States) Amendment Bill, for consideration and passing, it appears that the day’s proceedings – like those since the winter session commenced on December 15, will be a wash out.

In the Rajya Sabha, Opposition demand for the government to clarify its position on Hegde’s obviously objectionable remarks forced Chairman Venkaiah Naidu to adjourn the proceedings till 2 pm after minister of state for parliamentary affairs, Vijay Goel’s submission that the government and the BJP did not endorse the Union minister’s views failed to appease the protesting MPs. Three Bills have been listed by the Centre for consideration and passing by the Rajya Sabha on Wednesday, but their fate too now hangs in balance in light of the logjam.