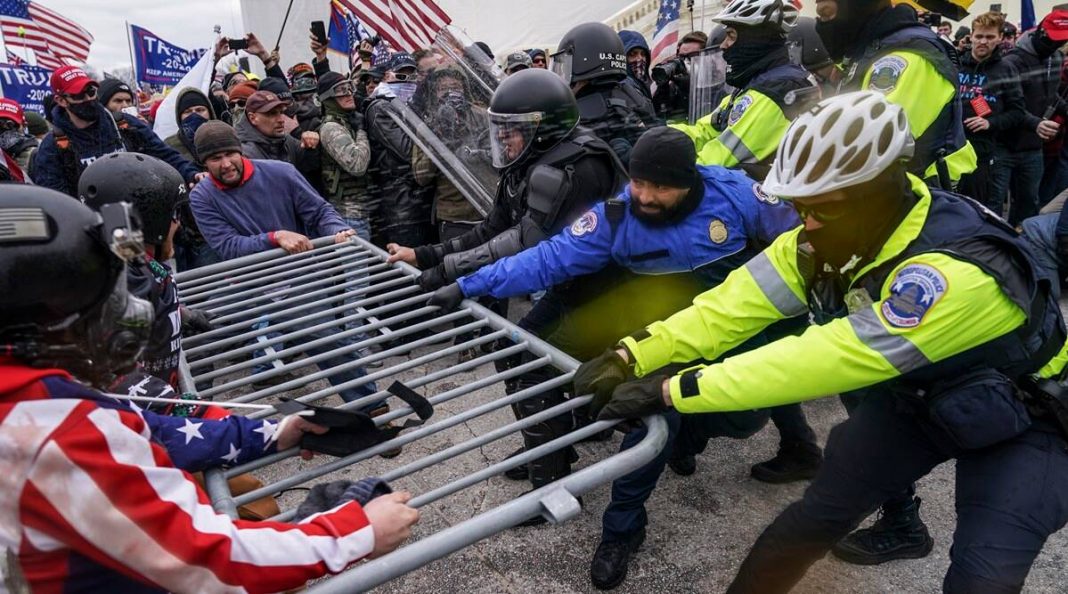 When a mob invaded the US Capitol’s House and Senate chambers on Wednesday America’s belief that it is an exceptional democracy ended. None other than President Donald Trump had suggested to an army of his supporters that they march from the White House to Congress to protest the certification of the Electoral College results, a pro forma event that officially makes Joe Biden the 46h president on January 20.

What was slated to be a protest march (#StopTheSteal and #MarchForTrump) turned into a riot as Trump supporters broke into the House and Senate chambers and roamed the halls of the capital complex, while others surrounded the building. A largely outnumbered contingent of Capitol police mostly stared at them. Inside 100 Senators and nearly 435 Representatives along with Vice President Mike Pence and support staff were eventually hustled to safer places by Secret Service and police who were inside the building.

It took all afternoon for the various law enforcement groups called to the scene to arrive. Meanwhile, the crowd waved flags and Trump banners shouting epithets at the police. The crowd of largely mask less folks milled around as if they were at a championship football game. The law and order mantra of Trump and his supporters was missing in action even if some folks waved Blue Lives Matter flags.

In late afternoon Trump finally recorded a message for network television channels asking the protestors to leave the Capitol. However Trump first told his supporters, “I feel your pain,” claiming he won the election in a landslide but had it stolen – the same baseless claims he has made since losing the popular vote election 60 days ago. Calling the mob  “special” he said they should now go home in peace.

Trumps speech proved meaningless. About three hours after this insurrection started a large contingent of law enforcement officers began to seriously disperse the crowd as a curfew was issued for 18:00 on Washington’s stets.

House Speaker Nancy Pelosi later announced that the House and Senate would reconvene at 20:30 to finish the pro forma presidential certification process including limited debate.

All of this came on the same day the results from Georgia’s runoff elections sent two Democrats to the US Senate, giving Democrats majority control, which will greatly aid Biden’ ability to get things passed and done.

There is irony everywhere today. Trump’s presidential term started with no incoming transition plan, lots of chaos and no respect for tradition. His operating approach depended on deflection, denial and delay when things went wrong. Remember the medical crisis where he delayed, deflected and claimed no responsibility for a pandemic that has killed more than 350,000 people in America and is getting worse not better.

Twitter has locked his account for at least 12 hours so we don’t have his assessment, what we have from all corners of the US and global political and media sphere is condemnation and worry about what Trump might do in his remaining 14 days in office.

Viewing today’s experience was a humiliating experience for most Americans and for people around the world who have admired the USA for political stability.

A longtime Washington journalist and Congressional insider saw another aspect. Jim Jaffe, with decades on House committee staff, felt that President-elect Biden’s comments including “Stand Up Mr. President” were precise, measured and reflected American values. Biden said, “Our Democracy is under unprecedented assault.” Jaffe’s point is that today’s display of domestic terrorism strengthens Biden’s approach because it shows people what happens when you let a narcissist president do what he wants. He says, this will change the conservatives in elected office who have felt first hand the fear generated by mob rule.

Majority control in a 50:50 Senate comes because the rules reflect Vice President Kamala Harris’ role as Senate President with tie breaking responsibility. So Democrats  will control committee assignments and nominations, meaning  more may get done in the first six months than anyone thought possible a few weeks ago.

The Capitol police working with the Metropolitan DC police seemed  out of their depth as this event mushroomed into something  they should have anticipated. It is reported that Trump was reluctant to invoke the National Guard so Vice President Pence did it. The day’s law enforcement failures will provide one more issue for the new administration to handle immediately.

The Congress reconvened at 8:30 in their chambers. Senate Majority Leader Mitch McConnell said the insurrection by unhinged thugs failed, adding  “We are going to work together.” Oklahoma Senator James Langford, one of the Republican objectors, said the proposal for a commission to investigate claims of voting fraud is off the table.  The discussion will probably deal only with Arizona ballot security, the case in progress when the riot broke out. The absurdity of this performance art in a Congressional matter is obvious since some of the strictest voting procedures in the USA are in Arizona.  Senator Mitch Romney, who had once lost a presidential race said,

“No Congressional audit is ever going to convince these people so long as the president keeps telling them he won. The best way to show respect for the voters is to tell them the truth.”

The actions of the day have sobered up some of the most loyal and critical Republicans who have been carrying  water for the president. Democrat Chuck Schumer, about to  become majority leader, said January  6 would live in infamy along with President  Roosevelt’s description of December 7, 1941, the  Pearl Harbor Attack as a day of infamy for the USA.

There are two weeks left in Trump’s presidency. There has been sufficient evidence for nearly four years to suggest how bad things could become. Politicians who have hidden behind a ‘see no evil, hear no evil’  response to Trump’s  behavior brought the nation to this unprecedented spasm of authoritarian-inspired violence.