The PM Who Unshackled the Elephant 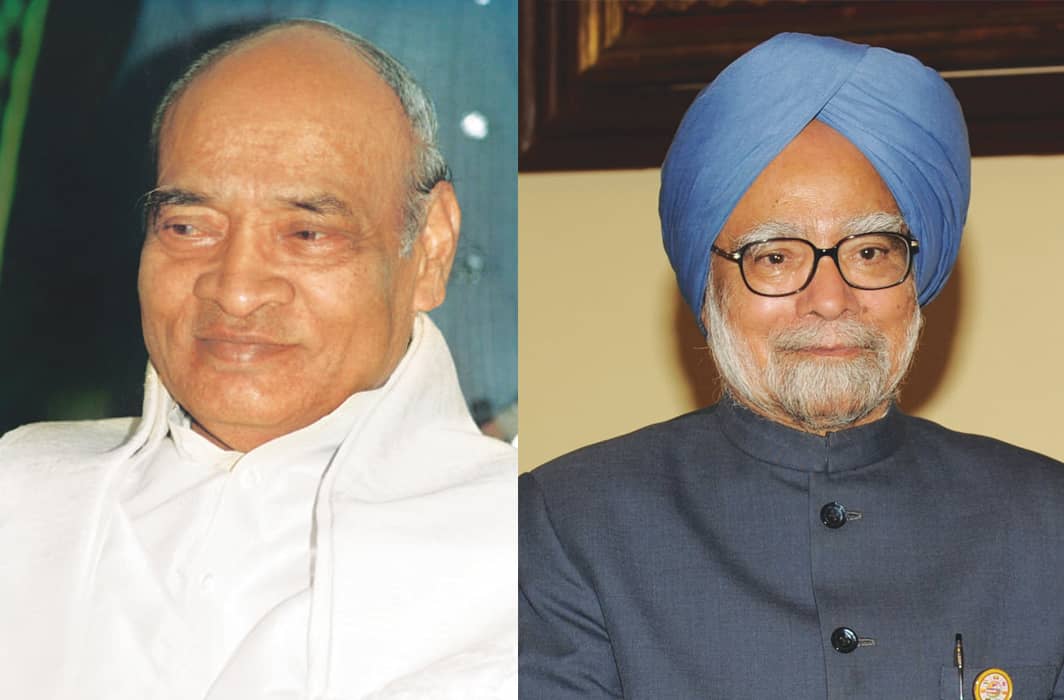 On the occasion of Prime Minister PV Narasimha Rao’s centenary year which began on June 28, it is time to look at his legacy. It was 29 years ago that he abolished the license raj and initiated economic reforms with a human face. This transformed India into a power to be reckoned with. Here’s an insider account of those heady days by Rao’s information adviser, S Narendra

July 24, 1991. It was on this day that the powerful chains controlling India’s economic elephant were unshackled by Prime Minister PV Narasimha Rao. Without much fanfare, not even a ministerial press conference, the industry ministry he was in charge of, announced the abolition of the Industries (Development and Regulation) Act (IDRA), 1951. All licensing of new industries, barring a few sectors put in a negative list, was removed. The “licence-permit raj” of nearly 40 years had ended, marking the beginning of massive economic reforms and the movement of ease of doing business (EODB).

Indians born after this date do not know what it was like if anyone wanted to start a business under IDRA. It was the mother-goddess of a web of restrictive laws and regulations constricting innate Indian enterpreneurship. The following would give a glimpse of how government controls worked.

Before this date, if one set out to be an entrepreneur, he had to first obtain a hard-to-get licence from the government to start any business. Then he had to apply to the government for approval for importing machinery and equipment (if they were not available in India), and that was the case in most instances. He also had to satisfy official regulators that the technology was unavailable in India. A further hurdle had to be crossed if he had to buy the equipment/technology abroad as he had to obtain a rarely given foreign exchange permit.

The most difficult licence to get was when an industrialist wanted to raise capital from the stock market. It was the government that decided how much capital he could raise, what to produce and how much. A whole range of bureaucratic institutions such as the Monopolies and Restrictive Trade Practices Commission, Directorate General of Technology and Development, Import and Export Controller and others could at any time interfere with any entrepreneurial activity. A government-appointed committee (Hazari Committee) in the 1960s had revealed that a handful of business houses with political connections had managed to corner a large number of the industrial licences in order to block competition, but had made no investment for production of licensed goods, thus creating shortages and a sellers’ market.

In the early ’80s, Texas Instruments, then the world’s leading maker of calculators and electronic business machines, wanted to start production in India, in the so-called Special Economic Zone at Santa Cruz, Bombay. After a wait of 18 months, the Indian licensing authority permitted them to make less than 5,000 machines because in the official mindscape, that was the size of the expected market for calculators, officially regarded as a non-essential item.

This tale of woe was narrated to Finance Minister VP Singh (I was present as a foreign news reporter) who was visiting Hong Kong for an investors’ conference in 1984. An NRI from Hong Kong narrated his experience of operating an export production unit in the Santa Cruz Export Processing Zone (EPZ). According to him, it took him weeks to import vital components going into an electronic product. And before he was allowed to export anything from this dedicated EPZ, he had to grease the palms of several customs officials. On the other hand, his export-import firm in Hong Kong was able to import an item required for making any electronic equipment all the way from Latin America. What is more, the final product with the imported part fitted in could be exported by him to Australia in a matter of five days.

India’s official policy then did not allow soaps, detergents, radios or TVs to be marketed under foreign brands. This was part of a severe import substitution and “self-reliance” (self-denial?) policy. Most consumer durables production was reserved for small-scale industries which did not have the scale and technology advantage. But in an economy of shortages, the consumer had little choice.

Typical of the prevailing mindset was the declaration in a government budget (1970) that refrigerators and air conditioners (even bread) were “luxuries” deserving prohibitive taxes. Electronic media advertising of such products and jewellery was banned as part of shunning items of conspicuous consumption. Only public sector companies could be named in government-controlled news media, not private companies. Investment bankers and stockbrokers did not have free access to economic and financial news from across the globe under an official restriction. And there were a host of other such policies, ostensibly to promote domestic entrepreneurship.

Decades later, India was and is being celebrated as the centre for manufacturing innovations and a global IT hub. Foreign exchange reserves that hovered around a few million dollars in 1991, requiring India to pledge its gold reserves for staving off a default in paying interest on foreign loans and to meet the cost of importing essential goods such as petroleum, oil and lubricants, have grown to about $300 billion.

After the opening up of the economy by scrapping IDRA and other bold steps, India showed that it could grow annually at 8-9 percent and close the economic gap with China. This new India now gets invited to the international high table such as the G-7. It caused the coining of the acronym—BRICS (Brazil, Russia, India, China and South Africa)—exciting (for a while) investors and marketers as these economies were perceived as potential engines of global economic growth.

The bold economic reforms, which opened up the economy to the private sector and foreign direct investment, as some of Rao’s critics point out, was undertaken for averting a financial crisis caused by a severe balance of payments imbalance. The difference between Rao’s government and predecessors was that the latter in similar situations went to the International Monetary Fund (IMF) for a bailout. They accepted IMF’s loan conditions which required the government to reduce its controls over the economy. But at the first sign of easing of the crisis, the predecessor governments reverted to their old ways. Prime Minister Rao, on the other hand, swiftly removed government controls over businesses. Further, he gave political backing to his finance minister, Dr Manmohan Singh, to implement fiscal and taxation reforms, and unprecedented changes in export-import policies by Commerce Minister Chidambaram.

Writing about the abolition of the licence raj, Financial Times of London wrote: “One of the most fragile governments in India’s history has, paradoxically, started to make the bold economic policy changes that not even Rajiv Gandhi’s ostensibly the more stable administration could (not) risk.”

Although Rao’s five-year tenure witnessed policy reforms across most economic sectors, he chose not to be the voice and face of those vital policy im­pulses. This was not just part of his strategy to deflect criticism of reforms away from himself, but due to his deep conviction that the reforms, which could put at a disadvantage large sections of the people, could destabilise both the core reforms underway and the democratic political system. Very early in his tenure, in 1991, he told the World Economic Forum, an assembly of wealthy investors, that economic reforms and globalisation should work for the building of a more humane and caring society.

Revisiting the same forum in 1994, Rao propounded his “middle path” which simultaneously allowed market orientation of the economy and offered protection to the poor and others who were likely to bear a bigger economic burden due to the change. From mid-1992, he substantially increased the expenditure on rural development, asked for setting up a National Renewal Fund for assisting workers who were likely to be affected by disinvestment, made the school midday meal programme a national central scheme and put in place the Employment Assurance Programme that later became MGNREGA. He cautioned against sudden withdrawal of farm subsidies. It was his government that laid the groundwork for the national highways programme by setting up the National Highways Authority of India and paved the way for Prime Minister Atal Bihari Vajpayee to take it forward. The thrust was on employment-intensive sectors such as food processing linked to modern agriculture and infrastructure. EODB was a work in progress that began with the scrapping of IDRA. In Rao’s own words, the direction of economic change had been set and was irreversible, but the pace could vary.

The prime minister’s Congress party was unhappy with the opening of the economy. The Left parties, BJP and sections of the industry and business were not only critical of Rao’s reforms but had also launched a campaign opposing India’s entry into the World Trade Organisation, requiring changes in several outdated laws like the Indian Patent Act, Copyright Act and the Indian Telegraph Act.

As the prime minister’s information adviser, I was concerned about this. I did suggest that he appoint a separate industry minister so that there was a buffer between the criticism of the industrial and investment policy and the prime minister. Rao’s unexpected response was that if he were to appoint a separate minister, the latter would try to make his role more important by controlling industry. He added: “I want industry to be important, not this ministry or the minister.” After holding this portfolio for three years, he did induct an industry minister (Kerala leader K Karunakaran). Soon after taking office, the latter wanted the Foreign Investment Promotion Board to be placed under his ministry and showed reluctance to carry out further deregulation and opposed steps for disinvestment in government-owned companies.

It was Rao who gave the call for economic reforms with a human face. He went before the World Economic Forum (WEF) and argued against demands by rich countries for unrestrained globalisation of emerging economies like India. Some 20 years later, the same WEF was forced to recognise the wisdom of Narasimha Rao’s words in the face of protests against globalisation that had made the rich richer and the poor poorer. The WEF meeting at Davos in 2010, after the global financial crisis, said in its report that economic globalisation should be “inclusive” (not leave the poor behind).

—The writer is former information adviser to the PM