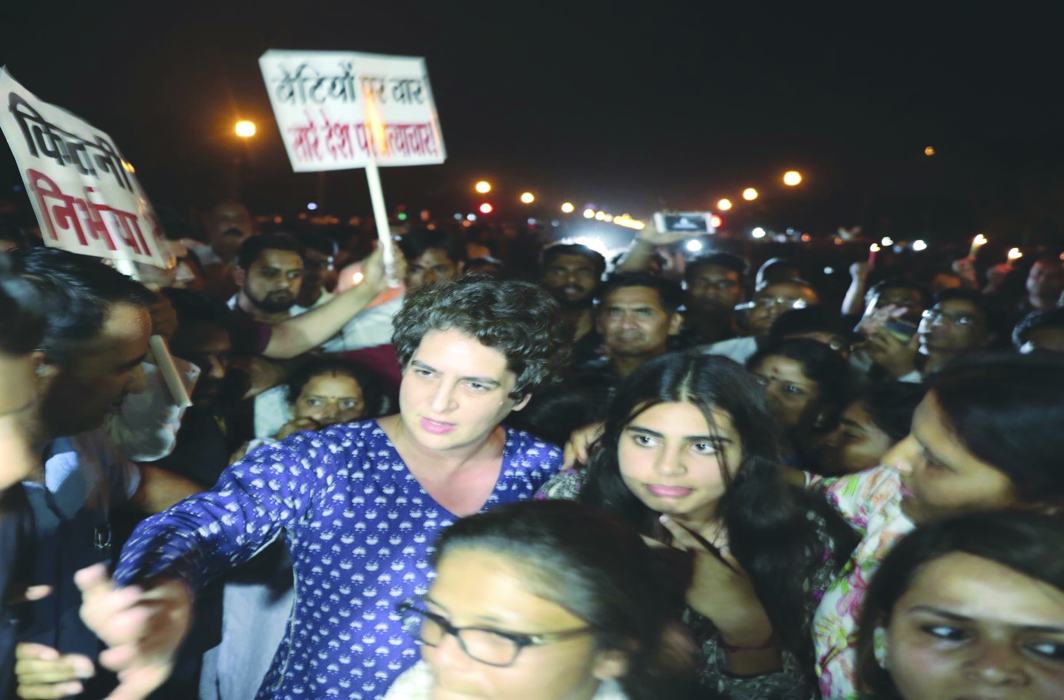 Priyanka Gandhi at a protest march in Delhi. Photo: UNI

This week has been one of the darkest in India’s contemporary history. The nation has been witness to the shocking, nauseating details of the rape of two girls, one an eight-year-old child and the other a teenager. More sickening than the actual crime is the manner in which politicians, policemen and even lawyers have attempted, openly and brazenly, to shield the accused. Despite the horrific and brutal nature of the crime, and the national outrage it inspired, it was only after a barrage of criticism that the prime minister broke his silence with a statement. The silence of the bigwigs was as damning as the evidence regarding the perpetrators of the rapes that have shamed this nation beyond all the love jihads and lynching of minorities.

Even UN secretary general Antonio Guterres termed the gangrape and murder in Kathua as a “horrific” incident and asked Indian authorities to ensure that the guilty were brought to justice.

There is now a madness gripping this country, fuelled by motivated and manufactured hyper-nationalism, horribly misplaced Hindu pride, misogyny and the perpetual curse of India’s caste system. That has been reflected in our politics, where hype and hysteria and abusive exchanges have become the new normal. This week’s events should be cause for national mourning, yet there are so few tears, so little remorse, and, chillingly, no repentance or regret on the part of those sick, twisted minds who destroyed the life of one and took the life of another innocent girl. It was, in the end, not the rape of innocent girls, it was the rape of India.

If there is any consolation, it is in the fact that the Supreme Court has agreed, of its own accord, to take up both the cases and wants it mentioned in writing that the lawyers in Kathua, in Jammu, agitated to prevent the filing of a chargesheet against the rape accused and, additionally, that these lawyers threatened those representing the family of the eight-year-old who was raped.

The second case is more revealing of the depths we now occupy. It took place in Unnao, in India’s most populous state, and the main accused is a legislator who belongs to the ruling dispensation. Just reading the account of how the teenager was raped, in September last year by Kuldip Singh Sengar, a powerful upper caste politician, how the police refused to act, her attempt to commit suicide outside the house of the chief minister, and the subsequent death of her father, tortured in police custody, is a reality check for those who believe that ache din are here, that “Beti Bachao, Beti Padhao” was a commitment, not a slogan, and that saffron-clothed politicians like Yogi Adityanath are God’s chosen ones.

This is now the age of hate-mongers. It is also the age where competitive communalism and the unending patriarchy of Indian society can provide a cloak of invincibility to its practitioners. Just read, if your tears allow you, the details of the Kathua rape, an act of such perversity that it actually took place inside a temple. There is a police chargesheet which, even in its stilted, formatted language exposes the barbaric and medieval culture that survives in many parts of this country. It details how a little child from a nomadic community had taken her family’s horses to graze in a nearby forest and never returned. She was drugged, taken to a local temple, and eight men, including local policemen, raped her repeatedly. One of them even invited a friend from Meerut, hundreds of miles away, to take part. The eight-year-old child was strangled and then hit over the head till she was dead.

For all those who have remained silent and indifferent to the rapes, and what is taking place around us, I have one request. Look at her photograph. This is the carefree innocence of a child, the eyes full of hope and laughter and the promise of tomorrow. Her father says she was mischievous but responsible enough to stay out late in the forest to ensure every horse and sheep they owned had reached home. The bigger tragedy is the communal contours of the case. The girl was a Muslim, a minority in Jammu. Immediately after the rape, a self-appointed Hindu group staged demonstrations in support of the rapists, and, predictably, raised nationalist slogans and waved the national flag. That one act shows the impact of the hate mongering—fuelled by hyper and TRP-chasing television anchors, politicians and right-wing activists. The flag conceals and covers all sins, or so they believe. It would be difficult to find a greater level of depravity than to communalise the rape of a child.

There are places and events which are signposts to the direction we as a nation and a people are taking. Nellie, Babri Masjid, Bhopal, the Emergency, Godhra riots, 26/11, Nirbhaya. They are reminders of man’s inhumanity to man. That list now includes Kathua and Unnao. They hold up a mirror to our darkest side, as people, and as Indians. There is much wailing and breast-beating on social media but very little angst. Angst refers to a feeling of anxiety or dread, typically about the human condition. Now is that time. If the events of the past week, and the muted reactions, are any indication, we have lost the one thing that defines us as a species—our humanity.