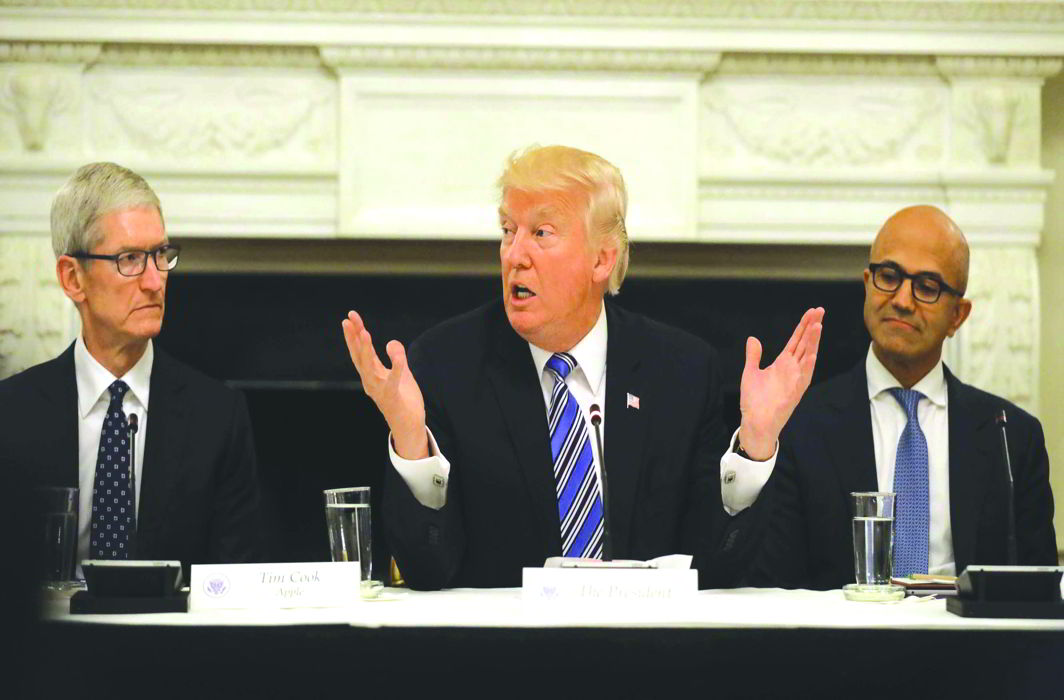 If net neutrality is such an important issue, why do millions of internet users in the US and around the world have no understanding of how it works and don’t care as long as their current ISP (Internet Service Provider) supplies the bandwidth (speed) and data promised for the agreed-upon price? They should because the smartphone has convinced mobile phone companies that there is more profit in data than in voice phone calls.

The attack on net neutrality is consistent with the Trump Administration’s efforts to roll back regulations it says hamper business. With low interest rates and a super-high Dow Jones stock average of around 23,000, it seems fair to ask what is hampering business?

In the novel, 1984, author George Orwell explained that effective “doublethink” was to say or label something the opposite of what it really is. Trump’s philosophy of business is that anything that gets in the way of profit “hampers business”. Regulations to protect consumers are of no interest to the current US government leadership.

Network neutrality is based on the principle that all internet traffic should be treated equally, a concept made explicit by the Federal Communications Commission (FCC) under President Barack Obama. Internet traffic includes messages, files and data sent over the internet. There is no cost difference between an email and a downloaded movie, between files sent to the office, selfies or audio files sent to a friend.  Suppliers are paying for the data used, not the type of content.

However, a recent plan by the FCC to dismantle these rules that ensure equal access to the internet and which prohibited companies from charging customers extra for high-quality streaming and other services, is a setback for net neutrality in the US.

With the invention of the telephone 140 years ago, the principle was set that the content of a phone call did not impact the cost of the call. The guiding principle in making the internet open and fair was the belief that it is a public information network and was most useful if all content coming into the network (and at the user-end through computers, mobile devices, video game consoles)—was treated equally.

The explosive growth of smartphones in the US as well as in India has enlarged the use of the internet. It now connects commercial services in retail, medicine, social media, in fact, just about everything—to consumers. While fortunes have been made on the internet in software and consumer electronics, the demand for data has not been as exploitable as desired by certain classes of business.

Powerful business interests with friends in the Trump Administration have suggested that campaign funds are contingent on removing any barriers to greater profit. These corporate interests blame net neutrality. The Republican Tax Plan, less reform than robbery from the poor to benefit the wealthy, recognises this hostage demand. So, the Administration’s approach is to create a new Gilded Age of rich and ostentatious living like that from 1860 to 1896.

“When someone shows you who they are, believe them the first time,” wrote American writer and poet Maya Angelou. Actions in 1980 by Donald Trump, then a brash young real estate developer, foreshadowed his consistent approach to money and business.

He demolished the Bonwit Teller building in Manhattan to build Trump Tower. The Metropolitan Museum of Art asked him to donate a historical Art Deco relief that was part of the building’s entrance ornamentation from 1929. According to a New York Times story, Trump agreed, “if the price (to remove it) wasn’t too high”. The estimated cost was $32,000 but Trump instead ordered the demolition team to jackhammer it to bits, a cheaper approach. Trump “posing as a PR man” told The Times “the merit of these stones was not great enough to justify the effort to save them”.  (On the same project, Trump illegally imported Polish workers and then stiffed them on wages and working conditions. They sued and won.)

The timing of the net neutrality decision to ram this change through the FCC in December is intentional. The current FCC chairman is Ajit Pai, a Trump appointee who knows this is not a popular move with people. The holiday season distractions from Thanksgiving to New Year’s Day will make it harder for the opposition to mount a campaign against the rule change.

In just about every federal agency, there is evidence that only business interests count. The Administration is ready to gut the Consumer Financial Protection Bureau, the brainchild of Senator Elizabeth Warren, put in place under the Obama Presidency. It has saved 30 million consumers nearly $12 billion by sanctioning financial companies for abusive and unfair practices. It recently imposed regulations on payday lenders, who have usurious interest rates on the most vulnerable borrowers in the nation. You can guess that this industry donated substantially to the Trump election campaign.

The Interior Department’s desire to allow extractive industry exploitation of federal land or the Environmental Protection Administration’s rollback of regulations on water and air pollution are just two more examples of how the Republican Party’s control of government is totally focussed on people and businesses that make big money.

For families in the US, median income, adjusted for inflation, has risen just 1.5 percent since the Recession of 2008. However, the total annual economic output of the US has grown by 150 percent in that period. So where did the money go? Paid to investors as dividends and the profits from sales of business assets. The past decade has shown that people who own a lot of financial capital win big. Middle and working classes do not win.