The court takes centrestage in America 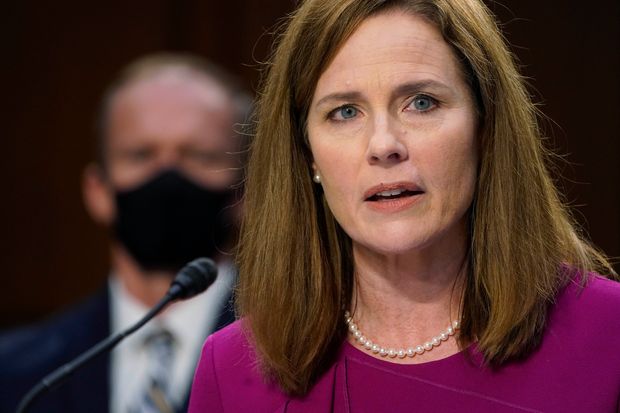 Given the political partisanship fracturing America, US President Donald Trump’s Supreme Court nominee surprised no one at her Senate confirmation hearing. Appeals Court Judge Amy Coney Barrett told the committee she has no views on climate change relevant to the court. She couldn’t say Trump’s policy of having small children separated from their immigrant parents at the border was wrong.

Republican senators pretend the Supreme Court and Barrett are “non-political entities” and that there is no way of knowing how she’ll rule as a Justice. They toss her softball questions and applaud her career, never asking about abortion, same sex marriage, the Obamacare medical plan or gun control, all threatened if the court’s conservative majority is extended to 6-3 with Trump’s third appointment.  The Republican senators really don’t care about appearances because they expect her appointment will solidify conservatives wavering over Trump’s behaviour and Covid-19 leadership.  They know this ends with a Republican majority the Democrats can’t stop. They need to maintain majority in the court to enable undoing legislation done by a Democratic majority in both Houses of Congress, which is likely from the coming election.

Democratic Senators realise her answers are meant to suggest she was so busy raising seven young children that she paid little or no attention to news and politics for a decade, especially to what President Trump says and tweets. Generally most federal judicial appointees have little to say about actual cases and controversies in their confirmation process. Democratic politicians forgo questions in favour of a choreographed campaign attack on Trump’s positions and policies. Their occasional question finds Barrett declining to answer. Kamala Harris, Democratic candidate for Vice President, is on the committee and suggested that laws enacted by the Congress but overturned by courts will cost Republicans’ victory in the future because Americans have adopted modern thinking on personal rights. A few purely theoretical legal ideas got discussed with Barrett insisting she is a textualist in the mode of the late Justice Antonin Scalia (for whom she clerked) merely interpreting the law as our 17th century founding fathers (no women) wrote it.

Meanwhile, President Trump returns to the campaign trail, just released from hospital and said to be free of Covid-19. He’s usually mask less as the coronavirus infection rates keep edging up in many sections of the USA. If his Supreme Court nominee is as she claims, “not a pawn of the president,” he might be in for a surprise when she joins the eight other Justices. Or not.  This is important enough for the Trump Administration to make the Senate Judiciary Committee hold confirmation while rest of the Senate has “gone fishing” back home for voters. For Amy Coney Barrett, it means lifetime employment. She was appointed in 2017 to the federal appeals court. Now just 48 years old, her tenure will be the longest in Supreme Court history if she lives to a ripe old age of 85. She replaces Ruth Bader Ginsburg, who died at age 87 last month.

For Democratic voters, the memory burns brightly that Republicans stiffed President Obama’s appointment of a Supreme Court Justice on the basis of 2016 being his last year in office. Rhode Island Senator Sheldon Whitehouse, who as a former federal US Attorney and former State Attorney General, knows something about how to lay out a case. “When you find hypocrisy in the daylight, look for power in the shadows.” He then spent his time describing the right-wing dark money behind the Republican takeover of the courts and the use of the courts to shift US policy ever to the right.

Why such haste? Two issues are in play–her potential role in any case involving Trump’s election and a critical Supreme Court case expected in November concerning Obamacare.  Trump hates that medical plan more because it has Obama’s name on it than anything Trump has been able to articulate. He needs a secure majority that he believes he can control.

Based on election results every two years the Congress reconvenes on January 3, and presidents are inaugurated every four years on January 20. President Trump’s re-election looks increasingly difficult based on polling statistics, with usually Republican-flavoured polls saying he won’t win several key states.

While the US lacks the multiplicity of political parties that exist across India, the election process itself is complicated by different rules among the 50 states. This year with enormous percentages of votes cast by mail, or early voting, counting will be slower than in the past. November 3 may be Election Day, but the campaigns have turned in non-stop events with elections now a “season” of nearly 90 days. What is startling this year is that early in-person voting and mail-in ballots are 15 times greater than at the same period in 2016. It’s possible that 25% of all voters will have already rendered their verdict before November 3.

Because several states do not allow any counting until Election Day, the season will start to feel like extra time in a football match. India will see some results by around 12:00 IST on November 4. But the absolute results could be several days or weeks later. All 50 states must report their popular votes totals by December 13, and then there is the Electoral College vote that is based on states won, not popular vote. (Hillary Clinton had 3 million more votes than Trump but lost the electoral vote) There is also the possibility of court cases challenging elections in various states to further drag this out.