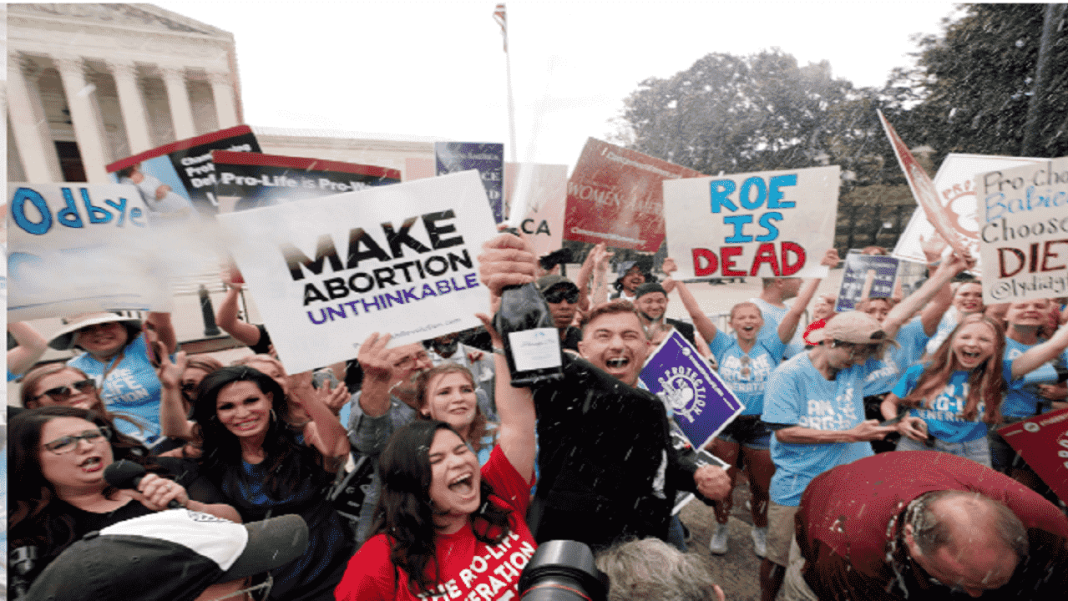 Proof that America is a conflicted nation is reflected by how you interpret two just announced 6-3 Supreme Court decisions.

On GUN RIGHTS: The ability to carry a loaded gun in public for “personal protection” expands by redefining the intent of the Second Amendment.

ON REPRODUCTIVE RIGHTS: A woman’s ability to choose an abortion as a family planning option is severely restricted by gutting the Roe v. Wade decision from 50 years ago, once considered “settled law.”

Both of these issues kept many voters emotionally tied to former President Donald Trump as his three court appointments shifted the Supreme Court’s ideological balance in the direction they wanted.

The half of the nation disappointed by the Court’s 17th-century view of interpreting the Constitution cannot escape that this happens as Trump is out of office. There is  irony with the concurrent probe into the January 6 insurrection revealing the former president to be a major player in planning the coup in violation of his oath of office. The 21st-century electronic evidence and sworn testimony from his associates demonstrate his culpability.

Regardless of what happens to Trump, his role in changing the federal courts will be his legacy. It is proof that elections have consequences. The protests and response to this will impact a nation already struggling with sharp ideological differences heading toward November elections.

The reality of these legal decisions accomplishes a multi-decade effort by Republicans to shift the Supreme Court away from the use of ”stare decisis,” the legal concept that prior decisions have relevance in ascertaining the validity of new cases. The abortion decision is not surprising, as a draft of Justice Samuel Alito’s reasoning leaked several weeks ago. He told his Senate confirmation hearing in 2005 that he viewed the abortion rights landmark as an ‘important precedent.’ Seventeen years later, he changed his attitude with a strident opinion that four colleagues signed.

The three liberal justices —two are women—strongly dissented, charging that the majority failed to consider how abortion rights shape the fabric of women’s lives.

Their dissent says the Court should overturn earlier precedents only upon changes in legal doctrine. When the earlier decisions were only a few years old and didn’t have the chance to set many precedents, or when fundamental changes make the earlier decisions obsolete. “None of those factors apply here: Nothing — and in particular, no significant legal or factual change — supports overturning a half-century of settled law giving women control over their reproductive lives.” Justices Stephen Breyer, Sonia Sotomayor, and Elena Kagan wrote rather bluntly, “The Court reverses course today for one reason and one reason only: because the composition of this Court has changed.”

In Alito’s view, “fear that our decision will imperil” rights to contraception access, same-sex marriage, and sex with members of the same sex were “unfounded.” However, Justice Clarence Thomas, in a concurring opinion, said the Court should “reconsider” rulings that protect contraception and same-sex marriage based on privacy rights under the 14th Amendment of the Constitution.

So, the abortion case reflects a religious and ideological position that the rights of a fetus begin at the moment of conception. Supporters of this position define themselves as “Pro-life.” Many have scant recognition of any contradiction with expanding the right to carry guns in public when firearms violence spikes and the killing of school children is alarming.

While violence may have a lot to do with mental health issues, the easy purchase of guns does not help. The Supreme Court struck down a 100-year-old New York State law that set a high bar for people to get conceal-carry permits. The state required permit-seekers to prove that they faced more significant risk than usual when out in public. Justice Clarence Thomas wrote that the right to bear arms includes a right to carry a gun for self-defense purposes outside the home under the Second Amendment.

His decision reflects his belief that only gun regulations consistent with historical regulation of guns are permissible. Where does that leave Red flag laws and computerized sales databases, all of which are modern inventions? Domestic abusers did not often appear in 17th and 18th-century legal cases. Today banning their gun rights are the result of society moving in new directions on human rights.

This week the US Senate passed a modest set of regulations to control gun sales in the wake of a Texas mass shooting that also involved failures by law enforcement. The House quickly passed the Bipartisan Safer Communities Act by a vote of 234-193, with 14 Republicans joining every Democrat in supporting the bill. President Biden’s signature is guaranteed. The gun lobby contributes significant money to politicians, and you can see that 193 of them are aware of this. However, the new Second Amendment interpretation by the Court spells trouble for any gun regulation at the state or federal level that might reduce the affection for guns and violence in America. Gun makers and sellers are safe.